When we think of braces for scoliosis, the first thing we think of is a growing person wearing a brace to try and stop their scoliosis from progressing. In the traditional course of treatment, scoliosis braces don’t do much for adults in terms of correction, but if a well-designed brace is combined with an effective patient program, it can actually reduce a curvature.

Scoliosis braces aren’t just limited to adolescent use; they can be used in cases of adult scoliosis if they are designed properly and accompanied with a proactive patient program that keeps the spine straight and strong. First, let’s discuss some characteristics of adult scoliosis.

While the most common form of scoliosis is adolescent idiopathic scoliosis, meaning scoliosis with no known single cause diagnosed in adolescents, adults can develop the condition too.

The most common forms of adult scoliosis are adult de novo scoliosis and cases of adolescents that carried scoliosis with them into adulthood, when it’s first diagnosed.

Adult de novo scoliosis means the condition has developed in adulthood with no prior history of its development in adolescence. This can be the result of degenerative changes to the spine that occur as part of the aging process, or the result of another pathology, such as cerebral palsy or muscular dystrophy.

The most common form is carrying the condition from adolescence into adulthood. While it might seem surprising that a spinal deformity could go unnoticed for so many years, one of the condition’s most notable characteristics is how difficult it can be to diagnose.

Scoliosis varies greatly in severity, so it’s quite common for an adolescent to not know they have it until they reach adulthood. This is because scoliosis is rarely a painful condition in adolescence, and depending on the severity level, many of the postural changes that scoliosis causes can be too subtle for the average person to notice.

It’s often not until adolescents reach adulthood and stop growing that their scoliosis starts to produce noticeable symptoms like pain. When a spine is growing, such as in adolescence, there is a constant lengthening motion counteracting the compressive forces of scoliosis; it’s the compression of the spine, its nerves, and surrounding muscles that causes pain.

Once an adolescent with scoliosis reaches skeletal maturity and is no longer growing, this is when the condition is likely to become painful and alert them to the fact that something is wrong.

The most common time that these types of cases are diagnosed or dealt with are when people break 40 years of age.

What happens at this age is gravity is causing a compressive effect on the spine which causes pain and the curve to slowly progress. 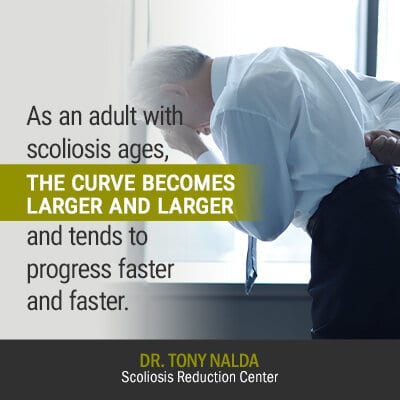 As an adult with scoliosis ages, the curve becomes larger and larger and tends to progress faster and faster.

While there’s no easy formula that can be applied to determine exactly how much or how fast an adult’s scoliosis is going to progress, the most common pattern is that as patients get older, their curvature increases as more time goes by.

In treating these types of cases, what we want to do is halt that progression. While there’s not a lot of long-term research regarding adult scoliosis, in my experience, almost every case of adult scoliosis will progress eventually; it’s only with treatment intervention that the progressive line can be altered.

The best method for altering the progressive line in adults with scoliosis is to combine bracing and rehabilitation. Here at the Scoliosis Reduction Center, this is our approach: to combine various forms of treatment to bring our patients the advantage of multiple treatment options.

Adults don’t wear scoliosis braces the same way that children and adolescents do. Most children wearing scoliosis braces will be wearing them full-time because getting a strong correction in the spine is the ultimate treatment goal.

In most cases, children will wear their brace until they are fully grown.

In the traditional treatment approach, adults wearing scoliosis braces aren’t wearing them for the same reason; bracing is more for support and pain relief.

Back braces for scoliosis in adults are generally not as much about getting a strong correction, so it’s not as aggressive a form of treatment. That being said, in our conservative approach here at the Center, we use adult bracing to augment other facets of treatment and also achieve some correction by reducing the curve and holding it.

Adult scoliosis braces are mainly worn part time, rather than full time as adolescents do. Part-time wearing for adults would approximate 4 to 12 hours a day, including nighttime.

If a scoliosis brace is being worn solely for pain relief, the patient will wear it for 30 minutes to an hour to help them get out of pain, and then they’ll take the brace off and continue on with their day.

Therefore, there are three main types of uses for braces in adults: supportive, part-time use, and pain relief.

When it comes to answering the question, “Do scoliosis braces work for adults,” it’s not until they are combined with other effective treatment forms that they have the potential to actually reduce a curvature and address the structural aspect of scoliosis. 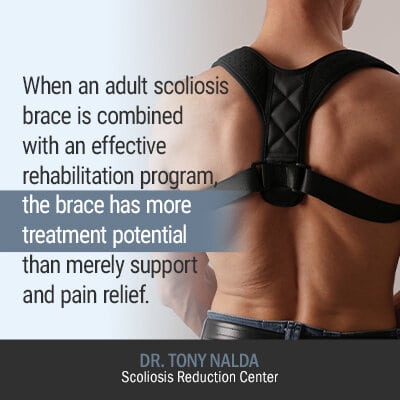 When an adult scoliosis brace is combined with an effective rehabilitation program, the brace has more treatment potential than merely support and pain relief.

Not only can a brace and rehabilitation stop a curve from progressing, it can alter that progressive line and help reduce the curve, stabilize the scoliosis, and hold that reduction.

This reflects the potential long-term results of treatment that combines braces for scoliosis in adults with rehabilitation. This combination can successfully alter that progressive rate, along with achieving a reduction and holding it to maintain those results.

When people ask me why braces for adults with scoliosis don’t help, the answer is that in the traditional scoliosis treatment approach, adult bracing is ineffective because they aren’t accessing the right type of brace.

In this treatment path, the boston brace is used. The boston brace is a squeezing-style brace that squeezes the spine in an effort to hold it where it is and stop the curve from progressing further; however, this doesn’t offer any reduction, and squeezing the spine immobilizes it, causing weakness and atrophy.

Obviously, this isn’t something they want to cause in adults, and as an adult would have to wear the boston brace full time to have any type of impact, this isn’t a sustainable treatment option that most adults would choose.

A squeezing boston brace is often referred to as a ‘supportive’ brace because its aim is to hold the scoliosis where it is and halt progression; what an adult with scoliosis needs is a ‘corrective’ brace with the potential to actually reduce the curvature and then hold that reduction.

With a corrective brace, such as the customized ScoliBrace, it works by applying a pushing pressure on the spine, instead of squeezing it; this means no weakness or atrophy.

Since the brace is pushing and not squeezing, patients can wear their brace for shorter periods of time and for a shorter total duration. The better outcome of reducing a curvature is reached far faster and more effectively with a corrective brace than with a traditional boston brace.

So do braces help for adults with scoliosis? The take-away here is that adult braces can be worn as part of an effective scoliosis treatment plan, but only if they’re designed properly and combined with other forms of treatment.

An interesting way to look at scoliosis braces for adults is to compare them to the results of spinal-fusion surgery. In spinal fusion, rods and screws are attached to the spine to hold the spine in a straighter alignment.

When you really think about it, what scoliosis surgery does is brace the spine from the inside. Just as the rods and screws are holding the scoliosis, the scoliosis brace, whether using squeezing or pushing, is performing a similar function on the outside.

The goal of scoliosis surgery is to prevent progression by creating scaffolding for the spine on the inside.

Where the outcomes differ is when comparing scoliosis surgery with a ‘corrective’ brace, such as the ScoliBrace; while the ScoliBrace does hold the spine in a straighter alignment just as the rods and screws would, the pushing force of a corrective brace first works to reduce the curvature and then holds that reduction.

While the goal of scoliosis surgery is to halt progression by holding the spine in place, the goal of a well-designed corrective brace is to first reduce the curvature to produce a structural change, and then to hold that reduction.

Basically, we’re doing the same thing with corrective bracing, just without all the risks and complications associated with invasive spinal-fusion surgery.

In terms of lifestyle, bracing also has more to offer as adults can remove the brace and do what they want to do. With scoliosis surgery, whatever the outcome of surgery is is permanent; there’s no adjusting or going back. If the surgery doesn’t go well, the only option for improvement is to have more surgeries.

In contrast, if things don’t go well with adult bracing, the worst thing that happens is we revisit and adjust. We can modify or tweak the design of the brace to make it more customized to the patient’s needs, or we can add some associative rehabilitation to supplement those brace results and get a better result.

When compared with scoliosis surgery, adult bracing carries far fewer risks, offers better results, is more affordable, and protects the strength and longevity of the spine.

In terms of traditional supportive bracing such as the boston brace, there are little benefits to offer adult patients, which is why it’s not often recommended; however, if a

well-designed corrective brace is combined with associative rehabilitation and other forms of treatment, the results can be very impressive.

When it comes to treating adult scoliosis with bracing, the goal is pain relief, support, and reduction.

In the traditional approach to treating adults with scoliosis, bracing is rarely recommended; however, this doesn’t speak to the efficacy of bracing as a concept, but rather to flaws in the design of the traditional boston brace most commonly used.

The end-goal of adult bracing for scoliosis also differs between the traditional and conservative approach; in traditional, it’s merely to stop progression, and in conservative, it’s to address the structural issue of the scoliosis by stabilizing it, reducing it, and holding that reduction.

Here at the Scoliosis Reduction Center, our approach includes the use of our customized ScoliBrace: a powerful corrective brace. When we combine the use of the ScoliBrace with an equally-effective chiropractic and rehabilitative approach, the results can be very impressive.