How to Check for Scoliosis in Adults

When scoliosis is found in young children who have not yet reached adolescence, this type is called pediatric scoliosis; infant scoliosis falls under that umbrella. 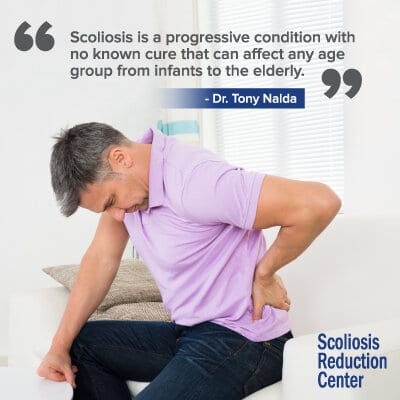 Scoliosis is a progressive condition with no known cure that can affect any age group from infants to the elderly.

As mentioned earlier, the number-one known cause of progression is growth. Individuals with the most growth to go through are at the highest risk of progression. As scoliosis tends to worsen during times of growth, it can affect young people who have not yet reached the peak of their adolescent growth spurt more than anyone else.

Fortunately, when it comes to monitoring potential growth, there is an indicator that is visible on X-rays, and this can help determine how much more growth an individual has yet to go through.

The Risser Sign refers to the level of pelvic calcification as an indicator of skeletal maturity. This information can be very useful in predicting how much more a child will grow. Measured on a scale of zero to five, five indicates adult skeletal maturity levels. Generally speaking, the higher an individual's Risser score, the less likely it is that their curve will progress.

While successful treatment often depends on catching a progressive condition early on, with scoliosis, the condition is hard to spot until it has progressed to a certain degree. Once a curvature worsens to the point where postural changes are noticeable to someone other than a scoliosis expert, this is often the time individuals or their caregivers will seek help from a medical professional.

When an individual with scoliosis is growing, there is an absence of pain as the upward growth motion is lengthening the spine. Adults experience scoliosis-related pain very differently as they have stopped growing; in these cases, a curvature causes compression of the spine and its surrounding nerves and tissues. This is why it’s quite common to see an adult with a condition they’ve had throughout adolescence that has just recently become symptomatic.

Keep reading: Dowager’s Hump: What Is It, Symptoms, Diagnosis, & Treatment

While the vast majority of adult idiopathic scoliosis cases are extensions of undiagnosed adolescents with the condition, there are some additional known causes. For cases of individuals developing scoliosis in adulthood, natural aging and degenerative processes are thought to contribute to the condition’s development.

A paralytic curve can develop in adulthood when the spine’s surrounding muscles aren’t working properly. Over time, this can throw the spine out of alignment. Paralytic curvatures can develop as a result of spinal cord injuries that precede paralysis.

Scoliosis that develops in adulthood can be the result of a secondary condition like osteoporosis. As people age, especially women, they can experience a loss of bone mass; this can lead to compression fractures of the spine and the development of scoliosis.

The degenerative effects of aging can cause scoliosis to develop later in life as the spinal discs and vertebrae wear along with the rest of the body. If a vertebrae slips out of alignment, putting more strain on the discs, this can result in the development of an abnormal spinal curvature.

How to Diagnose Scoliosis in Adults 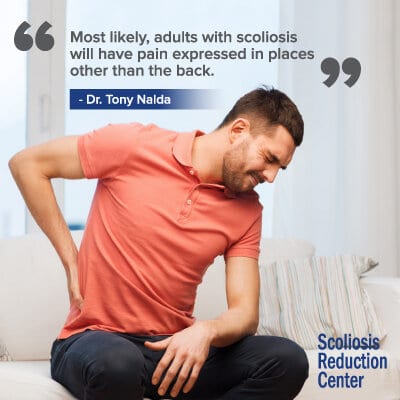 The vast majority of adult idiopathic scoliosis cases are adolescents that continued to age with their condition undiagnosed. Cases of individuals who develop the condition in adulthood most likely result from neuromuscular disease, the spine’s surrounding muscles not functioning properly, a secondary condition like osteoporosis, or the degenerative effects of aging.

When it comes to how to check for scoliosis in adults, the process is similar to how most cases are first diagnosed: visual assessment and X-rays. Most cases of scoliosis are diagnosed because of noticeable postural changes that cause individuals and their caregivers to realize something wrong is happening within the body. When it comes to adults with scoliosis, it is often pain, as well as postural changes, that brings them in to see me.

Regardless of when or why an adult develops the condition, there is always hope with effective treatment options like the chiropractic-centered approach we offer here at the Scoliosis Reduction Center.