Dowager's Hump: What Is It, Symptoms, Diagnosis, & Treatment

Everyone has a natural range of curvature degrees in each section of the spine, but when a spinal curve falls beyond a normal range, spinal biomechanics are disrupted, and this can impact the spine’s overall health and function. A dowager’s hump can develop when the thoracic spine’s kyphosis becomes excessive, also known as roundback.

Dowager’s hump is an outdated term for kyphosis: the medical term for an excessively-rounded upper back and shoulders. Kyphosis is a type of spinal curvature that bends outwards, away from the body’s center in a reverse-C shape. Excessive kyphosis, aka hyperkyphosis, can cause a number of symptoms.

Before getting into the specifics of how a dowager's hump develops, let’s first touch on some basic spinal anatomy, for a better understanding of the spine’s different curvature types and why they’re important.

The Spine and its Curves

The spine is made up of vertebrae (bones) stacked on top of one another in a straight and neutral alignment, separated by intervertebral discs, and in order for the spine to function optimally, the vertebrae need to stay in place so the spine’s natural alignment and curves can be maintained; however, there are a number of causes for the spine becoming misaligned and developing an unnatural curve.

The spine has three main sections: cervical (neck), thoracic (middle/upper back), and lumbar (lower back).

Each spinal section has its own characteristic curvature type. The cervical and lumbar sections have lordotic (lordosis) curves that bend forwards, towards the body’s center, in a ‘C’ shape, while the thoracic spine has a kyphotic curve that bends backwards, away from the body’s center in a reverse-C shape.

When these curvatures become excessive and over-pronounced, their curvature degrees fall beyond a normal range, causing a number of symptoms and spinal issues.

So when a dowager's hump develops, what types of symptoms can one expect?

As mentioned, a dowagers hump is an excessive kyphosis of the thoracic spine, and the most noticeable symptom is a roundback appearance as the upper back and shoulders develop a pitched-forward posture.

As the spine works in tandem with the brain to form the central nervous system (CNS), a complex network that facilitates brain-body communication, spinal conditions can cause numerous effects felt throughout the body.

There are 31 pairs of spinal nerves, and each pair connects the spinal cord to a section of the body.

When the spine is unnaturally curved, this can affect nerve function, and depending on the degree of nerve involvement, in addition to a roundback appearance, a dowagers hump can cause additional symptoms:

So now that we have answered the question, what is dowagers hump, and discussed the types of symptoms that can be expected, let’s move on to how a dowagers hump diagnosis is reached.

When it comes to recognizing the development of a dowager's hump, in addition to the postural changes it causes, it’s often back/radicular pain that brings adults in for a diagnosis and treatment.

To diagnose hyperkyphosis, here at the Scoliosis Reduction Center, I would first conduct a physical exam that involves taking a patient’s medical/family history, particularly if there is a higher incidence of certain spinal conditions within the family.

Part of a physical exam is observing a patient’s posture and gait; I can tell a lot about a person’s condition by their overall posture and how they walk.

A spine’s misalignment and related asymmetrical postural changes are more visible when in a forward-bend position, so I often conduct an Adam’s forward bend test and examine patients in several different positions to get a good idea of what’s happening with the spine.

A dowagers hump is officially diagnosed if the excessive kyphosis is 50+ degrees, and this is determined by conducting an X-ray and measuring the degree of thoracic kyphosis. 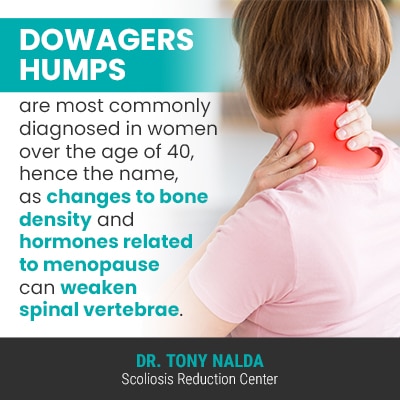 Dowagers humps are most commonly diagnosed in women over the age of 40, hence the name, as changes to bone density and hormones related to menopause can weaken spinal vertebrae.

Once a dowagers hump diagnosis has been reached, there are different treatment options available, shaped largely by the condition’s underlying cause.

Treatment for a dowager's hump will depend on its underlying cause, in addition to condition severity and experienced symptoms.

As is the case with many spinal conditions, there are different types that can develop, based on varying causative sources.

When it comes to a dowagers hump, the three most common condition types are known as postural, congenital, and Scheuermann’s, so let’s touch on how treatment might differ from one type to another.

Let’s start with the most common, known as postural kyphosis.

Postural kyphosis is the simplest form of dowagers hump to treat because it’s not a structural condition, meaning it’s not caused by a structural abnormality within the spine itself.

As the name suggests, postural kyphosis is caused by chronic poor posture that can put pressure on the vertebrae of the spine that changes their position over time.

Also known as tech neck, forward head posture can develop from constantly looking down at a screen and increasing the weight of the head on the vertebrae of the cervical spine and upper back, and this can contribute to the development of a dowagers hump.

Additional lifestyle choices such as carrying excess weight can also be a factor.

As postural kyphosis is not structural, it’s the simplest form to address and can generally be treated with lifestyle guidance, condition-specific stretches/exercises, and physical therapy; dowagers humps that are structural are more complex to treat, and can start to develop in utero.

In congenital kyphosis, infants are born with the condition due to a structural malformation in the spine that occurs as it develops in utero.

As the spine is developing, when one or more of the vertebral bodies are misshapen, they can’t be aligned naturally on top of one another, and as a result, the spine curves and becomes excessively rounded.

In most cases, misshapen vertebrae involve the front edges not developing properly, often forming into a wedge shape, causing the spine to be misaligned.

Some cases of congenital kyphosis are idiopathic, but most are caused by a misshapen vertebral body in the upper back.

When it comes to treatment for congenital kyphosis, it’s complex due to patient age and the fact that it’s a structural condition.

Treatment plans have to be adjusted to account for the unique challenges of treating such young patients, and monitoring for progression is important.

While bracing can be effective in some patients prior to reaching skeletal maturity, some cases of congenital kyphosis receive surgical recommendations.

Another type of structural dowagers hump is known as Scheuermann’s kyphosis.

Scheuermann’s kyphosis is a structural condition that develops over time, most often during periods of growth.

As a structural condition, it’s caused by structural abnormalities within the spine. For example, in a healthy spine, the vertebrae are rectangular in shape, making them easily sit on top of one another in a straight and neutral alignment.

In Scheuermann’s kyphosis, one or more vertebrae can have a defect, where the fronts don’t grow as fast as the backs, causing them to become more triangular in shape and wedged together and forward: roundback appearance.

A structural dowagers hump of this nature will have a thoracic kyphosis of over 50 degrees.

In terms of treatment, the design of treatment plans will depend on a number of factors such as patient age, severity, and symptoms.

While every case is different, combining different treatment disciplines such as condition-specific chiropractic care (adjusting most-tilted vertebrae back into alignment with the rest of the spine), a variety of physical therapy exercises to help strengthen the spine and its surrounding muscles so the spine can be better supported/stabilized, and when necessary, corrective bracing to augment treatment and prevent further progression.

Bracing can be an effective form of treatment for addressing progressive structural spinal conditions such as a dowagers hump, and in general, bracing is most effective on patients who have not yet reached skeletal maturity.

While every case is different, ideally, a dowagers hump correction brace should be used at the onset of puberty and worn until skeletal maturity is reached.

There are different types of braces, and the treatment provider will choose one that is most appropriate and specific to patient age, condition type, and severity. 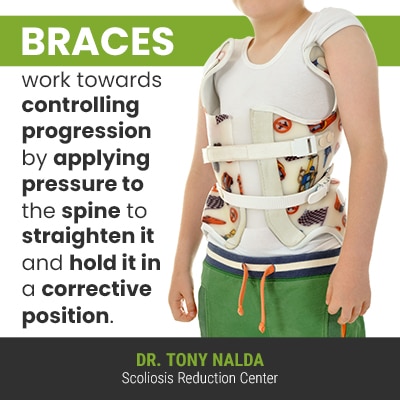 Braces work towards controlling progression by applying pressure to the spine to straighten it and hold it in a corrective position.

Bracing is not as common a treatment option for adults and patients who have reached skeletal maturity, unless the brace is being used more for spinal stability and pain management than actually reducing a curve and/or stopping progression.

While dowagers hump is an outdated term for kyphosis, aka hyperkyphosis, the condition involves an excessive forward-rounding of the upper back and shoulders.

There are different types of dowagers humps with varying causes, the most common being postural, congenital, and Scheuermann’s.

Dowager's hump symptoms are case-specific but commonly include a roundback appearance, neck and back pain, and depending on the degree of nerve involvement, radicular pain, tingling, and/or numbness can be felt throughout the body.

In addition, if left untreated, or not treated proactively, symptom severity can increase including bowel/bladder issues, problems with balance and coordination, and lung impairment.

Here at the Scoliosis Reduction Center, I have experience treating a wide variety of spinal conditions, both structural and nonstructural, dowagers hump included.

For structural dowagers humps, treatment is more complex and has to address the condition on a structural level; I do this with condition-specific chiropractic care, and through a variety of condition-specific exercises and forms of physical therapy, I help patients improve spinal strength and strengthen its surrounding muscles so they can provide optimal spinal support.