How Does Scoliosis Affect Your Posture?

There are three severity levels that characterize scoliosis: mild, moderate, and severe. Scoliosis can affect posture in different ways, depending on the severity level of the condition.

If you or a loved one suspects scoliosis, you should see a specialist for an official diagnosis. I always recommend seeing a scoliosis specialist because they know what to look for and how to read scoliosis X-rays to get a full understanding of the condition.

Scoliosis sounds extreme and seems like a condition that would be easily diagnosed, but that is not the case. As a progressive condition, an individual can go through different stages as the symptoms become more noticeable and extreme. 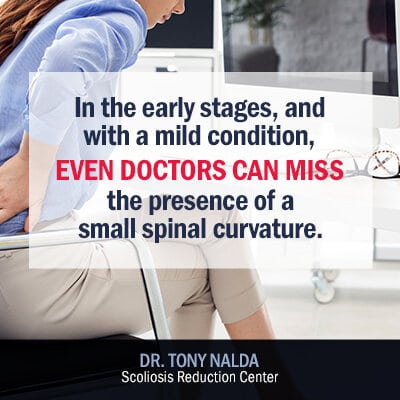 In the early stages, and with a mild condition, even doctors can miss the presence of a small spinal curvature. This is unfortunate because when the condition is caught early, treatment can be started to increase chances of success.

Here at the Scoliosis Reduction Center, patients that come to me in the early stages of their condition experience the greatest levels of successful treatment and are more likely to achieve a reduction and slow or stop the condition’s progression.

In addition to the fact that if you’re not an expert, it’s not easy to spot a spinal curvature, another factor that affects the challenge of diagnosing the condition is an absence of pain, in many cases.

Pain with scoliosis is most affected by growth, and growth is the number-one cause of rapid curvature progression. A patient who is still growing has a spine that is continually lengthening and growing upwards. An adult with scoliosis who has finished growing has a very different experience with pain as compression comes into play.

Instead of the lengthening growth motion of the spine that adolescents and children are going through, an adult with scoliosis will experience compression. Compression puts pressure on the spine and its surrounding nerves and tissues; this is what causes the bulk of scoliosis-related back pain.

The fact that the largest group of people with scoliosis, adolescents, don’t experience a lot of pain with their condition has a big impact on diagnosing the condition. Just think of the main factor that gets you in to see a doctor: most likely experiencing pain and discomfort.

Pain plays a crucial role in protecting the body. It tells us something is wrong, and this is what most often sends us, or prompts us to take our loved ones, to find out what is happening and causing the pain.

This leads us to one of the biggest challenges with treating scoliosis: early diagnosis and treatment.

Defining a Condition as Mild, Moderate, or Severe

At the time of diagnosis, X-rays will be taken from a number of angles to get a complete understanding of what is happening with the spine and where the curvature is located along the spine.

In addition to the degree of spinal curvature, X-rays can tell us how much the whole body is growing and how much the spine is growing. This is important information to have moving forward with a treatment plan as the rate of growth tells us how hard we have to work to control progression.

Cobb angle is a measurement taken via an X-ray that places the condition on the severity scale based on how much the spine deviates from a normal alignment. How far the spine curves and twists away from a straight alignment is measured in degrees.

Once the Cobb angle is measured, the condition can be fully assessed and a treatment plan can be started.

Knowing where the condition lands on the severity scale is important because it helps us determine the best possible course of treatment moving forward. Each stage of the condition carries with it different challenges and symptoms. Knowing where we are will helps us prepare the patient for what to expect.

A mild scoliosis diagnosis will be given with a curvature as minor as 10 degrees and up to 25. Postural changes are fairly minimal and often hard for patients and their caregivers to spot at this stage.

The thing to remember is that scoliosis is progressive, meaning the condition’s natural path is to worsen. Our chiropractic-centered approach is most successful at this stage and offers the highest chances of reducing or halting a patient’s progression. The earlier scoliosis is caught and treatment initiated, the less likely a patient’s condition will progress to the point where surgery is recommended.

Posture changes during this stage are subtle. Knowing what to look for is important and can make the difference between reaching a diagnosis during the early stages when the condition is at its most treatable, or having to tackle treatment when the condition has already progressed significantly.

Following are the ways mild scoliosis affects posture and the signs to look for:

When it comes to the ways in which mild scoliosis affects posture and early signs of scoliosis to look for, an overall asymmetrical appearance of the body is what you can expect and what to look for.

Patients with moderate scoliosis have a curvature measuring between 25 and 40 degrees, and this is where the majority of diagnosed patients land. In the moderate stage, the condition has already progressed past mild, and this is the stage many of my patients are in when they come to me for diagnosis or treatment.

Symptoms and postural changes are more noticeable during this stage, which is why the vast majority of patients are diagnosed in the moderate stage.

Those living with moderate scoliosis exhibit some common postural changes and symptoms:

When describing the physical appearance and posture of my patients, I like to use an analogy that is easily understood by everyone. Think of building a snowman. Consider how that snowman would look and function if that middle snowball were off-center; it doesn’t just affect the center point, but also how the other parts of the body are supported.

As you can imagine, once scoliosis has progressed into the severe stage, the aforementioned symptoms and postural changes associated with mild and moderate scoliosis become even more severe and pronounced.

One of the main changes to posture that occurs is what’s called ‘flat-back syndrome’. When someone with scoliosis exhibits this appearance where the back appears flat from the side, this is a big indicator that progression will be a factor.

Many people assume that once scoliosis has progressed to severe levels, less-invasive alternative treatments are no longer possible, leaving spinal-fusion surgery as the only option. While every case is different and requires its own unique treatment approach, it’s never too late to initiate treatment, and there are still many options, outside of surgery, to consider.

As the spine affects virtually every system in the body, it’s understandable that once the condition progresses into the severe stage, its effects can be felt in multiple areas of the body:

Changes in Posture and Body Symmetry 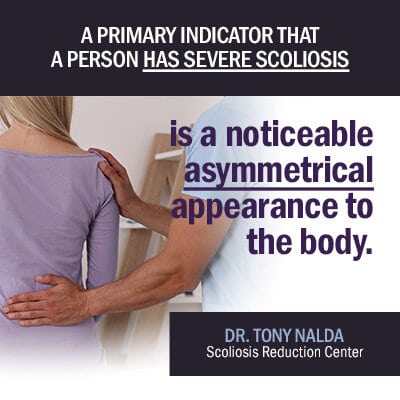 A primary indicator that a person has severe scoliosis is a noticeable asymmetrical appearance to the body. This can include the head, shoulders, and hips appearing off-centered. It’s not uncommon for one leg to appear longer than the other and the arms can appear uneven in length as well. The waist can appear asymmetrical with one side appearing flatter than the other. There is also a telltale rib-hump that is common and quite pronounced at this stage where one side protrudes more than the other.

The lung’s ability to perform and move air can be impacted during the severe scoliosis stage as well. The more severe the curvature is, the more it can impair lung function. These effects are most strongly felt during physical activity and exercise when the lungs are working their hardest, but they can also be evident during times of rest. This can also affect sleep as difficulty breathing is an issue.

Pain in the Neck, Back, Legs and Head

A severe spinal curvature affects the body’s nervous system. This is evident when patients suffer from chronic pain in the neck, back, and legs. Muscle tension and headaches that can reach migraine status are also possible as the spine’s cerebrospinal fluid levels can be impacted. These symptoms can also affect posture as patient’s struggle with pain management and how to hold their bodies in less-painful positions.

Proprioception is defined as the body’s ability to recognize its position without visual cues. If you close your eyes, you can likely still maintain balance and an awareness of your body’s position; for people with scoliosis, this can be a challenge.

While an average person can balance on one leg with their eyes closed for 30 seconds or more, a person with scoliosis would likely be unable to or would find it very challenging.

With any progressive condition, early diagnosis is key. Unfortunately, this represents one of the biggest challenges with treating scoliosis as its symptoms and postural changes are often too subtle to be spotted and diagnosed early on.

Each stage of the condition - mild, moderate, and severe - has its own markers and symptoms. The main ways in which scoliosis affects posture is in symmetry. As the condition moves from mild to severe, the body’s overall symmetry is affected.

The above symptoms can affect multiple systems within the body, and the ways in which a person carries themselves and holds their bodies, known as posture, is the most noticeable visual effect of scoliosis.