As a spinal deformity known to affect posture and, in severe cases, lung function, scoliosis can affect a person’s singing ability. As singing is breathing and breathing is posture, you can see how scoliosis could impact a person’s voice. In order to address the issue, the underlying nature of the problem, the scoliosis, has to be treated effectively.

Before I start talking about scoliosis-related postural changes, I would like to be clear on how much scoliosis varies from patient to patient. Multiple factors feed into condition characteristics such as severity of the curvature, cause (if known), location of the curvature along the spine, and age of the patient.

While early signs of many forms of the condition are postural changes, these changes can range from barely noticeable to obvious and extreme. Ranging from mild to moderate and severe, what one scoliosis patient experiences is not necessarily indicative of what another person is likely to go through.

When scoliosis develops, this means there is an abnormal spinal curvature that bends to the side and rotates. This bend and twist doesn’t just affect the spine, but multiple other areas of the body.

When the spine loses one or more of its healthy curvatures, the function that those healthy curvatures perform is impaired: strengthening the spine, facilitating its flexibility, and allowing us to maintain a straight and upright posture.

While early signs of scoliosis are postural, these are often difficult to spot, especially if the condition is mild to moderate.

Changes to posture can include an overall asymmetrical appearance to the body with shoulders that sit at different heights, one shoulder blade protruding more on one side, a rib arch, uneven hips, an uneven waistline, and limbs that seem to hang at different lengths.

These symptoms tend to get more pronounced and easier to spot as the condition progresses. In severe scoliosis, the abnormal spinal curvature can often be seen with the naked eye and is likely visible to average people, other than scoliosis specialists who know what to look for.

In addition to postural changes, a misaligned spine caused by scoliosis can also shift a person’s center of gravity and change their walk. 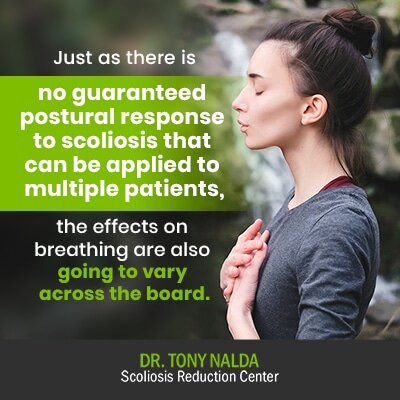 Just as there is no guaranteed postural response to scoliosis that can be applied to multiple patients, the effects on breathing are also going to vary across the board.

For patients who do experience scoliosis-related lung impairment, this is due to the abnormal curvature contorting/compressing the rib cage so the lungs don’t have the space they need to inhale/exhale deeply.

Typically, it’s not until a condition progresses into the severe stage that lung impairment can become evident, and even in these cases, it’s often not functional.

In other words, for an average person with average respiratory demands who engages in average forms of physical activity, even if scoliosis has caused some changes to breathing, these changes are unlikely to impact their ability to live out their daily life; however, for professional athletes or those that place more demands on their respiratory system, this could cause more of an issue.

When thinking of average patients who enjoy singing as a hobby, these people are not necessarily exerting themselves to the level that a professional long-distance runner might; however, there is a connection between postural alignment, breathing, and voice production.

Again, for an average patient who likes to sing casually as a hobby, scoliosis might not cause noticeable functional issues, especially if they are undergoing active treatment or their condition isn’t particularly severe; however, for a professional opera singer, let’s say, with severe scoliosis, it’s more likely that their postural misalignment could impact breathing and their ability to sing optimally.

It can also be hard for a person with scoliosis to stand for long periods of time. Considering the mechanics of singing, taking deep breaths from the diaphragm and controlling the intake/release of that breath, all while maintaining good standing posture, optimal singing ability can be affected.

The high thoracic and cervical spine (middle/upper back and neck) and head position also play a role in singing: vocal resonance and controlling pitch. This makes sense considering these spinal sections are most closely located to the lungs and throat and are engaged in the functioning of the respiratory system and the vocal tract.

There is also a connection between muscle length-tension relationships and postural alignment, and we know that scoliosis introduces adverse tension to the spinal cord and its surrounding muscles and nerves.

For example, if a patient has what’s commonly known as ‘forward head posture’ due to an abnormal thoracic or cervical curvature, an implication of this is a pharynx (part of the alimentary canal extending from the nose to the larynx) that experiences a narrowing change in shape due to the shift in posture. 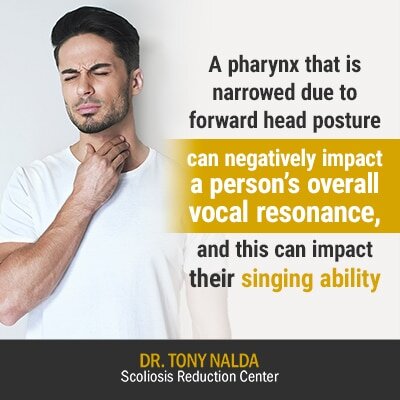 A pharynx that is narrowed due to forward head posture can negatively impact a person’s overall vocal resonance, and this can impact their singing ability.

Just as exercise plays a large role in the treatment of scoliosis in general, there are specific exercises that can be applied to address forward head posture in an attempt to restore vertical placement of the larynx (voice box containing the vocal cords).

Any scoliosis-related symptom needs to be addressed by treating its underlying cause: the scoliosis. Treating one symptom or one component of the spinal deformity will only produce short-term results.

In order to effectively treat scoliosis, and address a singer’s concern for their voice, the underlying structural nature of scoliosis has to be addressed and treated first and foremost.

Here at the Scoliosis Reduction Center, our ultimate goal with every treatment plan is to achieve a curvature reduction at a structural level; that way, any scoliosis-related deficits or symptoms are alleviated/eliminated as the spine’s healthy curvatures are restored.

This isn’t always easy and involves a lot of dedication and work on behalf of the patient, but those efforts can have big results in terms of helping a person with scoliosis live their best life and continue pursuing their life’s passions.

Our treatment approach is integrative, meaning we combine multiple treatment disciplines so we can fully customize each and every treatment plan; these disciplines include scoliosis-specific therapy, rehabilitation, chiropractic adjustments, and corrective bracing.

For patients experiencing forward head posture as a complication of their scoliosis, we would focus the exercise component of their treatment on strengthening the neck flexors, retractors, and muscle groups to restore proper vertical placement of the larynx; this would help singers with vocal resonance and pitch control.

Regardless of the type or location of the curvature along the spine, our treatment plans work toward addressing a postural misalignment by restoring as much of the spine’s healthy curves as possible, thereby reducing the adverse tension on the spine, improving its overall biomechanics, and improving upon experienced scoliosis-related symptoms and losses.

I have never treated two patients with the same treatment plan, nor have I seen two patients experiencing the exact same symptoms. I say this because it can be scary to read articles that discuss extreme examples of scoliosis and related symptoms, but in many cases, they are just that, ‘extreme’ examples, and aren’t indicative of the typical scoliosis experience.

That being said, it is important to acknowledge that particularly with severe forms of the condition, complications and adverse symptoms can present themselves.

The best approach to any form of scoliosis is to treat it functionally and proactively. Implementing a treatment strategy that stays ahead of the condition’s natural tendency to progress is key to managing progression and related symptoms.

For singers wondering just how/if their scoliosis will affect their voice, that answer can change from patient to patient. The more severe a condition is, the more likely it is to produce adverse symptoms, such as severe postural misalignment and breathing problems; however, even some severe forms don’t come with a lot of noticeable functional deficits.

The answer is also likely to change depending on the level of singing we are discussing: casual or professional. While a casual singer with severe scoliosis might not notice any functional changes to their voice, it’s possible that a professional opera singer, who would be placing more intense demands on their respiratory system and vocal tract, could experience some challenges.

While there are connections between postural alignment and voice production, and we know that the spinal misalignment caused by scoliosis can cause postural asymmetries, treating scoliosis effectively simultaneously addresses these related symptoms and complications.

If you are a singer undergoing scoliosis treatment, make sure that whomever is in charge of administering your treatment is aware of your concerns. As the nature of scoliosis necessitates a customized treatment approach, a plan can be tweaked to focus on strengthening the neck and the muscles that are engaged during singing, in addition to restoring the spine’s healthy curves.