What Does Scoliosis Affect?

Scoliosis is a progressive spinal deformity that can take many forms, depending on a number of variables. As the spine is such an important part of human anatomy, scoliosis can affect the body in a multitude of ways.

The Role of the Spinal Column

The spinal column is an intricate combination of nerves, bones, ligaments, joints, tendons, and muscles. The spine’s healthy curves give it strength and flexibility with the lower back (lumbar spine) and neck (cervical spine) having the most flexibility.

Experts agree that the spine has three primary functions. Firstly, it protects the spinal cord, nerve roots, and several internal organs. Secondly, it provides the body with structural support, which allows us to maintain balance and stand upright. Thirdly, it facilitates the body’s flexible motion.

The spine is an important part of human anatomy, and together with the brain, it forms the body’s central nervous system: passing messages back and forth between the brain, the spine, and other parts of the body.

Considering the spine’s many functions, it's clearer how the effects of a spinal deformity can be felt in areas of the body other than the spine.

When it comes to scoliosis in children, the condition can have little effect on the rest of the body. This is because in children, the spine is constantly growing, and that lengthening growth motion counteracts the compressive force of gravity that impacts the spine and its surrounding muscles, nerves, and tissues.

Because of this lack of compression, children with scoliosis typically don’t feel pain as part of their experience with scoliosis. In fact, the largest curve I’ve ever seen was a 155-degree curve on a child and that child was unaffected by pain.

Most often, when a child reports pain with their scoliosis, we know there’s likely another pathology at play. In those cases, we would look for tumors, a congenital, or neuromuscular condition that’s caused the scoliosis to develop.

Scoliosis in Adolescents and Adults 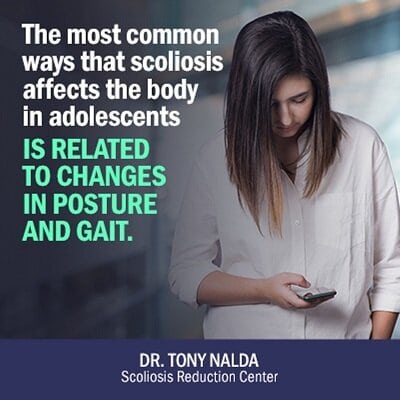 While adolescents don’t often have a lot of pain that accompanies their condition, they are also at a high risk for progression because they are growing so much. The most common ways that scoliosis affects the body in adolescents is related to changes in posture and gait.

Changes to Posture and Gait

There is a huge variance between how scoliosis affects one person to the next. Depending on the condition’s cause, age of the patient, and severity level, the degrees to which posture and gait are affected will also range.

There are, however, some changes to posture and gait that are commonly experienced with scoliosis, especially in more severe cases or when a condition is left untreated.

As scoliosis progresses, the abnormal spinal curvature gets more severe. Often, as scoliosis affects posture, clothing can appear to fit unevenly and hang lower on one side than the other.

As the spine loses its healthy curves, the body can respond by putting in bad curves, and this can lead to postural changes such as:

The way a patient walks tells me a lot about their condition. As teenagers are known for that adolescent slump, it can be especially difficult to spot changes in gait, but as scoliosis affects the body’s overall symmetry, it’s natural that the way a person walks is affected.

Adolescents with scoliosis often have arms that swing less. There can also be a reduction in the body’s natural counter-rotating motion that engages the hips and shoulders during walking.

In addition to the primary effects of scoliosis on posture and gait, especially in more severe cases or when a condition is left untreated to progress into adulthood, the following effects can also be felt.

How well the lungs perform can be affected by a person’s scoliosis. The more severe a curvature is, the more likely it is that it will affect the lung’s ability to move air. This impact is most often felt during exercise or times of exertion, but in severe cases, it can also be felt during times of rest.

Back and Radiating Pain

As the spine and brain work in tandem to form the body’s central nervous system, scoliosis can lead to a lot of pain and discomfort, although far more common in adults.

This can take the form of chronic pain in the back, neck, and can radiate into the shoulders, arms, hips, legs, and feet. Radiating pain can become an issue because of the nerves housed in the spinal canal.

We’ve all experienced sleep issues due to not feeling well or being in pain and discomfort. Scoliosis can cause a domino effect within the body, and when it comes to having an abnormal curvature of the spine, pain and lung impairment can greatly impact a person’s ability to get a restful sleep.

As the spine is connected to almost every system within the body, a spinal deformity can also impact the functionality of a person's digestive system. A spinal curvature can lead to difficulty digesting and an impairment of bowel function. 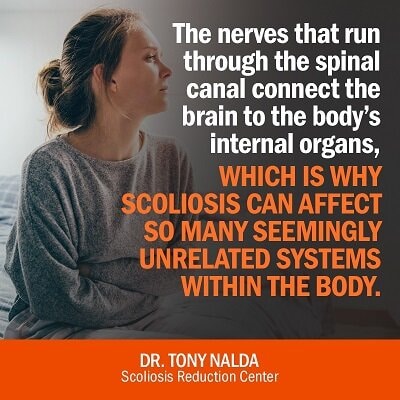 The nerves that run through the spinal canal connect the brain to the body’s internal organs, which is why scoliosis can affect so many seemingly unrelated systems within the body. Even a woman’s menstrual cycle can show signs of impact with irregularity.

A person’s balance and equilibrium can also be affected by scoliosis. While most people can easily balance on one leg with their eyes closed for short periods of time, this is a challenge for people with scoliosis as their proprioception can be affected. Proprioception refers to the body’s ability to understand its position without visual cues.

As the body’s overall symmetry is affected by its spinal curvature, its center of gravity can shift, causing issues with balance, equilibrium, and proprioception.

Scoliosis is associated with headaches for two main reasons. Firstly, tension headaches can develop due to the tight neck muscles that are trying to stabilize a cervical curvature; secondly, scoliosis is known to disrupt the flow of cerebrospinal fluid (CSF), leading to low levels of CSF in the brain, which is known to cause debilitating headaches that can reach migraine status.

When it comes to adults with scoliosis, they experience pain very differently from adolescents with the condition. Once a person reaches skeletal maturity, growth is no longer a factor. When this happens, the force that’s being exerted on the curved spine becomes compressive, affecting the spine, its surrounding muscles, nerves and tissues. This can result in varying levels of pain, depending on the condition’s cause, age of the person, and the curvature severity.

Many cases of adults with scoliosis aren’t classed as ‘de novo’, meaning newly developed in adulthood; they are simply adults that carried the condition with them from adolescence into adulthood.

In these types of cases, it’s often the pain that starts once growth has stopped that results in an official diagnosis. Often, adults experience their scoliosis-related pain in areas other than the back, most often the feet, knees, and hips. These effects are due to the lack of spinal alignment in the lower body.

When it comes to treating adults with scoliosis, the focus is reducing their curvature to where it was before they started experiencing pain.

When it comes to scoliosis and how it affects the body, every patient is different. Here at the Scoliosis Reduction Center, that variance informs our approach as we fully customize every treatment plan to address the symptoms the patient is experiencing.

While the condition can affect any age group, it’s mainly associated with adolescents; this is because the age group most commonly diagnosed with scoliosis is between the ages of 10 and 18.

While most people would expect pain to be a part of the condition, many don’t realize that pain is a side effect more commonly associated with adult scoliosis and that the pain is often expressed in areas of the body other than the back.

When it comes to adolescents and common side effects, postural changes and an overall asymmetrical appearance of the body are most common.

With conditions of a progressive nature, such as scoliosis, patients benefit greatly from early diagnosis. The sooner treatment is initiated, the more likely it is that a curvature can be reduced and progression can be slowed.