How Do You Know if Scoliosis is Affecting Your Lungs?

When a person receives a scoliosis diagnosis, their condition is further classified based on a number of factors: age of patient, location of the curvature, degree of curvature, and cause. Every case is different, and every patient has their own unique experience of living with the condition. When it comes to lung function and scoliosis, in the majority of cases involving average patients living average lives, if there is a lung-impairment issue, the patient is unaware. There is, however, testing that can be done to determine a patient’s lung capacity.

Although things are vastly improving, there is still a fair amount of misinformation out there regarding scoliosis. When people first receive a scoliosis diagnosis, snippets of information they may have heard over the years comes to mind, whether it’s accurate or not. Let’s think about some of the older data and theories that affect how people first process their diagnosis.

A lot of times, when I give a patient a scoliosis diagnosis, I can see the uncertainty in their eyes and can sense the thoughts that are racing through their minds. Some of these initial thoughts and fears are based on outdated data and theories that they’ve heard over time.

One of those fears is the fear that with scoliosis, the curvature can get so bad that it squeezes and bends the heart and lungs and can cause death. A lot of patients have these initial fears that aren’t based on actual facts, but outdated ideas surrounding the condition.

The truth is that it’s actually extremely rare, if ever, that a curve bends so much that it presses on an organ and causes death. While we do know that as curves progress, they can start affecting the function of organs, it’s unclear when and why it starts to affect lung tissue.

We are still not clear as to whether changes to lung function in scoliosis patients are more due to the bend in the spine, or its rigidity. Generally speaking, lung impairment can be a complication of severe scoliosis.

When Does Lung Impairment Become Noticeable?

When scoliosis starts affecting a patient’s lungs, this normally only happens in cases of severe scoliosis. This is primarily in thoracic curves (middle back), not lumbar curves (lower back), and in curves that are at least 40 degrees or more.

Most cases of scoliosis-related lung complications happen when a curve breaks 70 or 80 degrees, so we’re talking about severe curvatures. Even in cases of extreme scoliosis, lung impairment can be an issue for some, but not for others.

The only time we feel confident that lung impairment will be an issue is in cases of extreme scoliosis where curvatures are breaking 100 to 120 degrees; at that range, we can predict that lung function will be affected.

That being said, even in some of these extreme cases, a lot of the lung deficiencies are functional, meaning the patient won’t know they have a lung-function deficiency. They are likely going to be able to function on a day-to-day basis with average activities. Images of a person with scoliosis sitting around wheezing are inaccurate.

Only people who are really pushing themselves, in terms of intense physical activity, will experience a noticeable change to their lung capacity. Noticeable changes can include difficulty breathing through long bouts of exercise, shallow breathing, and feelings of not being able to catch a breath. 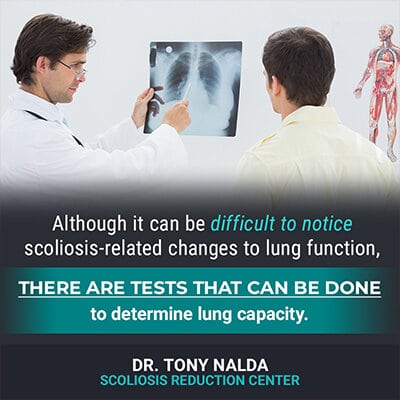 Average daily life for the average person won’t reveal a scoliosis-related lung deficiency; it’s only when someone like a long-distance runner or swimmer puts extra demand on their lung tissue and lung volume that they might notice an issue.

Although it can be difficult to notice scoliosis-related changes to lung function, there are tests that can be done to determine lung capacity.

Are There Tests for Determining Lung Capacity?

There’s not a lot of clear data on how and why scoliosis affects lung function, but fortunately, there are tests that can lessen the uncertainty and determine just how well a person’s lungs are functioning.

The best way we test for lung capacity in mild, moderate, or severe scoliosis cases is with a simple test called ‘spirometry’, and this test measures a patient’s ability to breathe out (lung-expiratory volume).

This is a basic elementary test that’s not the best around, but it’s far more accessible than its superior pulmonary-function test: plethysmography. This test involves sitting in an airtight glass cube, of sorts, as an instrument measures the changes in lung volume throughout the body. This equipment is extremely high end and not available in many places.

If a patient has a 50-degree curve and is experiencing lung impairment, the big question is what to do about it.

How is Scoliosis-Related Lung Impairment Treated?

When there’s scoliosis-related lung impairment going on, the bottom line is how to address it.

The traditional cell of surgery would respond with, “Well, if your scoliosis is affecting lung capacity, you need to have surgery to fix your scoliosis, and you need it now.”

In truth, there’s no evidence to suggest that surgery reducing a curve will improve lung capacity; in fact, the opposite is found as even though surgery can be successful in terms of making a curvature smaller, that comes at the cost of flexibility, and that rigidity can negatively impact lung capacity.

When the spine is held in a straighter alignment by hardware, such as rods and screws, there’s no longer flexibility in the spinal column, and that rigidity is linked to impairments in lung function.

When it comes to treating scoliosis-related lung impairments, here at the Scoliosis Reduction Center, our treatment approach is to first address the structural issue of the deformity. Once we’ve addressed the structural issue of the curvature with scoliosis-specific chiropractic adjustments, related symptoms, such as lung impairment, improve as the spine’s healthy curves can be restored.

When an unhealthy curve causes a rotation of the rib cage, there’s not enough space for the lungs to expand, and when that rotation is lessened along with the curvature, space is opened up for the lungs, improving function and lung capacity.

We can also test for lung capacity before and after treatment to monitor changes and improvements.

There’s a lot of misinformation out there regarding scoliosis. Part of the reason is because it’s such a complex condition and there’s still a lot we don’t know about it.

The larger a curvature is, the more likely it is that the person will experience scoliosis-related symptoms such as lung impairment; that being said, even in cases of extreme scoliosis, sometimes that lung impairment isn’t noticeable.

People with extreme scoliosis who are most likely to know their condition is affecting their lungs are athletes or people participating in high-impact high-intensity physical activities. In these cases, people could experience difficulty taking deep breaths while engaging in intense physical activity for long periods of time.

When a lung-capacity issue is detected, our treatment approach is to lessen the curvature that’s causing the impairment. Whether or not that impairment’s being caused by the bend of the spine or the rigidity of it, once the spine’s healthy curves are restored, the lungs are given more space to expand.

If you’re a person living with scoliosis and are concerned about your lung function, there are tests we can do to determine if you’re experiencing any form of lung impairment. In most cases, lung impairment associated with scoliosis remains functional and doesn’t cause a difference in every-day life.