Can Scoliosis Weaken Your Immune System? Does It Affect It?

The most common form of scoliosis affects adolescents between the ages of 10 and 18. Adolescent idiopathic scoliosis has been comprehensively studied both in terms of its effects on the body, and in terms of its etiology. While there has yet to be a clear single source identified to account for its development, there are multiple theories on the variables behind its causation, including the potential connection between scoliosis and immune response.

As the spine works with the brain to form the body’s central nervous system, conditions like scoliosis can affect the body in many ways. While scoliosis isn’t overly known to directly weaken the immune system, links have been found between immunity cells, inflammation, muscle injury, and scoliotic curves.

As the most common form of scoliosis is adolescent idiopathic scoliosis (AIS), we’ll focus our current discussion on this form. Due to the idiopathic nature of AIS, the condition has been explored in multiple ways, and while it has been considered a condition affecting bone, cartilage, and/or neuromuscular activity, the role of the immune system in scoliosis causation and progression is also being explored. Let’s first touch on the general role and function of the body’s immune system.

What Exactly is the Immune System?

We’ve all heard the term ‘immune system’ circulating, especially as cold-and-flu season approaches. Supplements are hailed as immune-system boosters, and tips are shared on immune-healthy foods that help the body fight off invaders. 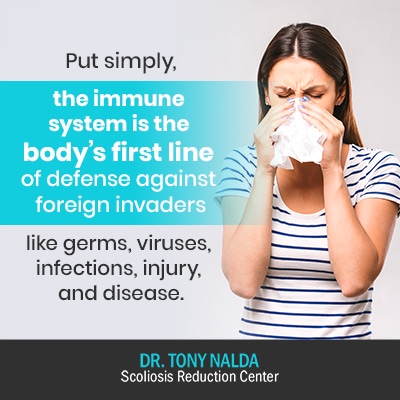 The immune system consists of a vast network of proteins, receptors, and cells. In addition, the immune system remembers every germ it’s battled and defeated so it can easily recognize, fight, and destroy it if it re-enters the body.

Now, in the context of scoliosis, a progressive spinal condition, it can seem like the condition and the body’s immune system would have little to do with one another; however, there are some causative links that are currently being explored, but it’s difficult to determine whether those connections are direct, or indirect.

As scoliosis is a structural condition, it’s not commonly associated with weakening a person’s immune system directly, but it’s also difficult to determine if a scoliotic curve is more commonly initiated in people with weaker immune systems, or if the development of scoliosis can impact immune response.

In addition, potential complications of scoliosis progression can impact a person’s immune system, but should these be considered directly related to scoliosis itself, or more of an indirect connection that develops as a result of the related complication?

Before we move on to the possible connections between scoliosis and the immune system, let’s talk about scoliosis in general terms.

As mentioned, scoliosis is progressive and incurable. When a person is diagnosed with idiopathic scoliosis, this means they have an abnormal sideways curvature of the spine, with rotation, and a Cobb angle of 10+ degrees, and there is no known cause.

Scoliosis is a 3-dimensional condition as the spine doesn’t just bend to the side, but also twists. As it’s progressive, it’s in the condition’s nature to worsen over time, especially if left untreated, meaning the curvature progresses in severity.

With a condition classified as ‘idiopathic’, and especially one as prevalent as scoliosis, a lot of study and research has been done in an attempt to determine the condition’s underlying cause.

The motivation behind gaining a better understanding of scoliosis etiology is that it could translate into potential preventative measures, as well as the possibility that understanding its causation could mean more effective treatment options.

In addition, the most common age group affected by scoliosis, adolescents, rarely find the condition painful, and in mild forms, the postural changes it introduces to the body can be very subtle and easy to miss, making early detection challenging.

This is why the majority of my patients here at the Scoliosis Reduction Center are in the moderate stage of progression, having progressed from mild to moderate, at which time the condition tends to become more noticeable.

Let’s now talk about the main ways in which scoliosis affects the body, and then connect it to the immune system.

How Scoliosis Generally Affects the Body

Especially for people recently diagnosed with idiopathic scoliosis, it’s natural to want to know exactly what to expect and how the condition can affect the body, including the immune system.

This can be a complex topic to discuss because every condition is as unique as the patient themselves. There is a wide range of condition severity from mild to moderate and severe to very severe.

The more severe a condition is, the larger the scoliotic curve is, and generally speaking, the more noticeable symptoms it will produce.

Most commonly, in AIS, the body is mainly affected in terms of posture and appearance. The telltale signs of scoliosis in adolescents are related to symmetry: the shoulders can become asymmetrical with one sitting higher than the other, one shoulder blade can protrude more than the other, uneven hips can develop, as can the presence of a rib arch, and/or a visibly-noticeable crooked spine.

These changes are related to the uneven forces that scoliosis introduces to the body, giving it an overall asymmetrical appearance that can cause clothing to not fit properly, hang unevenly, and can also cause changes in gait, balance, and coordination.

For adults, scoliosis can also cause varying levels of pain felt throughout the back, and even in other parts of the body due to compressed nerves.

While every person’s experience of scoliosis is different, once a condition progresses into the severe and very-severe stage, the condition does come with risk of certain complications such as lung impairment, digestive issues, headaches (some reaching migraine levels), sleep problems, and irregular menstrual cycles.

When it comes to the immune system, scoliosis isn’t commonly associated with weakening the immune system directly, but having the condition itself, and/or any of the aforementioned related complications, can increase stress levels and cortisol production within the body: known to weaken the immune system.

In addition, what is currently being explored is the role of immune response in scoliosis initiation and progression.

AIS is considered multifactorial, meaning it’s causation is thought to be the result of multiple factors, and there is no shortage of theories on the roles of different variables on the condition’s development.

From hormones, bone density, bone formation, body mass index, to the musculoskeletal system and neurological activity, there have been multiple links found between various systems within the body and scoliosis, but again, whether those links are direct, or indirect, can be difficult to determine.

As idiopathic scoliosis is also a common condition found in zebrafish, an interesting study explored the possible association between immune response and the development of idiopathic scoliosis, with the hope that it could have relevance in human studies.

As the researchers looked for a genetic cause behind the development of abnormal spinal curvatures in zebrafish, they were surprised to find that immune cells associated with inflammation seemed to accumulate at the curvature location.

When the body is facing an injury, infection, disease, or foreign invader, immunity cells travel to the site and induce an inflammatory response, so the findings of increased immune-cell activity at the curvature location in zebrafish suggests there could be an association between the immune system and the initiation and/or progression of idiopathic scoliosis.

The research team also found that by activating pro-inflammatory signals in the spinal cord, scoliosis could be induced in an otherwise healthy zebrafish. In addition, when those signals were blocked by medications with anti-inflammatory properties, both the incidence and severity of scoliosis was significantly lowered.

While the role of the immune response has to be more-comprehensively studied in humans with AIS, what the researchers of the zebrafish study are suggesting is that there is a link between neuroinflammatory signals, the immune system, and abnormal spinal curvature formation and/or progression.

The study also proposes that immunomodulating therapies could have potential as an effective means of managing idiopathic scoliosis.

Does Scoliosis Affect the Immune System?

So while a weakened immune system isn’t clearly identified as a direct complication of AIS, a number of the potential complications associated with scoliosis progression, as previously mentioned, plus the stress of living with an incurable spinal condition can increase the production of the body’s stress hormone: cortisol.

While bursts of cortisol can actually reduce inflammation, increased levels over time can lead to a weakened immune system. As scoliosis is progressive and incurable and can make life more challenging, related to increasing stress levels and cortisol production over time can have the cumulative effect of increasing inflammation and adversely affecting the immune response. 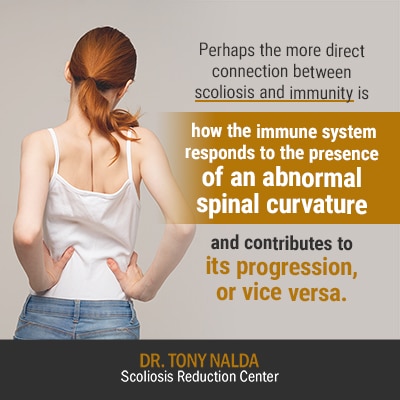 Perhaps the more direct connection between scoliosis and immunity is how the immune system responds to the presence of an abnormal spinal curvature and contributes to its progression, or vice versa.

Another study looked at the role of the immune system in AIS, and while definitive results are still forthcoming, the study suggests that immune cells could contribute to the development or progression of scoliotic curves by influencing muscle remodeling.

As we know that the spine relies on its surrounding muscles for support and stabilization, factors that affect muscle-tissue health can also impact overall spinal health, biomechanics, and its ability to maintain its natural curvatures. Based on this study, immune cells are thought to have a possible role in muscle inflammation, metabolism, and fibrosis in AIS.

Muscle-tissue injury could be a factor in initiating and progressing an abnormal spinal curvature, and future work will focus on how anti-inflammatory and anti-fibrotic therapies could help preserve muscle strength and delay and/or prevent the development of idiopathic scoliosis.

Ultimately, the role of skeletal-muscle inflammation in AIS causation is not fully understood; however, the role of immune cells in causing inflammation of the muscles that surround the spine could play a role in the initiation and progression of idiopathic scoliosis by impacting spinal support and stabilization.

So can scoliosis weaken your immune system, and how does it affect it? Clearly, this is a complex question with an equally-complex answer. As is the case with many scoliosis-related topics, additional research is needed before a more definitive answer can be given.

While a weakened immune system isn’t generally considered one of the common direct complications of scoliosis, the potential for the condition to increase stress levels and the production of cortisol over time is.

As continued increased levels of cortisol can lead to inflammation, this can weaken the immune system’s ability to recognize and fight off foreign invaders.

While the clarity of these links are still obscured by the mysterious and multifactorial nature of idiopathic scoliosis, the potential is there in terms of connecting the cells of the immune system to inflammation and muscle-tissue health: both factors in the presence and progression of scoliotic curves.