How to Test for Scoliosis

When it comes to scoliosis, early detection is important and increases the chances of successful treatment. While there are tests and visual assessments that can be done to screen for indicators of the condition, when it comes to testing for scoliosis and reaching an official diagnosis, the scoliosis X-ray and Cobb angle measurement remain the gold standard.

Before we delve into the ways scoliosis specialists test for scoliosis and reach an official diagnosis, let’s first explore why early diagnosis can be a challenge and the impact it can have on treatment success.

Scoliosis is a progressive condition with no known cure. What this means is that the condition will get worse over time, at varying rates. Some will progress rapidly, while others slowly. A number of factors can affect likely rates of progression: condition severity, age, location of the curvature, and condition cause.

While there are certain triggers for progression and patterns that we can find, such as growth, there’s no generalized method for determining how fast a patient’s condition will progress. What we do know is that no abnormal curvature will simply correct itself and that, at some point, every condition is likely to worsen.

The sooner a patient is diagnosed and starts treatment, the better. Scoliosis can be classed as mild, moderate, or severe. If a patient comes to me for treatment when their curve is at 15 degrees, rather than after it’s progressed to 25 degrees, we have less work to do to reduce the curve. 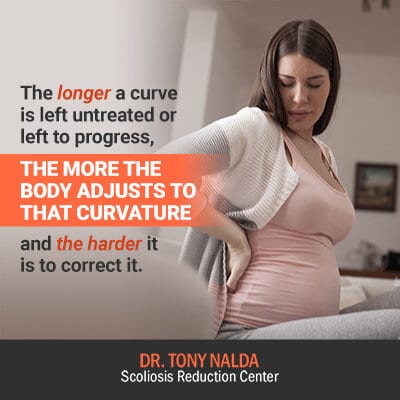 For milder conditions, or conditions that are in the early stages of progression, the treatment plan can be less intense. The body can adjust to a number of structural changes, including an abnormal spinal curvature. The longer a curve is left untreated or left to progress, the more the body adjusts to that curvature and the harder it is to correct it.

That being said, it’s never too late to start treatment. Many people live with scoliosis for years without knowing it, and when their symptoms become more obvious, that’s when they get a diagnosis and start treatment.

Here at the Scoliosis Reduction Center, I’ve treated every form and severity level of scoliosis, and positive results are always possible through our functional and proactive approach.

Now that we’ve explored the benefits of early diagnosis, let’s move on to some of the ways scoliosis specialists, and even parents and caregivers, can screen for indicators of the condition.

When a patient comes to me with concerns that they have scoliosis, the first step is to conduct a physical exam and visual assessment. We discuss medical history and if anyone else in the family has scoliosis.

As a scoliosis specialist, I can tell a lot just by looking at a patient and the way they walk. I look for body asymmetries, shoulders that aren’t even, rib humps, limb length discrepancies, and other postural changes associated with scoliosis.

The Adam’s forward bend test is a great method for screening for indicators of scoliosis and is often used in schools. An Adam’s test doesn’t provide all the information we need for an official scoliosis diagnosis, but it does show a need for further testing and can detect structural and functional scoliosis.

The postural changes that occur can range from subtle to extreme, and the condition is rarely painful, which means that adolescents often don’t realize there’s anything wrong.

The Adam’s forward bend test can easily be done at home and can be done with or without the use of a Scoliometer.

When performing the Adam’s forward bend test on a patient, the patient is first asked to remove their shirt so the spine is fully visible. Then they are asked to stand and bend forward with their hands together and their arms hanging down in front of them.

The patient bends from the waist, at 90 degrees, until their back is in the horizontal plane. The feet are kept together. The examiner stands or sits behind the patient to examine their spine in the forward-bend position.

In this position, the bony vertebrae of the spine are protruding and are more pronounced. It’s easier to see the curvature of the spine and spot if there is any increased or decreased kyphosis or lordosis (outward and inward curves of the spine) and if there are any asymmetries of the shoulders, hips, or scapula. Additional asymmetries to look for is a head that doesn’t line up with the pelvis or the characteristic rib hump.

The Adam’s test is an effective, simple, and noninvasive screening method for scoliosis. This is why it’s the go-to method for screening in schools and is recommended for caregivers and parents who want to determine if their child or adolescent has indicators of scoliosis.

When combined with a Scoliometer, the Adam’s forward bend test is even more informative.

As the Adam’s test can reveal the presence of abnormal curves in the spine, plus trunk asymmetries, when combined with an instrument known as a ‘scoliometer’, we can extrapolate more information: estimate the degree of curvature and the angle of trunk rotation (ATR).

A scoliometer basically looks like the combination of a level and a ruler. You have a small ruler with a bubble and a notched out portion that’s placed over the spine. When the scoliometer is positioned across the back at the peak of the curve and is traced along the path of the spine, where the bubble lines up indicates the tilt of the spine in degrees.

The scoliometer is an effective screening tool and can also be used for follow-up to monitor a curve’s progression.

With the importance of early detection in mind, you can see how beneficial a test like this can be. Not only can parents and caregivers perform this test easily from home, the addition of a scoliometer makes it more informative. There are even apps you can get for mobile devices to be used as scoliometers.

Once an Adam’s test is performed and indicates the presence of an abnormal curvature and any trunk asymmetries, the patient is then sent for X-rays that can give an official scoliosis diagnosis through a measurement known as the ‘Cobb angle’.

Contrary to what many people think, scoliosis isn’t just having an abnormally curved spine; that curvature also has to coincide with rotation to be considered scoliotic.

This is why you may have heard scoliosis described as a 3-dimensional condition. It doesn’t just curve to the side, it rotates and includes all three planes of the spine: sagittal, coronal, and transverse.

For a scoliosis diagnosis to be given, the patient’s curvature has to include rotation and be measured at 10 degrees or more.

Then two additional lines are drawn at a 90-degree angle, perpendicularly, to the first lines. Where those lines intersect, the angle is measured, and that number is the Cobb angle expressed in degrees.

The Cobb angle helps diagnose scoliosis and also further classifies it on the condition’s severity scale as mild, moderate, or severe:

In addition to helping us diagnose scoliosis, the information that a scoliosis X-ray provides also helps determine how best to treat it. 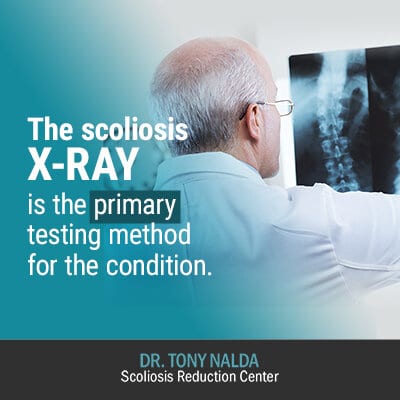 The scoliosis X-ray is the primary testing method for the condition. Not only does it tell us the patient’s Cobb angle and place it on the condition’s severity scale, it also tells us where along the spine the curvature is located.

The X-ray results aren’t just important in diagnostic terms, but also in informing our treatment approach moving forward. The information provided by the scoliosis X-ray becomes our map for treatment. It tells us how severe a patient’s condition is, how hard we’ll have to work to correct their curvature, and where the efforts of our scoliosis-specific chiropractic adjustments should be concentrated.

Moving through treatment, X-rays will continue to be a crucial tool for monitoring the patient’s rate of progression and the effectiveness of treatment.

As the leading cause of spinal deformity amongst school-aged children in the United States, scoliosis is more common than many people think. The largest age group diagnosed with the condition are adolescents between the ages of 10 and 18.

As a progressive condition, it’s the nature of scoliosis to worsen over time. The longer an abnormal spinal curvature is left untreated, the more the body adjusts to that curvature, and the harder it is to reduce.

While it’s never too late to start treatment, when caught early on, patients have higher chances of successful treatment results: reducing the curvature, restoring as much of the spine’s healthy curves as possible, and improving the spine’s overall biomechanics.

With an effective and simple screening test, such as the Adam’s forward bend test, even parents and caregivers can screen for indicators of the condition from home. This is a great way to be proactive with your adolescents, especially if there’s a family history or if you’re noticing the appearance of body asymmetries.

When a patient’s curvature is measured at more than 10 degrees and coincides with rotation, a scoliosis diagnosis is given. Through the scoliosis X-ray and Cobb angle measurement, I can find all the information I need to develop a customized treatment plan moving forward.

Here at the Scoliosis Reduction Center, through our scoliosis-specific chiropractic approach, our patients can experience results in as little as two weeks. With each and every patient, we work towards improving the lives of people with the condition and giving them the tools to do so.