Scoliosis During Puberty: What Parents Should Watch Out For

Scoliosis ranges widely in severity from mild to moderate and severe to very severe. As a progressive condition, there are many benefits associated with early detection and proactive treatment, but first, scoliosis needs to be diagnosed, and knowing the signs and symptoms to watch out for is step one.

There are many benefits associated with early detection when it’s responded to with proactive treatment. Growth and development trigger progression, so parents of adolescents should watch out for the condition’s early telltale signs: postural deviation.

Before getting to the specifics of the condition’s early signs and symptoms to watch out for, let’s talk generally about the condition.

Being Diagnosed with Scoliosis

The first step to receiving proactive treatment is detecting and diagnosing the condition, so let’s talk about the parameters that have to be met to reach a diagnosis of scoliosis.

Scoliosis involves the development of an unnatural sideways spinal curve, with rotation and a minimum Cobb angle measurement of 10 degrees.

The spine’s natural curves make it stronger, more flexible, and better able to absorb stress, like a coiled spring. When the spine loses one or more of its natural and healthy curves, the biomechanics of the entire spine is disrupted.

It’s the rotational component that makes scoliosis a 3-dimensional condition as the spine doesn’t just bend unnaturally to the side but also twists from front to back, back to front.

Part of the diagnostic process involves comprehensively assessing the condition so it can be further classified based on key patient/condition variables: patient age, condition type, curvature location, and condition severity.

A patient’s Cobb angle determines condition severity: a measurement that is taken during X-ray that tells me how far out of alignment a scoliotic spine is.

The higher the Cobb angle, the more tilted the vertebrae in the curve are, and the more misaligned the spine is:

When it comes to condition type, we’re talking about different causative sources, and the most prevalent type of scoliosis is adolescent idiopathic scoliosis (AIS), diagnosed between the ages of 10 and 18. 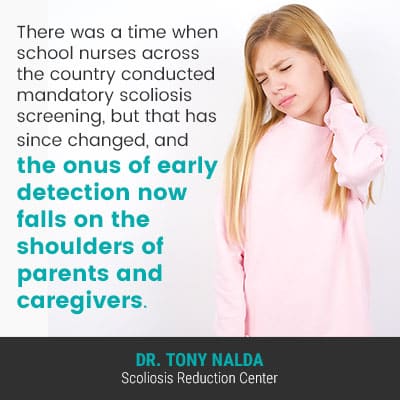 The majority of known scoliosis cases are idiopathic, approximately 80 percent and the remaining 20 percent are associated with clear causative sources: neuromuscular, congenital, degenerative, and traumatic scoliosis.

So when it comes to parents and caregivers of adolescents, puberty is the time to really start watching out for signs of the condition.

There was a time when school nurses across the country conducted mandatory scoliosis screening, but that has since changed, and the onus of early detection now falls on the shoulders of parents and caregivers.

This leads us to a key feature of scoliosis in general, particularly when it comes to the treatment of adolescent idiopathic scoliosis: the condition’s progressive nature.

Scoliosis is a structural and progressive spinal condition, meaning it’s in its very nature to worsen over time, especially if left untreated or not treated proactively.

As a progressive condition, where scoliosis is at the time of diagnosis is not indicative of where it will stay; even a case of mild adolescent idiopathic scoliosis can easily progress to moderate, severe, or very severe.

AIS is diagnosed between the ages of 10 and 18, so these patients are in, or are entering into, the stage of puberty with rapid and unpredictable growth spurts.

As growth is the condition’s main trigger for progression, this age groups is at risk for rapid-phase progression. So, an important focus of treatment in AIS is working towards counteracting the condition’s progressive nature with a curvature reduction or successfully holding a patient’s scoliosis where it is throughout growth.

Now, it might seem difficult to imagine that a young person’s scoliosis could be difficult to detect, but this is the case in many instances.

In mild cases, many of the condition’s early signs are too subtle for anyone other than an expert, to notice, and mild forms don’t often cause noticeable functional deficits.

In addition, while pain is the number-one scoliosis symptom in adults, children and adolescents don’t generally find the condition painful. While no one wants to experience pain, it does serve a vital purpose: it tells us something is not right inside the body.

So for adolescents who don’t find their conditions painful, this is another challenge to reaching early detection.

For parents and caregivers of adolescents, what are the condition’s early signs and symptoms to watch out for?

What are the Symptoms of Adolescent Idiopathic Scoliosis? 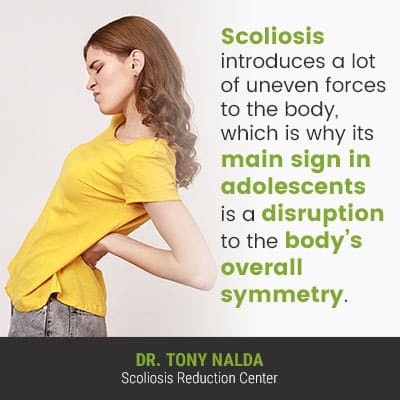 From the wide range of Cobb angle measurements, it’s clear how much scoliosis can vary from one patient to the next, and this includes related symptoms; what one person might experience is not indicative of what others will.

The classification points mentioned earlier (patient age, condition type, curvature location, and condition severity) all shape a person’s experience of life with the condition, just as they inform the crafting of effective treatment plans.

When it comes to adolescent idiopathic scoliosis, some of the condition’s earliest symptoms and telltale signs include:

Scoliosis introduces a lot of uneven forces to the body, which is why its main sign in adolescents is a disruption to the body’s overall symmetry.

In addition, ill-fitting clothing and changes to gait, balance, and coordination also fall into the category of what parents should watch out for.

While having one or two bodily asymmetries doesn't guarantee a person has scoliosis, it can indicate the need for further testing and considering the benefits associated with early detection. It’s better to be overly cautious with screening than to assume the condition will be easily noticeable.

So what are the benefits of early detection?

While there are no treatment guarantees, there are a number of benefits associated with early detection, especially when it comes to AIS, as this age group is at risk for rapid-phase progression.

When a condition is caught early in its progressive line, there are fewer limits to what we can achieve.

Scoliosis is simpler to treat when it’s at its mildest, before significant progression has occurred, making the spine more rigid, and less responsive to treatment, and before the body has had ample time to adjust to the unnatural spinal curve.

While an adolescent recently diagnosed with mild scoliosis might be feeling anything but lucky, the fact that the condition was detected and diagnosed early in its progressive line increases the chances of treatment success.

While I can never guarantee treatment results, if early detection is responded to with proactive treatment, progression, increasing condition severity, escalating symptoms, and the need for more invasive treatment in the future can be prevented.

Here at the Scoliosis Reduction Center, I use a conservative chiropractic-centered treatment approach that values proactive treatment started as close to the time of diagnosis as possible.

When it comes to scoliosis during puberty and what parents should watch out for, we’re talking about being able to recognize the early indicators of scoliosis.

Due to the uneven forces introduced by the condition, the earliest signs of adolescent idiopathic scoliosis involve postural deviation that disrupts the body’s overall symmetry.

As a result of postural deviation, changes to gait, balance, coordination, and how clothing fits are additional signs that indicate the need for further testing.

The big risk facing adolescents with scoliosis is related to progression because the condition’s main progressive trigger is growth and development, which characterizes the stage of puberty: rapid and unpredictable growth spurts.

While there are never treatment guarantees, adolescents whose conditions are diagnosed early, if responded to with proactive treatment, are more likely to achieve a curvature reduction, and increased core strength, so the spine is optimally supported by its surrounding muscles and a home-rehabilitation program that further stabilizes the spine for long-term sustainable results.