How Many People Have Scoliosis? How Common Is Scoliosis?

Scoliosis is a spinal condition that can affect any age. It develops irrespective of gender, race, geography, or socioeconomic factors. While most people understand, on a basic level, that scoliosis involves having an abnormally-curved spine, it still remains a fairly mysterious condition.

When it comes to how many people have scoliosis, the condition is far more prevalent than many realize. According to the National Scoliosis Foundation, there are currently close to seven million people living with scoliosis in the United States alone, and it’s important to remember that estimates only include ‘known’ diagnosed cases.

To start our discussion of how many people have scoliosis and explore its prevalence, let’s first define the condition and its most common forms.

There are a lot of misconceptions out there regarding the condition, so let’s get right to the facts about scoliosis.

Having scoliosis doesn’t just mean having a crooked spine; it means having a spine that is curved abnormally to the side, but it also rotates. What many people don’t realize is that scoliosis is a 3-dimensional condition, and it needs to be treated as such.

Cases also range significantly, which is why it’s so important that an effective treatment plan is customized to address the characteristics of each patient and their individual condition.

When scoliosis is diagnosed, it’s further classified as mild, moderate, severe, or very severe. This is done through what’s known as ‘Cobb angle’, and this is a measurement taken via X-ray that involves drawing intersecting lines from the tops and bottoms of the most-tilted vertebrae (bones of the spine) of the curvature; the resulting angle is measured in degrees and places the condition on its severity scale. 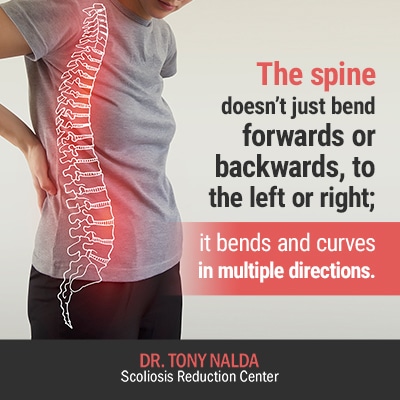 In order for a person to be diagnosed with scoliosis, they have to have a minimum Cobb angle measurement of 10 degrees, and the curvature must also include rotation; this is considered a true structural scoliosis.

Even within one of the above severity levels, there can be a large variance, with one patient experiencing a certain rate of progression and certain symptoms, and the next patient reporting a completely different experience of life with their condition.

The largest curvature I have seen is 150 degrees, so imagine the difference between a condition that’s diagnosed at 10 degrees and another that’s over 100. This large variance is part of the reason scoliosis is often described as ‘complex’.

Another reason scoliosis is considered complex is because as a progression condition, it’s going to get worse over time, if left untreated. There also is no 100-percent effective way to clearly predict how fast, or slow, a patient’s condition is going to progress.

While scoliosis has been around for hundreds of years, we still don’t fully understand its etiology: yet but another reason scoliosis is considered both complex and mysterious.

Unfortunately, the causes of scoliosis are not very well understood, but experts have identified the following known causes:

When we are talking about how common scoliosis is, it’s important to talk about the different forms, and in scoliosis cases with the aforementioned known causes, these are atypical forms that only account for 20 percent of known diagnosed cases.

To get a more accurate understanding of how common a spinal condition scoliosis is, we also need to address the fact that the majority of scoliosis cases are ‘idiopathic’.

Idiopathic means that, despite years of research and studies done to better understand the condition’s etiology and possible prevention, a clear single-known cause has not been identified. This has led experts to the general consensus that idiopathic scoliosis is, instead, multifactorial, meaning its onset is attributed to a host of factors and how those factors interact. 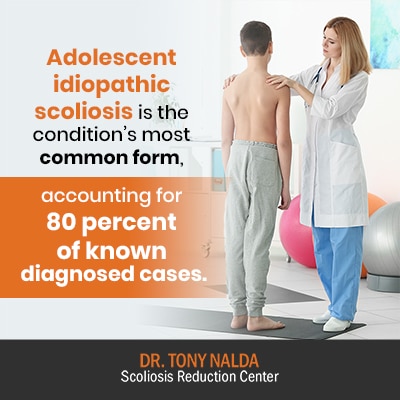 Adolescent idiopathic scoliosis (AIS) is the condition’s most common form, accounting for 80 percent of known diagnosed cases. This form is diagnosed in individuals between the ages of 10 and 18.

While scoliosis is far more commonly diagnosed in children and adolescents, adults can develop it too. Studies exploring scoliosis in adults support rates of between 12 and 20 percent, and one study exploring the prevalence of the condition in people over 60 years found it in 68 percent; the rate of scoliosis actually increases with age.

The two main forms affecting adults are idiopathic and degenerative. When adults present with idiopathic scoliosis, these are cases of AIS that progressed into maturity, when they likely started producing noticeable symptoms that led to a diagnosis.

In degenerative scoliosis, the condition develops because as a spine faces degenerative changes, commonly due to aging and/or the cumulation of certain lifestyle choices, its ability to support its natural and healthy curvatures is compromised.

Degenerative scoliosis is also known as ‘de novo’ scoliosis, meaning the condition has developed fresh in adulthood, with no prior history of the condition in adolescence.

Now that we have touched on the different types of the condition that can develop and how it affects different ages, we can move on to some numbers and stats that show how prevalent scoliosis is.

Scoliosis is a lot more common than many people think. Consider these following facts:

These numbers are, of course, even more surprising when you consider that these only include ‘known’ diagnosed cases, and just cases in the United States.

Clearly, if we were to add cases from around the world, plus somehow estimate the number of people living with the condition unaware, those numbers would increase exponentially.

While some of you might be wondering just how a person with scoliosis could go through life without knowing they have the condition, it’s easier than you might think. As I mentioned earlier, there is a huge range in the condition’s severity, and in mild forms, it can be very difficult for an average person, who is not trained in the condition’s subtle signs, to recognize its indicators.

Mild forms of scoliosis also rarely produce functional deficits, and the postural changes the condition is known for can also be very subtle in the condition’s early days.

Generally, as a condition progresses, its symptoms become more noticeable, which is why the majority of my patients are in the moderate stage of progression as their mild condition has progressed and started producing overt symptoms.

In addition, the condition’s most prevalent form (AIS) is not painful, and without that big signifier that something is wrong, early detection can be a challenge.

Most of you have likely known someone with scoliosis, or will at some point. As the leading spinal condition amongst school-aged children, scoliosis most commonly develops in children and adolescents, but adults can develop it too.

Scoliosis can affect people of any age, gender, race, and from all sectors of the socioeconomic spectrum. With close to seven million people currently living with scoliosis in the United States alone, when you factor in estimates of people living with the condition unaware, plus diagnosed cases from around the world, the number would be even more surprising.

Here at the Scoliosis Reduction Center, we have diagnosed and treated all forms of the condition, and we are here to answer any questions, or provide any guidance you might need.