How Does Scoliosis Affect the Digestive System?

The spinal cord is a vital part of human anatomy that’s connected to virtually every system within the body. Its primary function is to relay messages to and from the brain, coordinate reflexes, and provide the body with structural support. When a person’s spinal cord is compromised due to scoliosis, its ability to carry messages from the brain to the rest of the body can be impaired, affecting muscles and organs essential to digestion.

The Role of the Spinal Cord

The spinal cord works in tandem with the brain. To better understand this, you can picture the spinal cord as a telephone operator that facilitates connections and communication throughout the body.

The spinal cord helps the brain talk to various parts of the body and helps those parts communicate with the spinal cord. The spine relays messages from the brain to different muscles in the body to facilitate movement.

The spinal cord passes along messages from sensory receptors to the brain which sends response messages back to the relevant areas of the body.

The spinal cord also has the important task of responding to outside stimuli by coordinating reflexes that aren’t routed through the brain; the spinal cord alone manages these reflex responses.

In addition to the spine’s telephone-operator role of relaying important messages back and forth between the brain, spinal cord, and the rest of the body, the spine acts as the body’s main support structure. It keeps bodies upright and straight and connects the skeleton’s various parts to one another, such as the head, chest, pelvis, shoulders, arms, and legs.

How the Spine Changes with Scoliosis

When a person develops scoliosis, their spine is undergoing a progressive structural change in the form of an abnormal spinal curvature. When it comes to scoliosis, there are a lot of uneven forces at work. 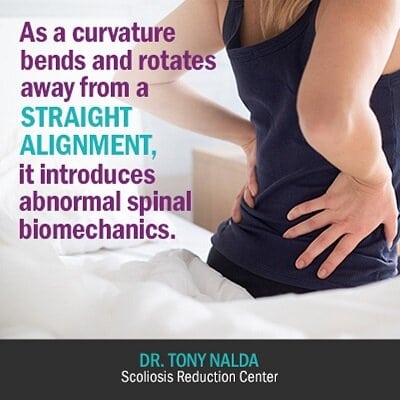 As a curvature bends and rotates away from a straight alignment, it introduces abnormal spinal biomechanics.

There are a total of five healthy curves to the spinal cord, and these curves give the spine its strength and flexibility.

While scoliosis is most commonly found in the spine’s middle and lower portion, it can develop at different points along the spine: cervical, thoracic, lumbar, sacral and coccyx.

Keeping in mind how each region of the spinal cord connects to multiple other areas and parts of the body, you can see how a deformity of the spine can be felt in areas outside of the spine.

How Does Scoliosis Affect The Digestive System

When an abnormal spinal curvature is introduced, abnormal spinal biomechanics develops. As the spine loses its good curves, the body attempts to compensate by introducing bad curves.

When there are unequal forces at work on the spinal cord, the body naturally twists and turns to restabilize itself; this tendency can affect multiple systems within the body and not just the spine and its adjacent muscles.

The digestive system refers to a group of organs that work together to convert whole foods into energy and nutrients that nourish the body; this allows it to function, grow, and repair itself as needed. The long tube in the body through which food passes is called the gastrointestinal tract (GI tract). 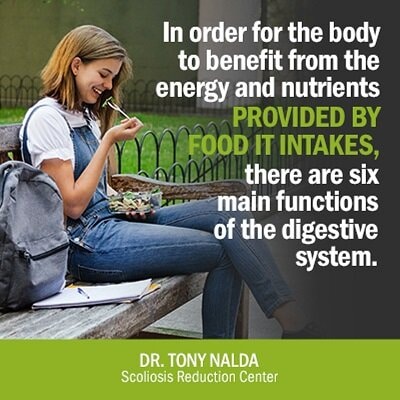 In order for the body to benefit from the energy and nutrients provided by the food that enters it, there are six main functions of the digestive system:

Scoliosis and the Digestive System

As the digestive system is made up of a group of organs that facilitate the body’s ability to use the essential nutrients and energy that food provides, any condition affecting these organs can impair digestion and bowel function.

While it might initially seem like a stretch to say that a spinal deformity can affect the digestive system, if you think back to that analogy of the spine acting as a telephone operator relaying messages throughout the body, the connection becomes clearer.

The spinal cord carries messages from the brain to the body’s peripheral nerves; these nerves control muscles and internal organs, some of which play important roles in digestion.

If a spine is abnormally curved, that path of communication becomes skewed and can impair the flow of information between the brain and the body’s muscles and organs.

Postural changes, such as a prominent lean to one side, that can occur with moderate-to-severe scoliosis can also cause compression and contortion of the muscles, stomach, and organs.

Are you experiencing diegstive issues or other scoliosis symptoms? Click here to contact us to learn more about our conservative approach to scoliosis treatment.

If scoliosis is left untreated and allowed to progress unimpeded, scoliosis patients can experience the following symptoms:

Scoliosis is a complex condition that takes many forms and varies from mild to severe. Its symptoms will differ depending upon a number of variables including age, cause, degree of curvature, and its location along the spine.

The spine acts as a highway for the body’s central nervous system, so any condition that affects the spine has the potential to affect other parts of the body, including the pancreas, kidneys, bladder, and intestines.

If the body is leaning unnaturally to one side, as it can with scoliosis, the resultant contortion and compression can also impair the body’s ability to digest food normally. Depending on the location and degree of the spinal curvature, the passage of food through the intestines can become blocked, causing constipation.

Every case of scoliosis is different, and in my years of treating patients and their condition here at the Scoliosis Reduction Center, I’ve never repeated a treatment plan. Just as every case is different, the symptoms a patient is likely to experience can also differ greatly.

As the spine’s healthy curves facilitate its strength and flexibility, losing those good curves can result in the body responding by introducing bad curves. As the spine is the primary means by which the brain communicates with the rest of the body and the rest of the body communicates with the brain, spinal disorders can cause a whole host of unexpected symptoms and issues, including impairing the digestive tract and bowel function.

As the means by which the body turns food into essential nutrients and energy, the digestive system plays a leading role in the body’s overall functionality. The postural changes that can occur in scoliosis can cause the body to have an unnatural lean to one side, and this can result in the contortion of muscles, the stomach, and organs involved in digestion.

Spinal curvatures can also impair the body’s ability to relay messages from the brain to peripheral nerves throughout the body via the spinal cord. The peripheral nerves control muscles and organs, so you can see how this can affect the digestive system in multiple ways. Additional digestive issues that can be caused by scoliosis are acid reflux, heartburn, stomach pains, constipation, and IBS.

The best approach to handling scoliosis-related symptoms, such as digestive issues, is to manage the condition’s progression through a proactive scoliosis-specific chiropractic approach. Here at the Scoliosis Reduction Center, our approach has proven results. Click here to contact us and to learn more about our proactive and conservative approach to scoliosis treatment.