What Causes Scoliosis to Worsen?

As a progressie condition, the nature of scoliosis is to worsen over time. Although we’ve been able to pinpoint some triggers for and patterns of progression, in most idiopathic cases, we still don’t fully understand the reasoning behind the progression’s cause and rate.

Understanding the Idiopathic Nature of Scoliosis

One of the most common questions regarding scoliosis is what causes it to develop in the first place and, by extension, what causes it to get worse. Despite the amount of studies and research done to find those answers, we’re still unclear on a number of factors.

While there are different forms of scoliosis, 80 percent of diagnosed cases have no known cause and are classed as ‘idiopathic’. This form of the condition is unpredictable as we don’t know what caused it to develop in the first place. That being said, we do know certain triggers and patterns that seem to accompany a patient’s progression.

For the other 20 percent of diagnosed cases with known causes, they fall into one of four classifications: neuromuscular, congenital, traumatic, and degenerative. In these cases, we know the scoliosis has developed and will progress due to the following reasons: as a secondary complication of a more serious neuromuscular disease, because a vertebra was malformed at birth, damage to the spine from an accident, or because the intervertebral discs have worn out causing the spine to slip out of alignment.

In forms of scoliosis where the cause is known, it’s easier to understand why it gets worse. In the bulk of scoliosis cases classed as idiopathic, this isn’t so clear, and the focus becomes observing triggers for and patterns of progression.

As a scoliosis specialist, one of the questions I’m asked the most is, “Will my scoliosis get worse?” These are difficult moments as I have to explain that there isn’t a definitive answer to this question. What I most often say is, “At some point, it’s most likely that  your scoliosis will get worse, but how much worse, or at what rate, is not something that can be predicted.” 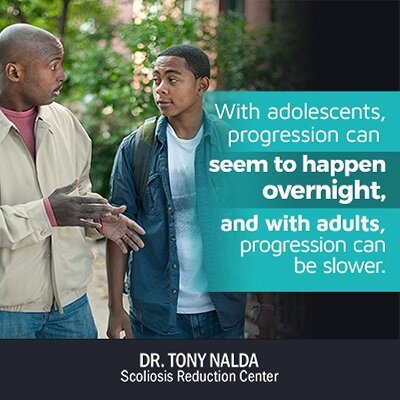 With adolescents, progression can seem to happen overnight, and with adults, progression can be slower. Although many aspects of scoliosis are mystifying, there are some facts we know about it, and this helps patients understand the vagueness of my answer.

To better understand the factors that affect progression, let’s take a look at what we do know.

One thing we know is that growth is the number one risk factor for rapid progression. As the largest age group diagnosed with scoliosis is between the ages of 10 and 18, you can see how important this trigger is in managing the condition’s progression.

Obviously, we can’t stop someone from growing, but when it comes to treating cases of adolescent idiopathic scoliosis, we know that someone who has a lot of growing to do is at the highest risk of their condition getting worse.

What this trigger tells us is that during times of accelerated growth spurts, a patient’s condition has to be monitored extra closely so that efforts can be made to counteract this tendency. The problem with this is something you can likely guess: not everyone grows at the same rate.

Typically, this period of accelerated growth starts at around 11 years old for girls and 13 years old for boys. Although we know this tends to be the pinnacle of growth, puberty is a phase that’s not exact and varies from one individual to the next.

Progression triggered by growth most often ends when skeletal maturity is reached.

While young to middle-aged adults with scoliosis still have to worry about progression, it tends to occur at a much slower rate than in children who are growing. This slower rate of progression is due to gravity and can lead to compression and pain.

As the progression in this age group tends to be slower, it’s also less noticeable. Even if a person’s curvature is progressing one degree a year, that wouldn’t produce a noticeable difference, but cumulatively, it adds up.

Specifically with adults, as a curve progresses, it’s more likely that their curve will continue to get worse, especially if left untreated.

The later the stage of life a person with scoliosis is in, the faster their progression is likely to be. As people age with scoliosis, the curvature to their spine can lead to asymmetrical degenerative spinal changes.

Increased rates of progression are common in adults over the age of 40 and 50, and after 60, progression can really speed up.

Menopause can Speed up Progression

Women with scoliosis have the added element of menopause to contend with as it’s thought to lead to increased rates of progression.

It’s been observed that during and after menopause, curvatures tend to increase; this is understood as a result of the bone mineral loss that accompanies the menopausal stage.

No One Knows How Much a Curvature will Progress 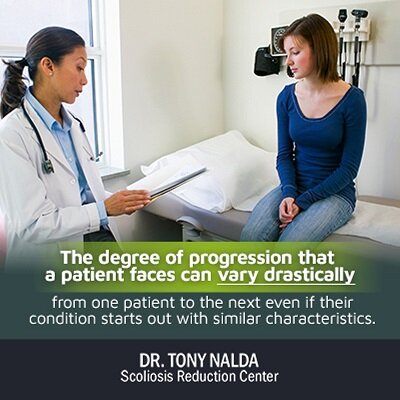 This last fact is the most difficult one to accept. The degree of progression that a patient faces will vary drastically from one patient to the next, even if their condition starts out with similar characteristics.

For example, two children of the same age can receive a scoliosis diagnosis at the same time. They can both start out with a 10-degree curve, but one can progress to 60 degrees, while the other only progresses to 25.

That variance and unpredictability is the same for adult patients; one patient's condition can progress rapidly and another’s glacially.

This is what makes the condition challenging to treat because there is no one-size-fits-all treatment solution. It’s this challenging aspect of the condition that inspired me to open the Scoliosis Reduction Center. Here, our patients have access to multiple forms of treatment in one accessible location.

The diversity of treatment approaches that we can offer address the variance of the condition as each patient’s symptoms and experience of living with scoliosis is unique.

While the traditional approach might suggest that watching and waiting to see if the condition progresses on its own and at what rate is a good choice, that puts patients at risk in a number of ways.

If we’re talking about children and adolescents who are constantly growing or about to enter into an accelerated-growth period, they are facing the biggest risk of rapid progression. If observation is the treatment choice and a growth spurt hits, that curvature is allowed to progress unimpeded.

As the spine loses its healthy curves, the body responds by putting in bad curves, and this cycle can only be interrupted by a functional and proactive treatment approach that actually reduces the abnormal spinal curvature.

Scoliosis is known to have both periods of rapid and slow progression. The common understanding that’s emerged over the years is that in the vast majority of cases, progression at some level is likely to occur.

With children and adolescents who are at the highest risk of rapid progression, the treatment focus is on reducing the curvature as much as possible to counteract the effects of growth. In adults, as growth isn’t such a factor, progression tends to be slower; our focus then shifts to returning their curvature to where it was before it started to cause them pain and discomfort.

Our proactive and functional chiropractic-treatment approach here at the Scoliosis Reduction Center sees dramatic results: 98 percent of our patients experience improvement after just two weeks. We encourage our patients to engage with their treatment plan to ensure it’s effective, sustainable, and customized to their individual condition.