How Bad Can Scoliosis Get?

No two cases of scoliosis are exactly alike. The condition varies based on multiple factors: type of curve, location of curve, severity of curve, and age of patient. The patient’s Cobb angle measurement, taken via X-ray, places each condition on a scale that ranges from mild, to moderate, and severe.

A spinal deformity is considered scoliosis when there’s an abnormal sideways curvature to the spine that coincides with spinal rotation; the curvature also has to be measured at more than 10 degrees. Let’s start our discussion on how bad scoliosis can get by explaining the likeliest time a person’s scoliosis is going to get worse, known as ‘progression’.

As a progressive condition, the nature of scoliosis is to worsen over time. While no one, doctor or otherwise, can tell how slowly or fast a condition will get worse, there are known triggers of progression associated with growth and development.

The largest curve I’ve seen has been 155 degrees, and the most common time a curve progresses is in the adolescent stage, generally somewhere between the ages of 10 and 16.

In addition to the puberty stage, there are other times that scoliosis can get really bad and progress quickly, and that’s in older stages of life. For females, this is at the age of menopause and beyond; for males, this is post 60, 65 and beyond.

Curves that are present later in life can progress rapidly as well; this is because the curve has likely been there for a long time or has developed through some hormonal changes related to menopause. 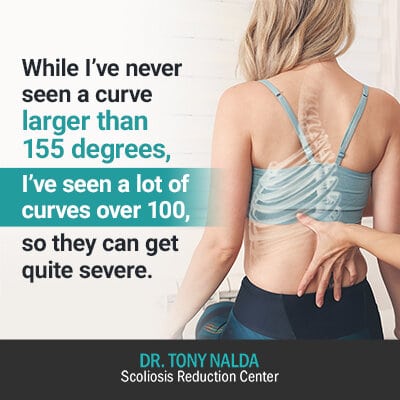 When it comes to how bad a curvature can progress to and where it will stop, we don’t know. While I’ve never seen a curve larger than 155 degrees, I’ve seen a lot of curves over 100, so they can get quite severe.

Once a patient has scoliosis, they have it for life. The important issue then becomes determining the best course of treatment for limiting how bad scoliosis can get by managing its progression effectively.

If you’ve read my book, Scoliosis Hope, you know this is where I get very passionate about scoliosis treatment. There are two main approaches to treating scoliosis: conservative and traditional.

Here at the Scoliosis Reduction Center, our approach is to conservatively treat our patients with a natural and noninvasive form of treatment.

The fastest rate of progression I’ve seen in an adolescent who was untreated was 10 degrees a month. For a curve to increase by 60 degrees in 6 months, it’s pretty extreme. This speed of progression is why it’s so important to start treatment as soon as possible to catch that curve before it gets worse.

Our approach is to start treatment as close to the time of diagnosis as possible. Through a series of chiropractic adjustments, and other forms of treatment such as corrective bracing, exercise, therapy, and rehabilitation, we customize each treatment plan to suit the patient’s individual condition. 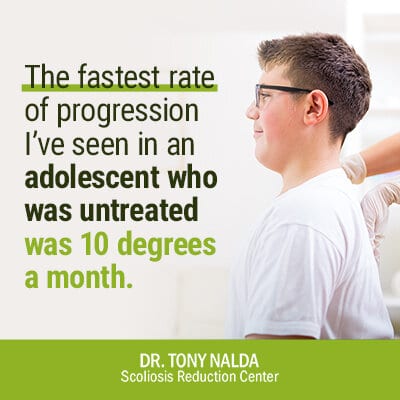 We work closely with our patients to increase spinal strength and flexibility, while restoring as much of the spine’s healthy curves as possible. As a progressive condition that’s known to worsen over time, it only makes sense to try and stay ahead of the curve to effectively manage its progression.

A big part of the traditional treatment approach is to watch and wait; this would involve  scenarios where patients with small curves are told that they’re not yet in need of treatment.

I think it’s very dangerous for a doctor following the traditional approach to say, “Since your curve is relatively minor at 20 degrees, come back in 6 months to a year and we’ll see how you’re doing.” To me, this is the most horrible medical advice an adolescent patient with scoliosis can be given, and I’ll tell you why.

For parents, if your child has scoliosis, they should minimally be checked for growth every month because if your child is growing, so too is the likelihood that their curvature will progress alongside that growth and development. I would also suggest looking for rib deformities as this is a common sign of thoracic scoliosis.

A patient’s treatment should never solely be based on random time intervals because you can walk out of your doctor’s office one day and start a growth spurt the next. If you’re not going back to see that doctor for 6 months, or worse, a year, you’re going to lose a lot of valuable time that could have been spent working to prevent that curve from getting worse.

When to Start Treatment

As you know by now, scoliosis can progress at wildly different rates and become severe quickly during times of growth and development. This is why I believe so strongly in the merits of our proactive approach.

I recommend treating scoliosis curves at any size, whether it be 15, 20, 25, 30 and so on. I don’t believe in waiting for a condition to become severe enough to treat, as the traditional orthopedic approach would.

There’s never any harm in reducing a small curve to smaller, but there’s a lot of harm to wasting valuable treatment time while a curve gets worse.

When I diagnose a patient with scoliosis, there are a lot of common questions I’m asked. The first one is usually, “How bad can scoliosis get?” This is always tricky to answer because every single patient has their own scoliosis story, including how much, and at what pace, their condition progresses.

I’ve seen scoliotic curves as small as 10 degrees, all the way up to 155 degrees. From that alone, you can see how bad scoliosis can get.

The single best way to approach a scoliosis diagnosis is by being proactive. The best way to do this is to start treatment right away, as soon as a diagnosis is reached. While the traditional approach involves waiting until the condition is judged severe enough to treat, here at the Scoliosis Reduction Center, we see that as wasted valuable treatment time.

If you or a loved one is facing a scoliosis diagnosis, I encourage you to explore all treatment options available to you.