How to Prevent Scoliosis from Getting Worse

While saying the way to prevent any condition from getting worse is to actively treat it might sound overly simplistic and obvious, when it comes to scoliosis, the key word is ‘actively’. This is because there are two main approaches to scoliosis treatment, and they differ greatly. Before we delve into the differences between a traditional and a conservative approach, let’s first explore progression.

Can You Prevent Scoliosis From Getting Worse?

One of the biggest challenges to treating scoliosis is trying to stay ahead of its progression. The reason I say this is because each and every patient’s scoliosis has its own rate of progression.

Although I can look at a patient’s X-rays and learn everything I need to know about their condition, I can’t tell how much or how fast their condition will progress; that being said, there are known patterns of and triggers for progression that can help me predict the likeliest rate of progression.

The biggest known factor that affects progression is age.

Regardless of what stage of life a patient is in, scoliosis will almost always get worse. While there are multiple factors that can contribute to how and why a patient’s scoliosis progresses, the biggest one is age, and this is related to growth and development.

Basically, the more growth a patient has to go through before reaching skeletal maturity, the likelier it is that their curvature will progress rapidly.

Growth is the number-one trigger for progression, which is why adolescent idiopathic scoliosis is the condition’s most common form.

When growth is no longer a factor, as a curvature progresses, the spine is vulnerable to compressive forces that affect the spine, its nerves, and surrounding muscles. This is why scoliosis is most often painless for younger patients, but painful for older patients.

The average rate of progression for a later-stage adult, meaning 50+ for females and 60+ for males, can be anywhere from 2 to 4 degrees a year. 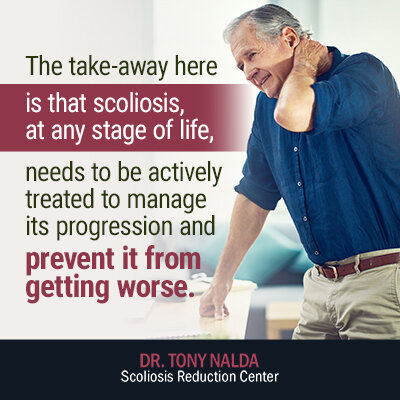 The take-away here is that scoliosis, at any stage of life, needs to be actively treated to manage its progression and prevent it from getting worse.

What it Means to Actively Treat Scoliosis

To understand what it means to actively treat scoliosis, you need to understand the two main approaches to scoliosis treatment and how they differ: traditional vs. conservative.

Instead of active, the traditional approach to scoliosis treatment can be described as ‘passive’. This is because what it often involves, especially in cases of adolescent scoliosis, is a lot of watching and waiting.

While observation does have its place, solely observing a condition as it progresses unimpeded is opposite to the active approach we take here at the Scoliosis Reduction Center.

The traditional approach of observing a patient’s condition to see if and how fast it’s going to progress doesn’t offer anything in terms of actually stopping a curvature from getting worse.

In adolescent cases, prescribing a Boston or Providence brace is common, but as these only ‘hold’ a scoliosis and don’t ‘correct’ it, they have limited effectiveness. At their most effective, these types of scoliosis braces can only keep progression at bay, but do nothing to actually address the structural issue of the curvature and reduce it.

For adults, the traditional orthopedic approach offers nothing in terms of slowing scoliosis progression.

What any patient with scoliosis needs is a multifaceted approach that is fully customized and doesn’t rely on just one form of treatment, and this principle is what we’ve built the Scoliosis Reduction Center around.

The Conservative Approach to Scoliosis Treatment 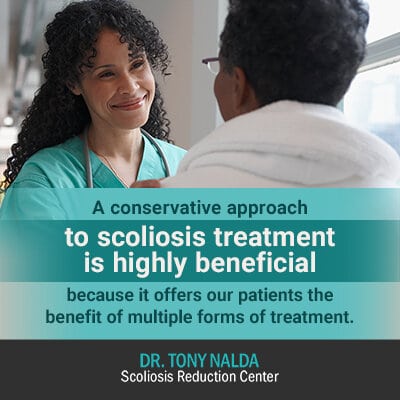 A conservative approach to scoliosis treatment is highly beneficial because it offers our patients the benefit of multiple forms of treatment. Here at the center, our approach includes chiropractic adjustments, exercise, therapy, rehabilitation, and custom corrective bracing. Rather than one form of treatment, our treatment plans include multiple disciplines that are accessible under one convenient roof.

In order for a scoliosis treatment plan to be effective, it has to include elements of multiple treatment forms, not just one. This is because we don’t just want to stop a curvature from progressing; we want to actually address the structural issue by reducing it.

Basically, the best way to stop scoliosis from getting worse is by not trying to simply hold the curvature in place, but actively reducing it. Leaving a curvature untreated and simply hoping it will get better leads to more progression and wastes valuable treatment time.

Seizing valuable treatment time is a priority for me. If a patient gets a reduction and then continues on with passive treatment and does nothing to keep that reduction, it’s likely to return to where it was at the beginning and continue to get worse.

Since every form of treatment has a limited time on a reduction, we’re never going to be able to gain back everything we could have achieved. Even with effective conservative treatment plans, the average reduction tends to be about 30 percent.

For every 3 degrees of progression, we can potentially only get back one of those three degrees. To better explain this, if we took care of you at 25 degrees and reduced you to 15 degrees, that’s far better than letting your curve progress to 35 degrees, taking off the same 10 degrees, and ending up at 25 degrees.

In the above scenario, you’re back to where you were, but we would have missed all the opportunity of where you could have been because treatment started after the condition was left to progress.

The best way to prevent scoliosis from getting worse is to actively treat it by reducing it; the worst thing to do is nothing because, quite simply, it’s going to get worse.

With the traditional orthopedic approach, other than the limited effectiveness of prescribing a nighttime brace, there is nothing that actually addresses the structural issue of the curvature. For adults, the traditional approach is even less worthwhile as braces aren’t as effective in the later stages of life, especially in terms of reduction.

An active conservative approach involves combining the benefits of multiple forms of treatment and customizing that approach to address the individual characteristics of each patient’s condition.

What every scoliosis patient needs, and deserves, is a comprehensive treatment plan that’s going to reduce the curve and work to hold that reduction, and that’s what we offer here at the Scoliosis Reduction Center.