What Will Happen if Scoliosis Isn’t Treated?

Scoliosis isn’t just a deformity marked by a spine that bends to the side with rotation; it’s also a progressive condition. What this means is that if left untreated, it’s almost always guaranteed to get worse. The uncertain variable is how fast that progression will occur, and that depends on a number of characteristics that involve both the condition and the patient.

Fortunately, with proactive treatment, scoliosis progression can be managed and controlled. If it’s left to progress on its own without treatment intervention, the curve is bound to get bigger; then, the more relevant question becomes, “What does a bigger curve mean?” An important part of that answer depends upon an understanding of scoliosis progression, so let’s start there.

‘Progression’ is a fancy term for a condition getting worse. If a condition is classified as ‘progressive’, it simply means that it’s in the condition’s nature to get worse over time. In the context of scoliosis, getting worse means the curve is increasing in size.

When a person is diagnosed with scoliosis, the condition is classified based on a number of variables, and it’s those variables that shape the patient’s experience with the condition.

Those variables include age of patient, type of curve (meaning the cause), severity of the curve, and the location of the curve along the spine. In terms of progression, age of the patient is a big determining factor.

That being said, there is no way to know exactly at what rate a patient’s scoliosis is going to progress, but age is a big indicator of the most ‘likely’ rate of a patient’s progression.

Growth is the number-one trigger for progression, and that means that adolescents entering into the rapid growth-and-development stage of puberty are most likely to experience rapid progression.

If an adolescent patient with scoliosis doesn’t engage in active treatment, their curvature is likely to get bigger quickly. Of course, a number of other factors such as what has caused the condition to develop, if known, and how severe the curve is at the time of diagnosis, also plays a role in the likely rate of progression. 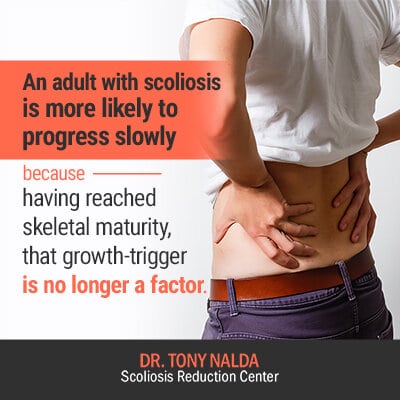 An adult with scoliosis is more likely to progress slowly because having reached skeletal maturity, that growth-trigger is no longer a factor. However, as adults reach later stages of life, progression is likely to pick speed up. Often, this increase is partially due to degenerative changes in the spine that can be a natural part of aging.

Now, let’s move on to what a curve becoming larger actually means to the patient.

What Can a Larger Curve Affect?

Scoliosis has a big range in terms of severity. When a person is first diagnosed, one of the most important pieces of information that helps us shape their treatment plan is how severe the condition is; this is determined by the patient’s Cobb angle.

With a scoliosis X-ray, I can get all the information I need about a patient’s condition. I can confirm the diagnosis, determine in which direction the scoliosis bends, where along the spine it has developed, and how severe the curvature is.

It’s the size of the curvature that determines how severe the condition is, and this is provided by the patient’s Cobb angle (a measurement taken from the most tilted vertebrae of the curvature).

Where a patient’s condition lands on this severity scale is very important because it tells us exactly where we’re starting from and where we want to go. The goal of our active treatment approach here at the Scoliosis Reduction Center is to reduce our patients’ curvatures, and we do this by initiating treatment as soon as possible.

The sooner treatment is started, especially for condition’s in a milder stage, the more likely it is that the patient will experience a successful treatment outcome, meaning their curve is reduced.

Scoliosis in its earlier stage and milder forms is easier to treat. As scoliosis progresses, the spine becomes more rigid and is harder to manipulate.

If a patient is told that their condition isn’t severe enough to warrant treatment and that the condition should be observed for a period, I really caution against this as valuable treatment time is being wasted. I always remind people that there is no harm in reducing a small curve to smaller, but there can be a lot of harm associated with letting a small curve get bigger.

So if a patient’s curvature is moderate or large, but isn’t causing them any functional issues, what’s the big deal about it getting bigger? This is a natural question to ask, and this is why a lot of patients choose the path of least resistance when it comes to passive treatment, but a curve left to progress unimpeded can cause complications down the road: complications that could have been avoided if active treatment was made a priority earlier on.

Larger spinal curvatures are correlated with a number of potential complications. A larger curve means a larger spinal deformity; the most obvious result of this being more obvious postural issues and physical asymmetries.

While scoliosis isn’t always accompanied by pain and functional deficits, that doesn’t mean it doesn’t change a person’s physique. As remarkable as the human body can be at adjusting and adapting to a variety of physical deformities and conditions, that doesn’t mean they don’t come with a cost. 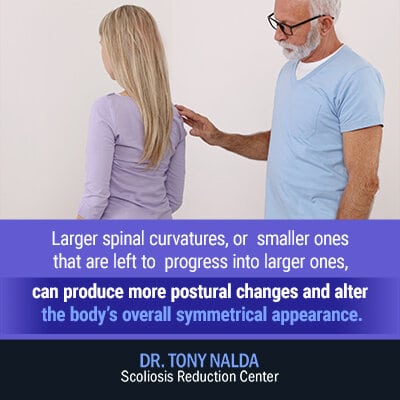 When it comes to scoliosis, most patients find the visual effects to be the most disturbing. Larger spinal curvatures, or smaller ones that are left to progress into larger ones, can produce more postural changes and alter the body’s overall symmetrical appearance.

The following are postural changes that larger scoliosis curves are associated with:

Once these postural changes have started to take effect, they can also affect the way a person walks, their sense of balance, and how their clothes fit.

For adults with scoliosis that is left untreated, the most noticeable result is pain. While pain is rarely part of the adolescent experience of scoliosis, adults are different.

As growth is no longer a factor, their spines are vulnerable to the compressive force of the curvature and its effect on surrounding nerves and muscles. As a curvature progresses, the compression can cause radiating pain in the back, neck, arms, legs and feet; it’s most often pain that brings adults in to see me.

Adults are also dealing with the natural degenerative effects of aging on the spine, and coupled with scoliosis, they are particularly vulnerable to spinal damage, disc degeneration, and developing degenerative conditions.

If left untreated, adults are also more likely to experience the potential complications of compromised organ functionality that severe scoliosis is associated with, such as lung impairment and digestive issues.

Generally speaking, the bigger the curve, the more likely additional complications such as postural changes, mobility issues, headaches, pain, and organ complications are; this is why the most effective treatment strategy is to engage in active treatment as close to the time of diagnosis as possible.

As the nature of progressive conditions, like scoliosis, are to worsen over time, the longer they are left untreated, the worse they will get; in addition, related complications become more and more likely to develop as time goes by and the condition becomes more severe.

This is why our Scoliosis Reduction Center approach is to start treatment as soon as possible. Not only does this approach mean acting immediately, it means that chances of achieving a curvature reduction are significantly higher as the spine is more flexible in the condition’s earlier stages.

While those following the traditional treatment approach might opt for observing and reacting to the condition only when it reaches a certain severity level, I feel strongly that this is wasting valuable treatment time.

When it comes to treating scoliosis, it’s never too late to start active treatment, but the sooner it’s started, the better the chances of treatment success are.