What is Thoracic Scoliosis?

Thoracic scoliosis is diagnosed when a patient develops a scoliotic curve along their thoracic spine, with rotation, and a Cobb angle measurement of 10+ degrees. While scoliosis can develop anywhere along the spine, the thoracic spine is the most common site for the condition to develop. As an abnormal sideways curvature of the spine that coincides with spinal rotation, scoliosis can take many forms and vary greatly from one patient to the next.

In order to better understand thoracic scoliosis, let’s first take a look at some basic spinal anatomy and how it’s divided into three main sections.

Basic Anatomy of the Spine

The spinal cord works in tandem with the brain to form the body’s central nervous system; this system allows parts and systems within the body to communicate with one another for optimum health and function.

Messages are sent between the brain, the spinal cord, and other parts of the body. The central nervous system plays a role in controlling multiple bodily functions such as awareness, sensations, movements, speech, memory, and thoughts. 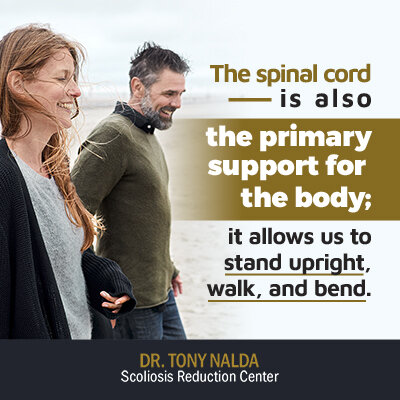 The spinal cord is also the primary support for the body; it allows us to stand upright, walk, and bend.

The spinal cord is divided into three main sections: cervical, thoracic, and lumbar. Cervical refers to the upper back and neck; thoracic includes the middle back, and lumbar makes up the lower back.

When a patient is given a diagnosis of thoracic scoliosis, that classification tells them their scoliosis is located along the thoracic spine.

If we ever see a left thoracic scoliosis, we consider that an atypical case and it’s approached as having a high likelihood of an underlying pathology at play. Types of underlying pathologies would include a neuromuscular condition or disease, such as cerebral palsy, some type of structural deformity within the spine itself, such as congenital scoliosis, or tumours.

The most common type of thoracic scoliosis would be a right, instead of a left, and the apex of the curve would be in the thoracic area. 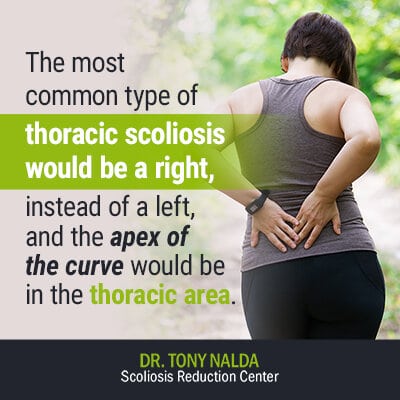 Scoliosis can develop along different portions of the spine, and it can also progress at wildly different rates. I’ve seen two patients that present with very similar forms of scoliosis at the same age with the same size curvature, but one progresses slowly, while the other rapidly.

Part of the challenge of treating scoliosis is approaching each patient knowing that their condition will have its own unique set of treatment needs and experienced symptoms.

In cases of a primary thoracic scoliosis, one of the most common symptoms is the rib deformity and postural changes it causes. Thoracic scoliosis is far more likely to affect posture noticeably than a lumbar scoliosis.

Shoulders can also appear to be uneven, with one sitting higher than the other. If you are noticing the appearance of a rib deformity, uneven shoulders, and a general asymmetrical appearance to your body, it’s more likely that you have thoracic scoliosis than lumbar or cervical.

In light of the important roles that the spinal cord plays in the overall functioning of the human body, it’s understandable how a spinal deformity, such as scoliosis, can cause some unexpected effects.

The thoracic spine is the longest portion of the spine extending from the base of the neck to the abdomen. It’s also often considered the most complex as it connects to both the cervical spine above and the lumbar spine below. The spine’s thoracic portion provides it with stability, while the cervical and lumbar portions are known more for facilitating mobility.

While scoliosis can develop at any age and at any location along the spine, adolescents with a curve in their thoracic spine represent the condition’s most common form. If the apex of a patient’s curvature is located in the spine’s thoracic portion, their condition will be classified as thoracic scoliosis; this name tells us where their curvature is and also some of the likely symptoms they’ll experience, such as a rib deformity.

If left untreated, it’s likely that a patient’s scoliosis will continue to progress, although at what rate is impossible to know. We know that growth is the number one trigger for progression, which is why scoliosis is the most common in adolescents and young adults facing unpredictable and rapid growth spurts.