Cervical Kyphosis: What Is The Best Treatment For Kyphosis?

The term kyphosis refers to spinal curvatures that bend outwards, away from the body’s center. Cervical kyphosis is an exaggerated kyphotic curve in the cervical spine (neck) that gives the upper back a rounded-forward appearance, and the best treatment will depend on the type of kyphosis in question.

Before moving on to the specifics of cervical kyphosis, including different forms and treatment needs, let’s start with some basic spinal anatomy for a better understanding of how the condition affects the spine.

When a healthy spine is viewed from the front or back, it appears straight; when it’s viewed from the sides, it has a soft ‘S’ shape, and this is because the spine has natural and healthy curvatures that characterize each section.

The spine is naturally curved, instead of straight, because it makes it stronger, more flexible, and better able to evenly absorb and distribute mechanical stress.

When the spine loses one or more of its healthy curvatures, the biomechanics of the entire spine are disrupted as it becomes misaligned, and this can impact the body in different ways.

There are three main sections of the spine: lumbar (lower back), thoracic (middle/upper back), and cervical (neck).

As mentioned, each section has a characteristic curvature type. There are two main types of curvatures: lordotic and kyphotic.

Normal lordosis is found in the lumbar and cervical spinal sections, and when the spine’s lordosis becomes over pronounced, it’s also called hyperlordosis, and can cause a swayback appearance.

The thoracic spine features a kyphotic curve, which is why kyphosis most commonly develops in the middle/upper back, but it can also affect the cervical spine (neck). When a kyphotic curve becomes hyperkyphotic, it is over pronounced and can cause a roundback appearance.

While each curvature of the spine has a natural curvature-degree range, when a curvature moves beyond that natural and healthy range, problems can occur.

While many cases of cervical kyphosis aren’t serious, in severe cases, the neck’s abnormal spinal curvature can cause it’s vertebrae (bones of the spine) to pinch the spinal cord, and this can cause damage and interfere with the central nervous system’s function. 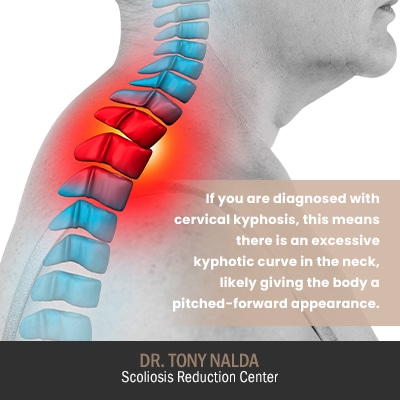 If you are diagnosed with cervical kyphosis, this means there is an excessive kyphotic curve in the neck, likely giving the body a pitched-forward appearance.

Now that we have explored some basic spinal anatomy and defined cervical kyphosis, let’s discuss what common symptoms of the condition can include.

Spinal conditions like kyphosis are highly variable, meaning no two cases are the same, which is also why it’s important that treatment plans are fully customized to address the specifics of each patient and their condition.

Important variables such as patient age, condition severity, and type will play into the kinds of symptoms that develop.

Some common symptoms of cervical kyphosis include:

If cervical kyphosis progresses in severity, it can lead to more noticeable and serious symptoms such as:

Again, while every case is unique and will produce its own equally-unique set of symptoms, knowing the aforementioned signs and symptoms of cervical kyphosis to watch for can lead to early detection and proactive treatment: two things that increase chances of treatment success.

The term causation refers to the underlying cause behind a condition’s development, and when it comes to addressing the question of what causes cervical kyphosis, the answer will, again, depend on the condition type in question. 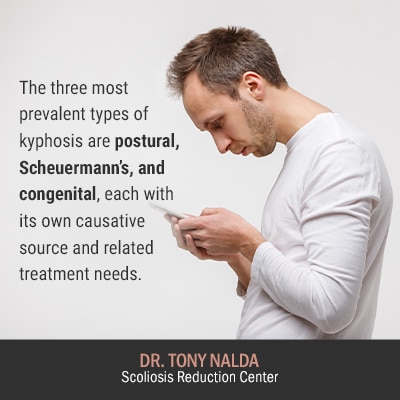 The three most prevalent types of kyphosis are postural, Scheuermann’s, and congenital, each with its own causative source and related treatment needs.

Postural kyphosis is the most prevalent type, and this form is caused by chronic bad posture like slouching, not standing up straight, and spending too much time slumped forward looking down at devices.

It most commonly develops during adolescence as poor postural habits can lead to the ligaments and muscles of the neck becoming stretched, and this means they are less able to provide the cervical spine with the support and stabilization needed for it to maintain its healthy curvature-degree range.

As the muscles and ligaments become stretched, they can pull on the cervical spine’s vertebrae until they are no longer aligned with the rest of the spine, and this causes the condition’s characteristic roundback appearance.

Postural kyphosis is more prevalent in girls than boys, has a flexible curve, and isn’t commonly associated with pain or functional deficits.

As this type is caused by poor posture, it is not related to a structural abnormality within the spine itself, making it the easiest type of kyphosis to treat.

If a person with postural kyphosis was to make an active effort to change their posture and/or body position, they would be able to straighten the cervical spine’s abnormal curvature, and this is the difference between a condition that’s postural, and one that’s structural and can’t be altered by position changes alone.

Typical treatment plans for cervical kyphosis would include educating the patient on the merits of good posture, addressing bad postural habits, and increasing core strength so the spine’s surrounding muscles/ligaments are strengthened and can provide the spine with optimal support and stabilization.

Scheuermann’s kyphosis is caused by a structural abnormality within the spine itself, making it a more complex and serious condition.

Unlike cases of postural kyphosis where changes to position and posture can reduce/correct the cervical spine’s hyperkyphosis, the nature of Scheuermann’s necessitates a different type of treatment approach.

In a healthy spine, its vertebrae are rectangular in shape which allows them to remain stacked on top of one another in a neutral and healthy alignment; in cases of Scheuermann’s kyphosis, one or more of the spine’s vertebrae are triangular in shape, causing them to wedge together and curve forward, resulting in the excessive forward-rounding of the upper back and neck.

Like postural kyphosis, Scheuermanns’s also commonly develops during adolescence, but is more common in boys than girls.

Scheuermann’s kyphotic curves are rigid because of the misshapen vertebrae, which is why changes in position won’t help change the curve.

Scheuermann’s kyphosis can cause varying levels of pain, depending on important patient/condition characteristics like age and condition severity, and pain is most commonly felt during long periods of standing, sitting, or activity.

Causation, when known, drives the crafting of customized and effective treatment plans, so when it comes to treatment efficacy and cervical kyphosis, first and foremost, because the condition is structural, it has to be impacted on a structural level.

The above disciplines can complement one another and work together to reduce the abnormal kyphosis of the cervical spine on a structural level, strengthening the spine, and increasing core strength for better spinal support/stabilization by its surrounding muscles and ligaments.

While treatment results can never be guaranteed, here at the Scoliosis Reduction Center, I’ve treated many different types of structural spinal conditions, including cervical kyphosis.

Through a conservative treatment approach that combines multiple treatment disciplines such as kyphosis-specific chiropractic care, in-office therapy, custom-prescribed home exercises, and corrective bracing, I can impact the condition on a structural level in the form of a curvature reduction.

I then work towards increasing core strength so the muscles and ligaments that surround the spine can optimally support it.

Like Scheuermann’s, due to the nature of congenital kyphosis, it is more complex to treat.

Congenital kyphosis is a condition that develops in utero due to issues of bone malformation within the spine itself, making it a structural condition.

Infants are born with congenital kyphosis, and the condition can progress with age, growth, and development, which is why being proactive with treatment is so important to try and counteract the curvature’s tendency to progress with growth.

As cases of congenital kyphosis involve a malformed spine, it’s not uncommon for other areas of the body to be malformed, so these young patients need to be carefully examined, assessed, and monitored.

I address the unique challenges of treating congenital kyphosis by modifying treatment plans to suit younger patients with lots of growth ahead of them.

Treatments can include kyphosis-specific chiropractic care, a variety of therapies, and in certain cases, bracing.

The spine is an important part of the human anatomy; it gives the body structure, allows us to stand upright and maintain good posture, engage in flexible movement, and facilitates brain-body communication.

As such, there are a number of spinal conditions that can develop, many of which involve the loss of healthy spinal curvatures and alignment.

If a person develops kyphosis, the spinal section affected will have an excessive forward-rounding curvature that causes a pitched-forward appearance.

While it more commonly affects the thoracic spine, cervical kyphosis involves an exaggerated kyphotic curve in the neck that can lead to forward head posture and a number of other issues.

When it comes to the best treatment for cervical kyphosis, here at the Scoliosis Reduction Center, I combine multiple treatment disciplines for the most customized and effective results.