What Are The Symptoms Of Scoliosis In Adults & Adolescents?

The aforementioned symptoms will vary based on important patient and condition characteristics such as age, condition type, severity level, and curvature location. Before moving on to the specific symptoms associated with the different types and severity levels of scoliosis, let’s talk about how scoliosis affects the body generally.

How Does Scoliosis Affect the Body?

As scoliosis develops, there is an abnormal sideways spinal curvature, including rotation, that disrupts the spine’s overall health and biomechanics.

As the spine’s natural and healthy curvatures are necessary for optimal spinal health and function, the development of an unnatural and unhealthy curve can affect the body in multiple ways.

Not only does the development of a scoliotic curve affect the spine directly, it can also impact other areas of the body as a misaligned spine can lead to postural deviation in the back, shoulders, shoulder blades, ribs, pelvis and hips.

In addition, as the spine and brain work in tandem to form the body’s central nervous system (CNS), enabling communication between the brain and the rest of the body, scoliosis can impact the body’s communication center.

People with scoliosis can also suffer from headaches, some reaching migraine status, as a scoliotic curve can disrupt the flow of cerebrospinal fluid (CSF) within the spinal canal.

An important aspect of scoliosis is that there are not only different types of the condition that can develop, but also a wide range of condition severity, and these kinds of variables, including patient age, curvature location, and the patient’s overall health, combine and shape a person’s experience of how it affects the body.

Basically, how scoliosis affects the body will be different for everyone, which is why it’s so important that treatment plans are fully customized to address the specifics of each patient and their condition.

As a progressive condition, this means scoliosis has it in its nature to get worse over time, especially if left untreated, or not treated proactively, and this means the unnatural spinal curvature is likely to increase in size, along with related symptoms.

Again, while every case is different, in general, the main effects scoliosis has on the body are related to overall symmetry and pain, but this can change based on a number of factors, two of the most important being condition type and severity.

The different types of scoliosis that can develop are idiopathic (the condition’s most common form), neuromuscular, degenerative, congenital, and traumatic.

‘Idiopathic’ means, quite simply, that we don’t know why the condition has developed, at least we haven’t clearly identified a single-known source; idiopathic scoliosis is, instead, considered to be multifactorial, meaning caused my multiple variables that can change from one person to the next.

For our current purposes, we’ll focus our discussion of scoliosis symptoms on the most common forms to affect adults (idiopathic and degenerative) and adolescents (adolescent idiopathic scoliosis).

Now, let’s talk about how condition severity is determined.

Condition severity is an important variable that guides the crafting of treatment plans, and this is determined by a measurement known as ‘Cobb angle’. 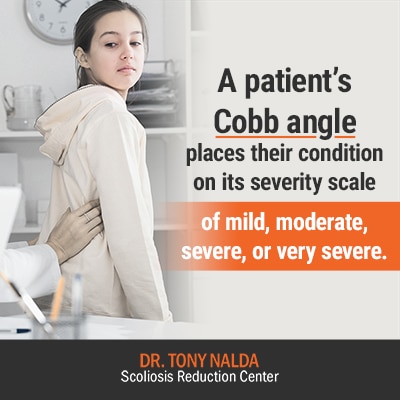 A patient’s Cobb angle places their condition on its severity scale of mild, moderate, severe, or very severe.

Again, while each case is as unique as the patient themselves, in general, the higher the Cobb angle, the more severe the condition, and the more likely it is to produce noticeable symptoms such as postural changes and pain, although pain is more common in adults.

As scoliosis introduces a lot of uneven forces to the body that don’t just affect the spine, but also its surrounding nerves and muscles, common symptoms of scoliosis can include postural changes that impact the body’s natural symmetry and pain, which is experienced more frequently by adults.

The reason pain is more commonly associated with adult scoliosis is related to skeletal maturity. In people who are no longer growing, they are vulnerable to compression caused by the abnormal curvature, and that can be felt by the spine and its surrounding muscles and nerves.

As mentioned, there are different condition types that can develop, but the two most common to affect adults are idiopathic and degenerative, so let’s talk about common symptoms associated with these forms.

The most prevalent type of scoliosis to affect adults is ‘idiopathic’, and these cases are continuations of adolescent idiopathic scoliosis (AIS) that were neither diagnosed, nor treated during adolescence.

Again, while every case is different, many cases of AIS don’t start producing noticeable postural changes, at least not noticeable to the average person untrained in how to recognize the condition’s early signs, until significant progression has occurred.

As mild forms of the condition are also not commonly associated with functional deficits, it can be quite difficult to achieve early detection, which can lead to young people progressing through adolescence, and into adulthood, unaware of their condition.

This is a common occurrence as cases of mild AIS don’t always produce noticeable symptoms. As adults tend to experience a significant amount of condition-related pain, conversely, adolescents do not as they are still growing, and this means that for adolescents, condition-related pain isn’t a common signifier that something is wrong with the spine.

As mentioned, it’s pain that is the number-one reason adults come to see me, and the unfortunate reality is had these adult patients been diagnosed and treated during adolescence, their spines would be much healthier and their conditions would have been much easier to treat.

Smaller curvatures are less complex to treat because they are milder, more flexible, have not yet progressed significantly, and the body hasn’t had ample time to adjust to their presence.

While back, shoulder, and neck pain is a common complaint of adults with scoliosis, nerve-related pain is another common symptom, particularly pain that radiates into the legs and feet due to nerve compression caused by the uneven force of the curvature.

Postural changes associated with idiopathic scoliosis in adults involve a prominent lean to one side and overall uneven posture that affects the body’s natural symmetry. Postural changes related to scoliosis are more noticeable when in a forward-bend position.

Following are some common symptoms of adult idiopathic scoliosis:

Again, as scoliosis is such a variable condition, with different patients experiencing vastly different symptoms and severity levels, there is no one-size-fits-all experience of life with scoliosis.

Degenerative scoliosis tends to affect adults over the age of 40 as spinal degeneration, which can be a natural part of aging, starts to impact the integrity and function of the spine.

In addition, the cumulative effect of certain lifestyle choices such as not maintaining a healthy weight, leading a sedentary life, chronic bad posture, and repeatedly lifting heavy objects incorrectly can contribute to spinal degeneration.

Most commonly, it’s the spine’s intervertebral discs that start to deteriorate, and as the discs perform several important functions, this can compromise the spine’s ability to maintain its healthy and natural curvatures.

The intervertebral discs have a tough and durable outer layer that give the spine structure, and a soft gel-like interior that facilitates spinal flexibility. In addition, the discs act as the spine’s shock absorbers and provide cushioning so the vertebrae (bones of the spine) don’t rub up against each other.

When the spine’s discs start to deteriorate, they can become dehydrated, lose height, and impact the spine’s structure, causing it to become misaligned and develop an abnormal spinal curvature.

Some common symptoms of degenerative scoliosis include:

While rates of progression tend to slow once skeletal maturity has been reached and the big trigger of growth is removed, adults do still progress, and when spinal degeneration comes into play, progression can increase, which is why proactive treatment is always the best choice, regardless of age.

Now that we have explored the two main types of scoliosis to affect adults, plus common symptoms they are associated with, let’s move on to exploring how the condition can affect adolescents differently.

While every case is, once again, different, AIS is not commonly described as painful, nor are mild forms associated with overt symptoms like noticeable postural changes and functional deficits; this is why, despite its benefits in terms of treatment, early detection of AIS is not always easy to achieve. 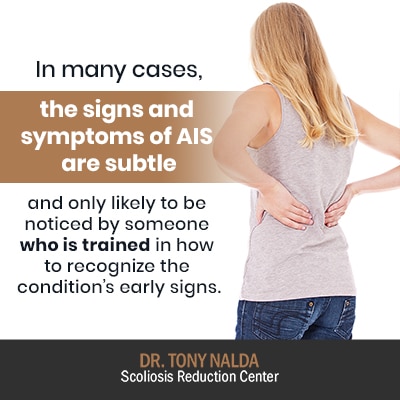 In many cases, the signs and symptoms of AIS are subtle and only likely to be noticed by someone who is trained in how to recognize the condition’s telltale early signs.

At one time, schools across the United States conducted mandatory scoliosis screening, but now, the onus of knowing what signs to watch for falls on the shoulders of parents, and adolescents themselves.

While no treatment results are guaranteed, there are significant benefits associated with early detection and proactive treatment applied early on because as scoliosis is progressive, staying ahead of a condition’s progressive line can mean sparing patients the hardships of escalating condition severity; remember, idiopathic scoliosis is the most prevalent type to affect adults because it’s possible for AIS to remain unnoticed until adulthood.

What are the Symptoms of Adolescent Idiopathic Scoliosis?

As is the case with scoliosis in adults, no two cases of AIS are exactly the same, including experienced symptoms. While some adolescents might only experience one or two of the following symptoms, others might experience several, and most impact the body’s overall symmetry in the form of postural changes that can include:

Condition severity plays a large role in determining the level of symptoms produced by a condition and whether they are subtle or overt.

As early detection can be particularly beneficial in cases of AIS, as this age group is at risk of rapid-phase progression, knowing the various signs and symptoms to look out for can help lead to a diagnosis and proactive treatment.

While scoliosis is commonly seen as a childhood and adolescent spinal condition, it also affects adults.

In terms of experienced symptoms, every case is different, which is why the very nature of the condition necessitates a customized and integrative treatment approach.

Here at the Scoliosis Reduction Center, every treatment plan is crafted to address the specifics of each patient and their condition for the best possible treatment results.

In addition, the conservative chiropractic-centered treatment approach we offer integrates multiple treatment disciplines that can be apportioned accordingly, in response to how the spine is responding to treatment.

The most common symptom of scoliosis in adolescents involves postural changes such as uneven shoulders and hips.

As a condition progresses in severity, related symptoms tend to increase, and in severe and very-severe scoliosis cases, both in adolescents and adults, additional condition-related complications can arise such as mobility issues, overt postural changes, increasing pain levels (more common in adults), lung impairment, sleep problems, headaches, digestive issues, and more.

The bottom line is, regardless of age, proactive treatment can work towards making positive changes to the condition and patients’ overall quality of life. People with scoliosis need to be proactive in their approach to managing their condition, and here at the Scoliosis Reduction Center, we have the knowledge, experience, training, and equipment to help patients do just that.