What Is Degenerative Scoliosis? Cause, Symptoms, & Treatment

While scoliosis most commonly develops during adolescence, adults can also develop the condition. Degenerative scoliosis is one of the most common forms of adult scoliosis; it’s caused by a weakening of the spine, and its parts, caused by the cumulative effect of lifestyle choices and aging. It is most common in adults over the age of 40.

Before we move on to discussing the specifics of degenerative scoliosis and what causes it, let’s first take a look at scoliosis as a general condition and how it affects adults.

The most common form of scoliosis is diagnosed between the ages of 10 and 18 as adolescent idiopathic scoliosis (AIS).

The ‘idiopathic’ designation means there is no single known cause that we can attribute its onset to. It is, instead, considered to be multifactorial, meaning it’s caused by multiple factors, or the combination of certain factors.

This is why scoliosis is often described as a ‘mysterious’ condition; despite all the efforts made to better understand its etiology, we still have not been able to clearly isolate a single cause.

Scoliosis is also progressive and incurable. What this means is it’s in its nature to get worse over time, and while we can treat it effectively to manage its progression, we can never fully cure a person of their scoliosis; it is a condition they will carry for life.

When it comes to scoliosis in adults, there are two main forms: adult idiopathic scoliosis and adult degenerative scoliosis (ADS).

The majority of cases of adults with scoliosis are extensions of AIS. While it can seem hard to imagine that a spinal condition marked by an abnormal sideways curvature could go unnoticed, this is indeed often the case.

Depending on how severe a condition is, based on the patient’s degree of curvature, their condition can range from mild to moderate, and severe.

In mild forms of the condition, the postural changes the curvature is known to produce aren’t always noticeable, and in most cases, they rarely cause functional deficits.

In addition, AIS is rarely painful. This is because as that age group has not yet reached skeletal maturity, their spine is experiencing a constant lengthening motion, and this counteracts the compression of the spine and its surrounding muscles and nerves, known to be the cause of scoliosis-related pain.

This is why it’s so common for adults to have lived with scoliosis for so many years unknown, and not realize it until reaching skeletal maturity.

Once a person stops growing, they are going to be vulnerable to the compression caused by the abnormal curvature, not to mention the fact that as they have had it for years, it has likely progressed and become more severe.

Add to that the degenerative effects that can accompany aging, and you have adults experiencing back pain and struggling with other scoliosis-related symptoms such as headaches, sleep problems, and postural changes.

At this stage, it’s most often pain that brings adults in to see me. Commonly, it’s not even back pain that brings them in, but rather pain that radiates into the arms, legs, and feet due to compression and pinched nerves.

Now that you can see how the other common form of adult scoliosis develops, let’s return to the main focus: degenerative scoliosis.

What is Degenerative Scoliosis?

Degenerative scoliosis is most common in adults over the age of 40, and women are more prone to it due to changes in bone density and hormones that accompany menopause.

When it comes to the parts of the spine most vulnerable to degeneration, we are referring to the intervertebral discs.

The intervertebral discs sit between the bones of the spine (vertebrae), acting as the spine’s shock absorbers, and cushions preventing the vertebrae from rubbing up against each other and speeding up degeneration.

The intervertebral discs are made of a tough outer layer and a soft gel-like center; the discs act as ligaments holding the spine together and their flexible fluid-filled centers help to facilitate movement.

The discs don’t have their own vascular supply so they can’t replenish themselves, meaning once they start to erode and lose their inner fluid, those effects are hard to reverse.

A person not drinking enough water, leading a sedentary lifestyle, with poor posture, or not lifting heavy objects properly, can lead to the cumulative effect of intervertebral disc degeneration.

It’s through movement that the discs are stimulated to replenish their fluid levels; when people spend too much time sitting and not enough time moving, the discs are going to degrade faster.

As the discs lose fluid, they can become flatter, not providing as much cushion between the bones, and this also speeds up the degeneration of the vertebral bodies as they are rubbing unnaturally against one another.

In addition, healthy spine movement increases blood flow to the intervertebral discs, and the nutrients and fluid transported in the blood helps to keep them replenished and in good health.

Basically, without continued movement, the intervertebral discs start to deplete and will continue to do so if active efforts aren’t made to reverse the habits that are negatively affecting them.

In addition, there is also strong supporting evidence for a connection between certain genetic defects and structural and functional changes inside the intervertebral discs. 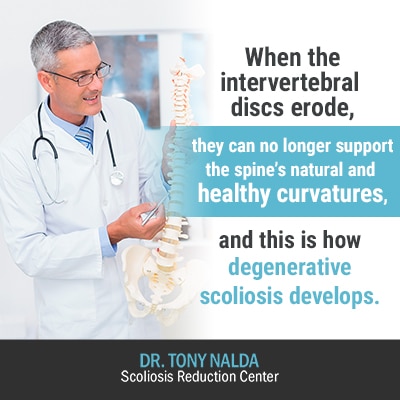 When the intervertebral discs erode, they can no longer support the spine’s natural and healthy curvatures, and this is how degenerative scoliosis develops.

When it comes to living with degenerative scoliosis, there are multiple factors that can shape a person’s experience of it.

Scoliosis develops across a wide severity spectrum from mild to moderate, and severe. Depending on where a person’s condition falls within that range, they can experience mild or severe symptoms.

That being said, following are symptoms most commonly associated with degenerative scoliosis:

A Loss of Height

Someone suddenly seeming shorter or to have developed bad slumping posture could be a sign that they are living with the effects of degenerative scoliosis.

When the intervertebral discs lose their inner fluid, they lose their cushioning appearance and affect as they become flatter; this, and the spinal misalignment that can occur as a result, can result in a noticeable ‘shrinking’ appearance.

Another common symptom of ADS is pain that is more prevalent on one side of the body; it’s most often felt in a hip, leg, knee or foot.

This is because ADS makes the spine abnormally bend in one direction, and the resultant slump can cause pain and discomfort.

Factors such as where along the spine the degeneration is occurring and which nerves are being pinched can also result in radiating pain felt in different areas of the body.

Neck ache can be a common complaint of people living with degenerative scoliosis as the neck is the connection point between the spine and the skull.

When scoliosis develops, it shifts the spine more in one direction, and this shift can result in extra pressure on that connection point, causing pain; headaches can be another common result of this. 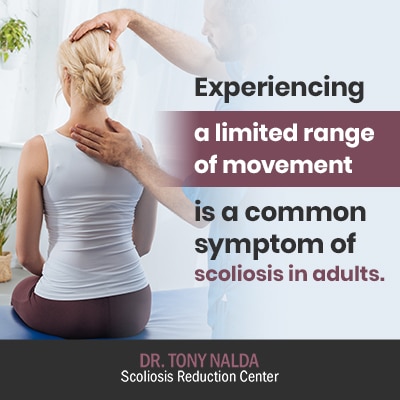 Experiencing a limited range of movement is a common symptom of scoliosis in adults. This is partially caused by pain as it often results in people becoming less active and less likely to engage in physical activity that can exacerbate their discomfort.

When back pain is responded to with a lack of movement, this can make the condition worse as it leads to more spinal rigidity and less flexibility: a symptom of scoliosis progression.

In addition, the abnormal spinal curvature that changes the structure of the spine can simply make movement more difficult, even when it’s not caused by pain.

Sometimes, adults can experience difficulty with certain movements such as lifting one’s arm over one’s head, an inability to fully bend over, and an overall reduction in flexibility.

Now that we have covered the cause and symptoms of adult degenerative scoliosis, let’s now address how to treat it.

ADS is progressive and is not going to resolve on its own. That’s why it’s extremely important to seek out active treatment, with the potential to bring relief, by restoring the health of the intervertebral discs and vertebrae.

People should also start treatment as soon as possible before the condition worsens or causes additional complications.

There are a few treatment options available for patients with ADS. Unfortunately, as mentioned earlier, while the health of the intervertebral discs can be restored by reversing bad habits contributing to their degeneration and working to reduce the scoliotic curve, it is not a quick or easy process.

For those willing to commit to a proactive alternative and functional treatment plan, an integrative approach combining scoliosis-specific chiropractic adjustments, bracing, stretching and exercises can work to slowly replenish the intervertebral discs and restore the spine’s overall biomechanics.

For patients with severe forms of ADS, initial work might have to be done to restore some of their mobility before they are even able to perform certain restorative movements and exercises.

I work closely with each and every patient to create a fully customized treatment plan that addresses any and all symptoms they might be experiencing.

By addressing the underlying structural nature of the condition, we can impact the spine by working to restore the health and function of the intervertebral discs and vertebrae, reducing its abnormal curvature, and stabilizing and supporting the spine’s alignment.

When a person is diagnosed with scoliosis, part of that process is assessing and classifying their condition. We do this based on a number of condition and patient characteristics, one of which is cause, if known.

With degenerative scoliosis, we know the abnormal sideways curvature and rotation of the spine is caused by spinal instability; in older individuals, this is commonly the result of genetics, lifestyle, and the degenerative effects of aging.

Most commonly affecting the health of the intervertebral discs, this is serious because the spine’s discs help preserve the health and function of the vertebrae and the spine as a whole.

When the spine becomes weak, it can slip out of alignment, and when there is a slip, the spine’s natural and healthy curvatures can no longer be supported, and this is how degenerative scoliosis develops.

Fortunately, here at the Scoliosis Reduction Center, we have treated countless adult degenerative scoliosis patients and have seen how well the spine and its parts can respond to active treatment.

While it might be a long road to relief, we walk with our patients side by side throughout the entire treatment process to ensure they are getting the best chance of treatment success.