In the condition’s most common form, adolescent idiopathic scoliosis (AIS), early detection can be challenging, but it is particularly beneficial; this is because while all forms of scoliosis are progressive, adolescents are prone to rapid-phase progression, meaning their abnormal spinal curvature can get worse quickly.

In addition to scoliosis screening tests such as the Adam’s forward bend test, awareness of how to identify scoliosis early is the best way to increase the chances of noticing a loved one’s condition early on. Early detection is beneficial because it means starting proactive treatment sooner and leads to better potential treatment outcomes.

Before we move on to the specific signs and symptoms of scoliosis to watch out for, let’s look at some of the condition’s defining features, including its progressive nature and the merits of early detection.

Essentially, scoliosis is defined as having an abnormal sideways curvature to the spine that includes rotation.

In addition, in order for scoliosis to be diagnosed, the spinal curvature has to measure at 10+ degrees. This is determined via X-ray and a measurement taken known as the ‘Cobb angle’.

A patient’s Cobb angle is determined by drawing lines from the tops and bottoms of the curvature’s most-tilted vertebrae (bones of the spine), and the intersecting lines form an angle: the Cobb angle.

The Cobb angle places the condition on its severity scale of mild, moderate, or severe:

Although every condition is unique, condition severity becomes one of its defining features as it indicates the types of likely symptoms and postural changes a person will experience; in addition, it also factors into the design of a patient’s treatment plan and how subtle, or overt, the condition’s signs and symptoms are. 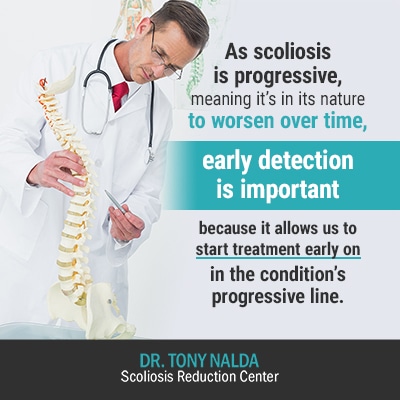 As scoliosis is progressive, meaning it’s in its nature to worsen over time, early detection is important because it allows us to start treatment early on in the condition’s progressive line. As a curvature increases in size, not only is it more likely to produce adverse symptoms and postural changes, it’s also more difficult and complex to treat.

Let’s move on to exploring the merits of early detection.

As mentioned, adolescent idiopathic scoliosis (AIS) is the most common form of scoliosis by a staggering percentage: AIS cases account for 80 percent of known diagnosed scoliosis cases. The remaining 20 percent are forms with known causes such as congenital, neuromuscular, degenerative, and traumatic.

The ‘idiopathic’ designation of AIS means there is no single known cause, and the age group affected is between 10 and 18; this is the age group we will focus on for our current purposes.

Now, it’s important to say that while we don’t fully understand the etiology of the condition’s most common form, I most certainly know how to manage and treat it effectively.

Early detection is particularly beneficial in cases of AIS because we know that growth is the condition’s biggest trigger for progression, and clearly, those entering into, or who are in, the stage of puberty are going to be going through rapid and unpredictable growth spurts.

That being said, it’s also important to mention that while we know what triggers progression and certain factors that make progression more likely, there is no definitive way of determining a patient’s progressive rate, meaning how fast, or slowly, their curvature is going to progress.

So why is early detection so important then? It’s important because a condition that’s diagnosed at 15 degrees is likely to be more responsive to treatment than a curvature that has already progressed to 25 degrees, is 10 degrees larger, and the body has had that much more time to adjust to the abnormal spinal curvature.

Basically, we want to stay ahead of every patient’s progressive line, and that means watching how their spine is responding to treatment and adjusting our customized treatment plan as needed.

There are two main scoliosis treatment approaches to choose between: traditional and functional.

In the traditional approach, the main response to mild and moderate forms of the condition is to watch and wait, not to start active treatment immediately.

In the functional approach we offer here at the Scoliosis Reduction Center, we believe that watching and waiting to ‘see’ if a patient’s condition progresses, when we know that virtually every case progresses at some point, is wasting valuable treatment time and funneling patients towards spinal-fusion surgery; this is a crucial difference in treatment approach that I want all patients and their families to be aware of.

So, basically, if a parent has opted to treat their adolescent with the traditional approach, even if that parent did all the right things, knew the signs and watched out for them, took their child to be screened, and was diagnosed with scoliosis, their child won’t  be privy to the benefits of early detection because this approach favors observation over active treatment.

While early detection doesn’t automatically guarantee positive treatment results, it most certainly increases its chances, which is why screening is so important.

Now, let’s talk briefly about a noninvasive scoliosis screening test that is an effective means of determining whether an individual has indicators for the condition that warrant further testing.

There was a time when scoliosis screening was offered readily by schools across the nation, but that has since changed as each individual state makes the choice of whether or not to screen for scoliosis in schools.

What this means for parents and/or caregivers of adolescents no longer undergoing scoliosis screening in school is that the onus falls on the adults to notice the condition’s sometimes subtle signs and symptoms.

In addition to the fact that the condition’s symptoms can be subtle and, especially in milder forms, rarely produce noticeable functional deficits, AIS is rarely painful; while this is a good thing for those living with the condition, in terms of early detection, an absence of pain makes it that much harder to spot that something is amiss in the body.

If parents and/or caregivers of adolescents are concerned that scoliosis could be an issue, a visit to their health-care provider for scoliosis screening is always a good idea.

Most likely, the doctor will take the patient’s medical history, perform a physical examination, and an Adam’s forward bend test.

This involves the patients standing in an upright position with arms at their sides. Then they will bend forward at the waist in a 90-degree angle so their arms are hanging down in front.

In this position, the individual bones of the spine are highly visible, not to mention any related postural asymmetries caused by the condition.

A scoliometer is often used in conjunction with the Adam’s test, which is a device that helps to measure a misaligned spine and determines the degree of trunk rotation, if present.

As there is always a rotational component to structural scoliosis, an Adam’s bend test paired with a scoliometer reveals this as the torso commonly expresses the presence of the condition in the form of a rib arch, which is also more visible in a forward-bend position.

Basically, an Adam’s forward bend test, combined with a scoliometer, is a highly effective screening method for determining if a patient has indicators of the condition that warrant further testing. This screening test can be the first step on the road to answers and treatment.

Screening tests such as the Adam’s forward bend test can be particularly helpful as scoliosis, especially in milder forms, can be very difficult to notice; this is why awareness of the signs and symptoms of scoliosis to watch for is so important for knowing how to identify scoliosis early.

Scoliosis Signs and Symptoms to Watch For

While every case of scoliosis is different based on the unique characteristics of each individual patient and their condition, when it comes to early detection, here are some telltale scoliosis signs to look out for.

The most obvious signs of AIS are related to posture and symmetry: the appearance of the shoulders, shoulder blades, and the back:

In addition, adolescents whose clothing suddenly seems to be ill-fitting could be a sign: necklines that seem to favor one side of the body, clothing arms and legs that seem to hang at different lengths.

Changes to the way an adolescent walks can also be an indicator for scoliosis, which is why observing how a patient walks is always part of my physical screening exams. Often, scoliosis patients have their arms held more tightly to their sides during motion, and balance issues can also come into play as the uneven forces at work with scoliosis can shift the body’s center of gravity. 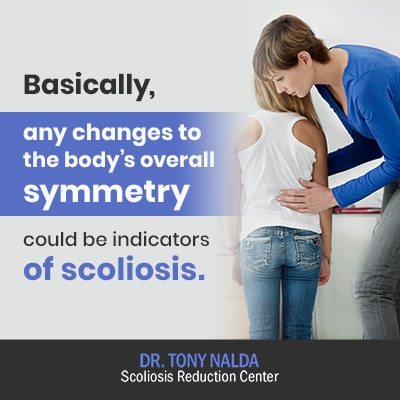 Basically, any changes to the body’s overall symmetry could be indicators of scoliosis. While having one or two of these signs aren’t proof-positive that scoliosis is present, it does indicate a need for further testing.

If you suspect a loved one might have scoliosis, the time to act is immediately. Reaching an adolescent idiopathic scoliosis diagnosis is the first step on the road to treatment, and early detection carries a lot of benefits in terms of treatment efficacy.

When it comes to the signs and symptoms of scoliosis to watch out for, any postural changes that affect a body’s overall symmetry are concerning and could indicate the presence of the condition.

Fortunately, the Adam’s forward bend test is a noninvasive screening method that can help confirm, or rule out, the presence of the condition.

Here at the Scoliosis Reduction Center, our functional approach is proactive. We want to start treatment as close to the time of diagnosis as possible not only because it’s easier to treat smaller spinal curvatures, but also because we want to spare our patients, and their families, the hardships associated with the higher stages of progression.

So regarding how to identify scoliosis early, knowledge is power. The importance of understanding scoliosis screening, the merits of early detection, and how AIS affects the body, in terms of signs and symptoms, makes parents and/or caregivers the best possible advocates for their children.