Bracing is a common form of treatment for scoliosis; kyphosis is another spinal condition that involves a loss of the spine’s healthy curves, but instead of a sideways scoliotic curvature, kyphosis is an exaggerated forward rounding of the upper back. There are different types of kyphosis, and treatment needs, including bracing, will depend on the condition’s underlying cause.

When it comes to bracing as a form of kyphosis treatment, the ultra-corrective ScoliBrace, for treating scoliosis, has a sister product designed primarily to treat kyphosis: the KyphoBrace. An effective kyphosis back brace can impact kyphosis on a structural level and help stabilize the spine.

Before getting to the specifics of the KyphoBrace, let’s first discuss the spine’s natural curvatures, and why their loss can be so problematic.

The spine’s natural and healthy curves make it stronger, more flexible, and better able to absorb and distribute stress from movement and impact.

There are three main spinal sections: cervical (neck), thoracic (middle/upper back), and lumbar (lower back), and each section has its own characteristic curvature type.

Kyphosis refers to the spine’s natural outward curve that bends away from the body’s center in a reverse C-shape; this curvature type is found in the thoracic spine.

The spine’s natural lordosis features curves that bend inwards, towards the body’s center, in a ‘C’ shape, and this curvature type is found in the cervical and lumbar spinal sections. 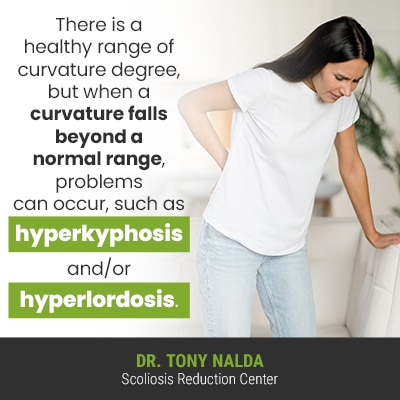 There is a healthy range of curvature degree, but when a curvature size falls beyond a normal range, problems can occur, such as hyperkyphosis and/or hyperlordosis.

When the thoracic spine’s kyphotic curve measures greater than 50 degrees, this is considered excessive and is diagnosed as hyperkyphosis: a term that’s also used interchangeably with kyphosis by medical professionals.

So now that we understand the spine’s natural curvatures and have defined kyphosis (hyperkyphosis), let’s focus on types of kyphosis that best respond to the use of a kyphosis back brace in treatment.

Kyphosis Treatment and the KyphoBrace

Here at the Scoliosis Reduction Center, when my patients need a brace as part of their scoliosis treatment, I value the modern and dynamic ScoliBrace as it represents the culmination of what we’ve learned about scoliosis, and bracing as a form of treatment, over the years.

The success of the ScoliBrace prompted the expansion of a sister product, the corrective KyphoBrace, to help reduce excessive kyphotic curves and stabilize the spine.

When the spine loses one or more of its natural and healthy curvatures, they are replaced by bad curves, and these involve the vertebrae (bones of the spine) becoming misaligned due to their unnatural tilt.

As mentioned earlier, there are different types of kyphosis a person can develop, based on varying causative sources, and treatment needs will be case-specific and driven by the underlying cause.

In addition to causation, factors such as patient age, condition type, severity, and experienced symptoms will factor into the design of effective treatment plans.

Let’s now address the different types of kyphosis and corresponding treatment needs, including the use of a corrective kyphosis back brace.

As the thoracic spine features a kyphotic curve, hyperkyphosis involves an excessively rounded-forward upper back, which is why the condition is commonly referred to as roundback; conversely, hyperlordosis, that involves an excessive inward curvature of the upper or lower back, is known as swayback, due to how it causes the abdomen and buttocks to protrude excessively.

Thoracic hyperkyphosis involves an overpronounced kyphotic curve isolated to the thoracic spine, and in some cases, hyperkyphosis can engage vertebrae in more than one spinal section: thoracolumbar hyperkyphosis.

In thoracolumbar kyphosis, it’s the vertebrae of the lower thoracic spine and the upper lumbar spine that are excessively rounded forward.

While there are no treatment guarantees, in these types of cases, the KyphoBrace can be effective by working towards preventing further progression, as well as reducing the spine’s excessive kyphosis.

The KyphoBrace is most commonly recommended for kyphotic curves measuring between 50 and 80 degrees.

The KyphoBrace pushes the spine into a corrective position via a pair of pivoting shoulder paddles that hyperextend the upper thoracic spine, reducing the kyphotic curve and achieving corrective results.

Holding the upper spine in this extended corrective position, over time, can start to impact it on a structural level, while providing essential spinal support/stabilization.

Scheuermann’s Hyperkyphosis and the KyphoBrace

Scheuermann’s kyphosis (hyperkyphosis) develops during growth and is a structural condition caused by a structural abnormality within the spine itself.

The condition develops during adolescence and is twice as prevalent in males, than in females.

Although Scheuermann’s causation isn’t fully understood, in many cases, the vertebrae of the spine are malformed and are more triangular in shape, rather than healthy rectangular-shaped vertebrae that can stack easily on top of one another in a straight and neutral alignment.

As Scheuermann’s is a structural 3-dimensional spinal condition, the KyphoBrace is 3D-designed to impact the condition on every level. 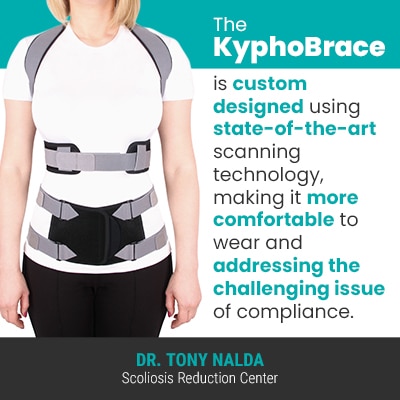 The KyphoBrace is custom designed using state-of-the-art scanning technology, making it more comfortable to wear and addressing the challenging issue of compliance.

Considering Scheuermann’s kyphosis commonly develops during adolescence, between the ages of 10 and 18, an age group not exactly known for their transparency and compliance, bracing as a form of treatment can be a challenge if not worn properly as prescribed.

If a brace isn’t worn as prescribed by the treatment provider, its effectiveness will be limited, and this is a common issue associated with traditional braces that tends to be mass-produced and not as comfortable or discreet to wear.

The KyphoBrace addresses compliance challenges by customizing each and every brace to suit the patient’s body and curvature type, making them less bulky and noticeable, having them easily open in the front for ease of taking off and putting on, and being available in a variety of patterns and colors so patients can further customize the look of their KyphoBrace.

Not only does the KyphoBrace work towards preventing progression and reducing the kyphotic curve, it also provides much-needed support and stability for the unnaturally-curved spine.

Here at the Center, just as I favor the use of the modern and corrective ScoliBrace for my scoliosis patients, I opt for the KyphoBrace to meet my kyphosis patients’ bracing needs, when appropriate.

Maintaining the spine’s natural curvatures and alignment are key to preserving its optimal health and function.

There are a number of spinal conditions that involve a loss of one or more of the spine’s healthy curves, and each of the spine’s main sections has a characteristic curvature type: kyphosis or lordosis.

While there is a natural range of curvature degree for both kyphosis and lordosis, when a person’s curvature range falls beyond that normal range, problems such as hyperkyphosis can occur.

With hyperkyphosis, we’re talking about the thoracic spine, and sometimes the thoracolumbar spine, having an excessive kyphosis of 50+ degrees, and when this happens, the upper back’s outward curvature becomes over-pronounced: giving the shoulders and upper back a pitched-forward posture.

Fortunately, there are many different types of treatment that can complement one another by preventing progression, reducing the hyperkyphotic curve, and providing the spine with optimal stabilization; the kyphosis back brace is one such treatment option.

Here at the Scoliosis Reduction Center, when appropriate, I favor the use of the ultra-corrective ScoliBrace to meet my bracing needs in scoliosis treatment, so for my kyphosis patients, it’s no surprise that I turn to the ScoliBrace’s sister product: the KyphoBrace.

The KyphoBrace addresses the 3-dimensional nature of hyperkyphosis and impacts it on a structural level while providing optimal support and stability for the spine and its surroundings.