Kyphosis vs Lordosis: What Are The Differences Between Them?

The spine has natural and healthy curvatures that range in size from one person to the next. The spinal curves have a normal curvature-degree range, but problems can occur once a curvature type falls beyond that normal range. Kyphosis and lordosis (aka hyperkyphosis and hyperlordosis) are spinal conditions that refer to a loss of the spine’s healthy curves.

Kyphosis and lordosis are types of spinal curvatures. Kyphosis is a type of spinal curve that bends outwards, while lordosis curvature types bend inward towards the body’s center. The thoracic spine is kyphotic, while the cervical and lumbar sections above and below are lordotic.

To better understand the role of the spine’s natural curvatures in spinal health and function, let’s start with some basic anatomy of the spine.

The spine is a key structure in human anatomy because it’s the body’s main weight-supporting structure and because it allows us to stand upright, practice good posture, engage in flexible movement, and absorb mechanical stress.

The spine’s natural curvatures make it stronger, more flexible, and better able to absorb and distribute shock from impact.

In addition, the brain and spine work in tandem to form the body’s central nervous system: a vast communication network that sends/receives messages between the brain and the rest of the body.

The spine’s role in brain-body communication is why spinal conditions can cause such far-reaching effects felt throughout the body.

The spine has three main sections: cervical (neck), thoracic (middle/upper back), and lumbar (lower back).

Each of these spinal sections has its own characteristic curvature type, and as the spine is one structure, the integrity of each spinal curve is dependent upon the others.

So now that we know the main spinal sections and the reason the spine is curved in the first place, let’s talk about the different curvature types: kyphosis vs lordosis.

As mentioned, the spine’s natural curvatures can vary in size from one person to the next, and this is measured as curvature degree.

As long as a person’s kyphosis and lordosis stay within these normal levels, the spine’s natural curvatures will help the spine function optimally, but once a curvature becomes over-pronounced, it disrupts the biomechanics of the entire spine and will require treatment. 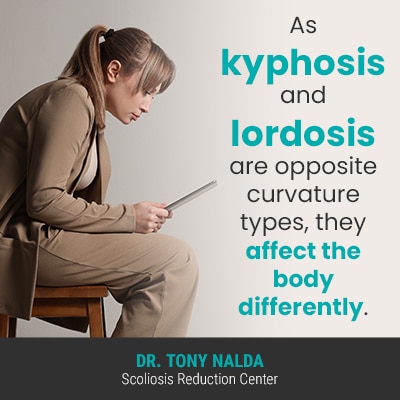 As kyphosis and lordosis are opposite curvature types, they affect the body differently.

So how do these two spinal conditions affect the body similarly, and differently, in terms of symptoms?

As hyperkyphosis involves an over-pronounced backward spinal curvature, it can cause a forward shift in posture that gives the upper back a pitched-forward appearance with rounded shoulders, known as roundback.

Hyperlordosis involves an over-pronounced inward spinal curvature. The unnatural spinal curve can cause the abdomen to protrude unnaturally and the buttocks to stick out excessively, giving the body a swayback appearance.

In addition to how these conditions affect the body’s overall symmetry, they also cause additional symptoms: some similar, some different.

As you can see, the loss of even a single healthy spinal curve can affect the health and function of the entire spine by disrupting its biomechanics and different curvature locations. Different curvature types produce different symptoms, based largely on where the unnatural curve develops along the spine, severity, and the degree of nerve involvement.

So now that you know the main differences in the two conditions, plus the different symptoms they produce, what causes the spine’s natural kyphosis and lordosis to become excessive?

Causes of Hyperkyphosis vs Hyperlordosis

There are a number of spinal conditions a person can develop that involve a loss of healthy spinal curves, and when it comes to hyperkyphosis and hyperlordosis, there are many causative sources.

In hyperkyphosis, we know the roundback appearance develops because of the thoracic spine’s vertebrae (bones of the spine) becoming more wedge-shaped, and the underlying cause will depend on the type of hyperkyphosis in question, as will treatment needs.

Postural kyphosis (hyperkyphosis) is the most prevalent type, and it’s caused by chronic poor posture.

Slouching too much or bending too far forward to look down at screens can disrupt the spine’s natural kyphosis, and this is most commonly diagnosed in adolescents and is more common in females than males.

Fortunately, this type is also the easiest to treat because it’s not a structural condition, meaning not caused by a structural abnormality within the spine itself, so it can be treated with postural correction, healthy lifestyle changes, and some physical therapy when needed.

Unlike postural kyphosis, Scheuermann’s kyphosis is a structural condition, meaning its treatment needs will be more complex.

Scheuermann’s is diagnosed during adolescence, and in most cases, it develops as the fronts of certain vertebrae don’t grow at the same rates as their backs, eventually causing the bones to form into a wedge shape.

Scheuermann’s is more prevalent in males and tends to stop progressing once skeletal maturity has been reached.

As a structural condition, treatment will, first and foremost, have to impact the spine on a structural level, and here at the Scoliosis Reduction Center the treatment would be chiropractic-centered and combine different treatment disciplines such as condition-specific chiropractic care (adjustments), in-office therapy, and custom-prescribed home exercises.

In cases of congenital kyphosis, infants are born with the condition as it develops due to a malformation in the spine that occurs as the spine itself is developing in utero.

As congenital kyphosis is also a structural condition, its treatment needs are complex, especially considering the severity of the structural issue and the age group.

Here at the Center, I can treat a wide range of spinal conditions in patients of all ages. When it comes to treating congenital spinal conditions, I have to modify treatment plans that I might use for older children to meet the unique challenges associated with treating such young patients.

The reality, however, is that with some severe cases of congenital kyphosis, nonsurgical treatment can only go so far, and spinal surgery might be necessary to address the structural abnormalities within the spine itself. 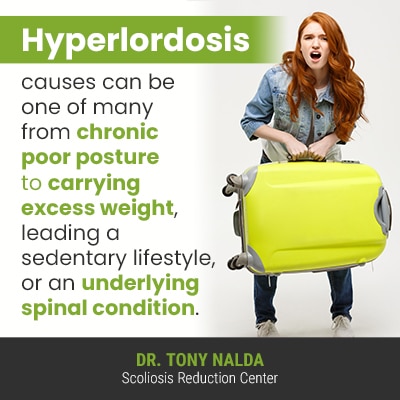 Hyperlordosis causes can be one of many from chronic poor posture to carrying excess weight, leading a sedentary lifestyle, or an underlying spinal condition.

Poor posture can contribute to the development of hyperlordosis as it affects the body in a number of ways; keep in mind that the spine’s biomechanics are dependent on its ability to maintain its natural curves and alignment, so holding the spine in an unnatural position, over time, can start to affect its natural curves.

In addition, when someone spends a lot of time sitting, particularly with bad posture where shoulders aren’t back, and the spine isn’t straight, the muscles surrounding the lumbar spine can become tight as they struggle to support the spine’s unnatural position.

Over time, the kind of pressure from chronic poor posture, and how it can affect the muscles, could cause a misaligned spine and excessive kyphosis in the lower back.

Taking frequent breaks and practicing good posture can minimize the strain on the lower-back muscles.

When a person is carrying excess weight in the buttocks and abdomen area, this also puts excess strain on the lumbar spine and its surrounding muscles.

When the lumbar spine is exposed to excess strain and adverse spinal tension, it can develop an exaggerated lordosis.

As the spine’s very design is based on movement, leading a sedentary lifestyle can cost the spine in terms of structure and function.

A sedentary lifestyle will lead to weakened core muscles due to a lack of use, meaning they are less capable of providing the spine with support/stabilization, making the lower back susceptible to developing an excessive curve.

In addition to the aforementioned lifestyle habits that can contribute to the development of hyperkyphosis, there are a number of underlying spinal conditions such as discitis, spondylolisthesis, and hyperkyphosis.

As the vertebrae of the spine are separated by intervertebral discs that enable flexible movement, give the spine structure, and act as shock absorbers, if discitis develops (infected/inflamed spinal disc), it can impact the position of adjacent vertebrae.

Spondylolisthesis affects the lower spine and involves a shifting forward of a vertebral body onto the one beneath it, putting extra pressure on the vertebra and its disc, and impacting the area’s natural curvature.

In addition, a person with hyperkyphosis can also develop hyperlordosis as the thoracic spine’s excessive kyphosis can cause the development of a compensatory curve in the lower back: increased lordosis.

Similarities between hyperkyphosis and hyperlordosis are that they are both spinal conditions that involve a loss of its healthy and natural curvatures, and both cause postural deviation and varying levels of back pain.

One way the conditions differ is in the different curvature types: kyphosis referring to an inwards C-shaped spinal curve and lordosis referencing an outwards reverse C-shaped curvature.

Also, the two conditions tend to affect different areas of the spine, with hyperkyphosis mainly involving the thoracic spine, and hyperlordosis affecting the cervical and lumbar spinal sections.

The ways in which the two conditions affect the body’s appearance also differ with hyperkyphosis causing an excessive rounding forward of the upper back and shoulders known as roundback, and hyperlordosis causing the buttocks and abdomen to protrude excessively, giving the body a swayback appearance.

Kyphosis and lordosis treatment needs will be case-specific and guided by condition type, whether structural or non-structural, and considering its severity.

Here at the Scoliosis Reduction Center, I have experience treating a wide range of spinal conditions, including hyperkyphosis and hyperlordosis.