Back Brace for Scoliosis: Options & Effectiveness of Braces

Back bracing has been a large component of scoliosis treatment since the condition’s early days; however, there is a big difference between the efficacy of traditional bracing and modern corrective bracing. The super corrective ScoliBrace represents the culmination of what we have learned about bracing and scoliosis over the years. When the ScoliBrace is used as a component of an integrative conservative approach, it can produce big results.

Just as scoliosis is a highly variable condition with vastly different characteristics and forms from one patient to the next, its treatment necessitates a customized and integrative approach. We’ll explore the role of bracing in scoliosis treatment by comparing some of the brace options available.

Bracing has been used as a form of scoliosis treatment for hundreds of years. As a progressive condition, one of the main components of treating the condition is controlling its progression.

‘Progression’ is a fancy medical term that simply means ‘getting worse.’ It’s in the nature of scoliosis to get worse over time, and as it’s an incurable condition, managing that progression is key to helping patients live their best lives.

Controlling progression, however, is quite different from actually addressing the condition on a structural level. This is the big difference between traditional and corrective bracing, which we’ll come back to later.

The most commonly used traditional brace in the United States is the Boston brace. 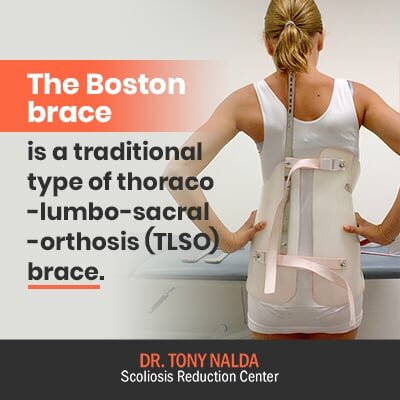 The Boston brace is a traditional type of thoraco-lumbo-sacral-orthosis (TLSO) brace. Commonly used to slow progression in children, its goal is to slow down the spinal curvature’s growth as the spine grows towards skeletal maturity; it does this through strategically-placed pads that put pressure on certain parts of the curvature, encouraging the spine to move out of the curvature and into a straighter alignment.

Named the ‘Boston’ brace, because it was developed in a Boston hospital in 1972, it’s constructed from a hard plastic that wraps tightly around the body under the arms, around the torso, lower back, and hips.

The pads that exert pressure on the curvature are designed to be uncomfortable; the theory being that the patient’s spine will naturally respond by trying to counteract that uncomfortable compression by moving away from it. This is, however, a big challenge of this style of brace. Compliance in children and adolescents to wear an uncomfortable and noticeable body brace for anywhere from 18 to 23 hours a day for as long as up to five years, as you can imagine, is problematic.

Another popular type of traditional brace is worn at night: the Charleston Bending brace.

The Charleston Bending brace is a nighttime brace that attempted to address the aforementioned issues with compliance. The idea was that a brace that exerts a stronger force can be as effective while being worn for less time. The benefit of only having to wear a brace while sleeping also removes the challenge of getting adolescents and teenagers to wear a cumbersome and uncomfortable brace throughout the day, in school, and in front of friends.

This brace differs from the TLSO braces by working to stretch the spine into a better position during sleep. The problem is while it removes the issue of compliance during the day, it’s still difficult to get children and adolescents to wear an uncomfortable brace while trying to get a good night’s sleep. The residual soreness that patients wake up with after wearing the brace for a night is also problematic.

The main issue with these brace options is that their effect isn’t structural. While it pushes and holds the spine in a better position and can slow progression, it’s not addressing the structural issue of the curvature; this is where bracing theory forked and led to the development of the super corrective ScoliBrace.

The ScoliBrace and Scoliosis

The ScoliBrace represents the evolution of bracing for scoliosis treatment in both theory and function, and here is why: corrective bracing differs from traditional in its end goal.

The end goal of traditional bracing is to slow down progression. By placing pressure on certain points of the curvature, the body’s natural response to move away from painful stimulus encourages the spine to reposition itself, and the brace holds it in that position.

As you can likely imagine, holding the spine in a corrective position is not the same as actually working to correct the curvature through a reduction, and this is where the ScoliBrace comes in.

The theory behind corrective bracing is to reduce the wearer’s scoliosis while they are wearing it, and that reduction is augmented by integrating other forms of treatment that all work together to accomplish the same end goal: to reduce the abnormal curvature of the spine at a structural level.

In terms of design, the corrective ScoliBrace differs greatly from the traditional braces used. Each and every ScoliBrace is custom manufactured to suit the body type, curvature, and flexibility of the patient’s spine. The result is a softer, more comfortable, and effective brace.

Here at the Scoliosis Reduction Center, the ScoliBrace is what we use when bracing is deemed beneficial. We use state-of-the-art imaging software called BraceScan that allows us to scan patients for a fully individualized fit.

While traditional bracing strives to slow progression, corrective bracing is designed to reduce the scoliosis at a structural level, which addresses the underlying condition, rather than merely a symptom of it.

ScoliBrace as Part of an Integrative Conservative Approach

The traditional approach to treating scoliosis often involves passively observing the condition while it progresses. While the hope is that it doesn’t progress to a certain level that would need surgery, this is where that approach often leads. Instead of initiating active treatment immediately, the traditional approach is to observe, use traditional bracing, which we’ve discussed, or recommend spinal-fusion surgery once the curvature’s Cobb angle exceeds 40 degrees. 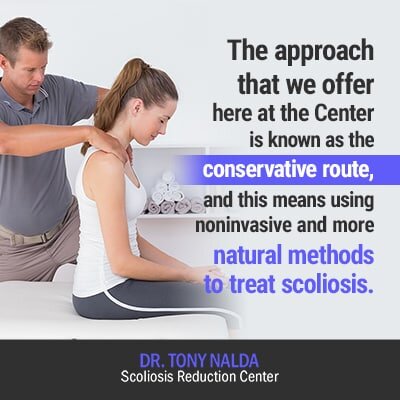 The approach that we offer here at the Center is known as the conservative route, and this means using noninvasive and more natural methods to treat scoliosis. We believe in an integrative approach, which is why we offer our patients access to multiple forms of treatment and the benefits that they offer.

In my years of studying and treating scoliosis, I’ve learned just how to select and apportion different forms of treatment that complement each other to offer my patients the best possible prognosis.

The most common forms of treatment we use are all scoliosis-specific: chiropractic, therapy, rehabilitation, and the corrective ScoliBrace. These disciplines work together to increase flexibility, achieve a curvature reduction, increase mobility, and sustain the corrective results throughout treatment and beyond.

Scoliosis is a complex condition that can take many forms. It can range from mild, to moderate, or severe. The more severe a condition is, the more likely it is to cause postural changes, discomfort, and related complications.

In the condition’s most common form (adolescent idiopathic scoliosis), causation is understood as multifactorial, meaning its development can’t be linked to one specific cause, but is instead regarded as the result of multiple factors. Not only can these factors vary from person to person, the condition that develops also varies greatly from one individual to the next.

For these reasons, it’s important that any effective approach to treatment involves customization so the individual symptoms, severity, and condition characteristics are addressed and treated.

Here at the Scoliosis Reduction Center, our approach is to fully customize treatment and work with our patients to address the structural aspect of the condition. This is why we favor the ultra corrective ScoliBrace as it is fully customized, corrective, and works towards our ultimate treatment goal of addressing the condition’s structural nature.

While there are multiple brace options to choose from, not all are created equal. If you are considering bracing as a scoliosis treatment option, be sure you are educated on the differences between traditional and corrective bracing.