Anterior Scoliosis Correction: What It Is & Alternatives

There are different approaches to treating scoliosis, some more invasive than others. Surgery is invasive and costly and should be considered only after exploring non-surgical options. Anterior Scoliosis Correction is a less-invasive surgical treatment option than traditional spinal fusion.

Anterior Scoliosis Correction is considered a less-invasive surgical option than traditional spinal fusion. Small anterior incisions provide access for attaching screws and a flexible tether to the spine. Tension on the tether pulls the spine back into alignment, eliminating the scoliotic curve.

Before getting to the specifics of Anterior Scoliosis Correction, let’s first define the condition itself.

Scoliosis is a highly-prevalent spinal condition that involves the development of an unnatural sideways spinal curve, with rotation and a minimum Cobb angle of 10 degrees.

A patient’s Cobb angle is a measurement taken during an X-ray that tells me how far out of alignment a scoliotic spine is and places conditions on a severity scale of mild, moderate, severe, or very severe:

As you can see from the wide range of Cobb angle measurements, scoliosis is a highly-variable condition, and in addition to varying in severity, there are also multiple condition types, curvature locations, and a variety of scoliotic curve types and patterns. The complex nature of scoliosis necessitates the customization of effective treatment plans.

Scoliosis introduces a lot of uneven forces to the body, which is why the main symptom of scoliosis in children and adolescents is postural deviation caused by a disruption to the body’s overall symmetry.

Scoliosis is also progressive, meaning it has it in its nature to worsen over time, particularly if left untreated or not treated proactively.

As a progressive condition, where scoliosis is at the time of diagnosis is not indicative of where it will stay. Mild scoliosis can easily progress to become moderate, severe, or very severe; only proactive treatment can prevent future progression.

Once a diagnosis of scoliosis is given, the most important decision is how to treat it moving forward, as different types of treatment offer patients different potential outcomes.

While some surgeries successfully straighten a crooked spine, most cases of scoliosis can be treated non-surgically, and the risks and potential complications of spinal surgery should be considered carefully.

A Surgical Response to Scoliosis Treatment 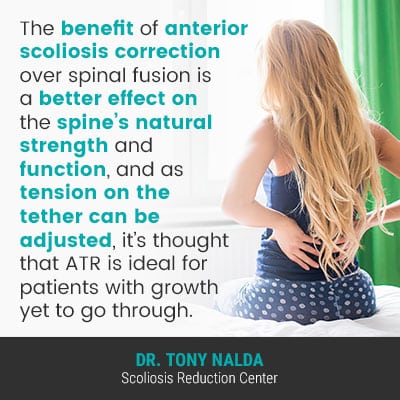 Traditional scoliosis treatment commonly funnels patients towards spinal fusion surgery, and spinal fusion is a lengthy and costly surgery that involves fusing the most-tilted vertebrae of the curve together into one solid bone.

There are different types of spinal fusion, but most involve attaching rods to the spine with screws that hold the spine in place throughout the fusion process; the rods and screws are permanently attached to the spine.

The end goal of spinal fusion is to eliminate movement in the fused section of the spine, which reduces the likelihood of further progression, although it doesn't guarantee it.

Spinal fusion, like all surgical procedures, comes with its share of risks, and even when successful, the procedure can cost the spine in terms of its natural strength and function.

In addition, if the spinal fusion is unsuccessful, the only recourse is more surgery, and there is also a large gap in the research/data on the long-term effects of living with a fused spine and hardware longevity.

What is Anterior Scoliosis Correction?

The process of Anterior Scoliosis Correction is also commonly referred to as Vertebral Body Tethering (VBT), and it involves making small incisions, called portals, along one side of the patient’s body.

A benefit of this process is known as muscle-sparing because, unlike in spinal fusion, muscles are not cut and are instead carefully pulled apart to allow access to the spine; this facilitates a faster recovery time and preserves strength and function.

The idea is that through applying tension on the tether, the spine is pulled back into alignment, thus eliminating the scoliotic curve.

The benefit of anterior scoliosis correction over spinal fusion is a better effect on the spine’s natural strength and function, and as tension on the tether can be adjusted, it’s thought that ATR is ideal for patients with growth yet to go through. 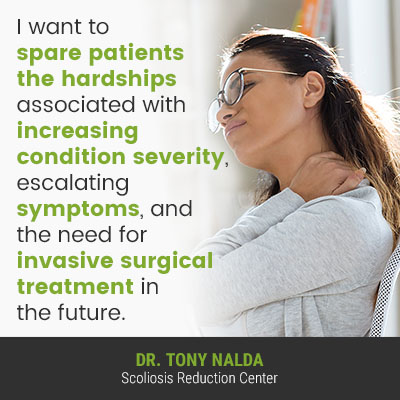 The reality is that most cases of scoliosis can be treated non-surgically, and here at the Scoliosis Reduction Center, I treat patients with a non-surgical chiropractic-centered treatment approach that strives to preserve as much of the spine’s natural strength and function as possible.

As a progressive condition, the best time to start scoliosis treatment is always now; while there are no treatment guarantees, early detection, when responded to with proactive treatment, increases the chances of treatment success.

As scoliosis progresses, this means the unnatural spinal curve is increasing in size, and the uneven forces exposed to the body are also increasing, causing symptoms to increase and making the condition more complex to treat.

As scoliosis progresses, the spine becomes increasingly rigid, making it less responsive to treatment, and the body gets more accustomed to the unnatural spinal curve’s presence.

In addition, there are certain exercises that are key elements of treatment and rehabilitation that require a baseline level of spinal flexibility to perform, so if a patient's spine is too rigid, their ability to perform certain movements is impaired.

Here at the Center, I believe in starting treatment as close to the time of diagnosis as possible, so the curve is at its smallest, most flexible, and when the spine is most responsive to treatment.

I want to spare patients the hardships associated with increasing condition severity, escalating symptoms, and the need for invasive surgical treatment in the future.

Through chiropractic care, I can work towards impacting the condition on a structural level in the form of a curvature reduction; a series of manual adjustments can reposition the curve’s most-tilted vertebrae back into alignment with the rest of the spine.

Through a variety of therapies, I can help patients increase core strength, so the spine is optimally supported by its surrounding muscles.

Corrective bracing can help augment corrective results by pushing the spine into a corrective position.

When a person is diagnosed with scoliosis, the most important decision to be made is how to treat it, and a big part of that is understanding the different potential outcomes offered by each treatment approach.

When it comes to a surgical response, we’re talking about lengthy and invasive surgical procedures that can permanently alter the spine’s natural strength and function.

While spinal fusion is the traditional surgical response to scoliosis, there are newer surgical techniques and procedures that offer non-fusion types of surgery for scoliosis treatment.

Anterior Scoliosis Correction (ASC) is also known as Vertebral Body Tethering (VBT) and involves small incisions (portals) being made down one side of the body, under the arm, through which a camera and scope can pass for optimal visualization.

Through the portals, a surgeon attaches screws to the most-tilted vertebrae of the scoliotic curve, and the screws are attached to a flexible tether.

Adjusting the tension on the tether pulls the spine back into alignment, thus eliminating the unnatural sideways spinal curve.

While Anterior Scoliosis Correction is considered less invasive than traditional spinal fusion, it is still spinal surgery, and for those wanting a safer more-natural option, conservative chiropractic-centered treatment can be the answer.