As scoliosis is progressive, without proactive treatment, a scoliotic curve is left to progress unimpeded, and children/adolescents are at risk for rapid-phase progression due to growth. A Scoliometer is a scoliosis measurement tool that looks for early indicators of the condition, which can lead to early detection and the application of proactive treatment.

When combined with the Adam’s Forward Bend Test, a scoliometer can help screen for indicators of scoliosis, measure the angle of trunk rotation, and reveal the need for further testing. This can help with early detection, reaching a diagnosis,  and increased chances of treatment success.

Before getting into the specifics of the Scoliometer, let’s first talk about the diagnostic process, and as adolescent idiopathic scoliosis is the most prevalent type, that’s the form we’ll focus on currently.

In order for a scoliosis diagnosis to be given, certain parameters have to be met.

In addition to the development of an unnatural sideways spinal curve, it has to have a rotational component (twists from front to back, back to front), and a minimum Cobb angle measurement of 10 degrees.

In adolescent idiopathic scoliosis (AIS), although early detection can be so beneficial, it’s not always easy to achieve.

Firstly, when conditions are mild, they don’t commonly produce functional deficits, and the early condition signs (postural changes) are often subtle and noticeable only to those trained in specifically what to look for.

In addition, scoliosis isn’t commonly known as painful for children and adolescents, and this is because until skeletal maturity has been reached, it doesn’t become a compressive condition.

Once growth has stopped, the lengthening motion of a growing spine no longer counteracts the compressive force of the curvature, and it’s compression of the spine and its surrounding muscles and nerves. That’s the main cause of condition-related pain.

So as AIS isn’t always easy to detect, this is why screening exams are so important as part of the diagnostic process, and this is where the Adam’s Forward Bend Test, combined with a Scoliometer, comes in.

While there was a time when mandatory scoliosis screening was conducted by school nurses, that’s no longer a common occurrence, meaning the onus of recognizing the condition’s early signs falls on the individuals themselves, and their parents and/or caregivers.

When I see a parent with concerns about adolescent scoliosis, I conduct a comprehensive physical exam that includes taking the patient’s medical/family history.

I also observe their general posture and gait; I can tell a lot about a patient’s spinal health by how they walk.

I also conduct what’s known as an Adam’s forward bend test: a noninvasive physical exam involving the patient bending forward at a 90-degree angle with arms hanging down at the sides as if touching the floor.

In this position with the spine parallel to the floor, the spine, and any related abnormalities, including postural deviations such as uneven shoulders, hips, waistline, and a rib arch are far more visible.

The Adam’s test can tell me where along the spine the scoliosis is located, and when combined with a scoliosis measurement tool, the results can be even more reliable and detailed.

Known as a Scoliometer, this scoliosis measurement tool is a type of protractor that can measure the degree of vertebral rotation and rib arching that the Adam’s test indicates.

A Scoliometer looks like a small level, with a ruler side, and an internal bubble that moves to indicate the degree of tilt by aligning with the numbered side.

When in a forward-bend position, the Scoliometer is placed on the back at the apex of the curve, moved up and down the spine, and the amount of tilt is measured in degrees. 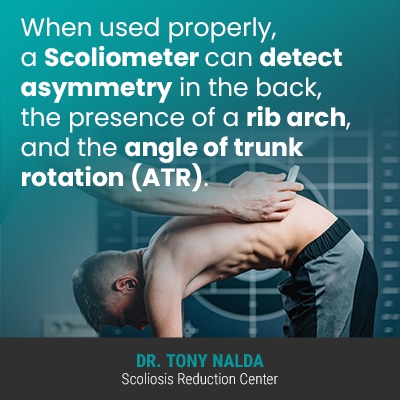 When used properly, a Scoliometer can detect asymmetry in the back, the presence of a rib arch, and the angle of trunk rotation (ATR).

A Scoliometer measurement of more than 7 degrees, taken at the curve’s apex, is considered abnormal and indicates the need for further testing; further testing most often involves the use of X-ray imaging to comprehensively assess what’s happening with the spine, determine the patient’s Cobb angle, and further classify the condition.

Even within a healthy spine, there is a normal range of curvature and rotation degree, with each spinal section having its own healthy range.

For example, the cervical spine (neck) has approximately up to 90 degrees of rotation on each side, while the thoracic spine (middle/upper back) should have a normal rotation range of approximately 30-35 degrees, while the lumbar spine (lower back) has a healthy range of up to 12 degrees.

So what exactly does it mean to have scoliosis, and why are screening tests and scoliosis measurement tools so important?

Scoliosis is a complex condition for many reasons: it ranges from mild to moderate and severe to very severe, there are different types with varying underlying causes, and while the condition is more prevalent in children and adolescents, it can affect all ages.

How Does a Cobb Angle Classify Scoliosis?

In addition, in the majority of cases, scoliosis is idiopathic, meaning not clearly associated with a single causative source; instead, idiopathic scoliosis is thought to be multifactorial, meaning caused by multiple variables that can differ from person to person. 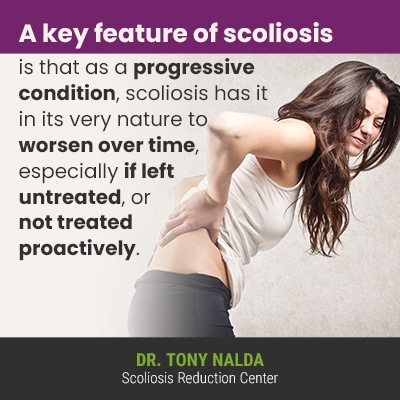 A key feature of scoliosis is that as a progressive condition, scoliosis has it in its very nature to worsen over time, especially if left untreated, or not treated proactively.

Based on a patient’s Cobb angle, conditions are classified on a severity scale of mild, moderate, severe, and very severe.

A patient’s Cobb angle is determined during X-ray by drawing intersecting lines from the tops and bottoms of the curve’s most-tilted vertebrae, and the angle is measured in degrees:

Where a condition is at the time of diagnosis is not indicative of where it will stay; a mild curvature will only stay mild by applying proactive treatment, and not all treatment approaches respond to a diagnosis proactively.

As growth is the known trigger for progression, adolescents diagnosed between the ages of 10 and 18 are at risk for rapid-phase progression because of the stage of growth and development they are in, or are entering into.

For this age group, early detection is particularly important so a diagnosis can be reached, proactive treatment can be applied, and increasing condition severity and escalating symptoms can be prevented.

There’s a reason why the old adage of “an ounce of prevention is worth a pound of cure,” is as relevant as ever, and in the context of progressive conditions like scoliosis, it is especially true.

Here at the Scoliosis Reduction Center, my patients benefit from a conservative chiropractic-centered approach that values proactive treatment applied as close to the time of diagnosis as possible.

While the traditional approach to scoliosis treatment values watching and waiting to monitor for further progression, what this often amounts to is watching the patient’s unnatural curve get larger as it’s unimpeded and is in its nature to do so.

Through screening exams like the Adam’s Forward Bend Test and the use of a scoliosis measurement tool, like the Scoliometer, indicators for scoliosis become evident and reveal the need for further testing.

While the Scoliometer can’t diagnose scoliosis alone, it can measure the degree of trunk rotation, a key element of scoliosis, and through an X-ray, a patient’s Cobb angle measurement can be determined and helps shape the crafting of effective treatment plans.

Remember, while there are no treatment guarantees, it’s far simpler to treat a curve while it’s mild: before significant progression has occurred, spinal rigidity has increased, and the body has had time to adjust to the unnatural curve’s presence.

If you, or a loved one, is concerned about scoliosis, don’t hesitate to reach out to us here at the Center, where our results speak for themselves.