How Do You Know If You Have Scoliosis? Signs & Diagnosis

Scoliosis is a complex condition to treat, and early detection, when responded to with proactive treatment, can increase the chances of treatment success. Knowing how to recognize the condition’s early signs can be the first step on the path to proactive treatment.

When it comes to recognizing the early telltale signs of scoliosis, awareness is key as the condition’s indicators are not always overt, particularly in mild cases. For children and adolescents, the main symptom is postural deviation, and in adults, it’s back or radicular pain.

In order to reach a scoliosis diagnosis, certain parameters have to be met, so let’s start with discussing the diagnostic process.

The spine has three main sections (cervical, thoracic, and lumbar), and each spinal section has a characteristic curvature type: lordosis or kyphosis.

The spine’s natural curves make it stronger, more flexible, and better able to absorb stress incurred during movement, like a coiled spring.

There are a number of spinal conditions a person can develop that involve a loss of its natural and healthy curves, scoliosis being one of them.

In order to reach a diagnosis of scoliosis, there has to be an unnatural sideways spinal curve with rotation and a minimum Cobb angle of 10 degrees.

The rotational component makes scoliosis a 3-dimensional condition as the spine doesn’t just bend unnaturally to the side but also twists from front to back, back to front.

A patient’s Cobb angle is a measurement taken during an X-ray that determines how far out of alignment the spine is and places conditions on a severity scale of mild to very severe:

Part of the diagnostic process involves comprehensively assessing the condition to further classify it based on key patient/condition variables; in addition to condition severity, patient age, condition type, and curvature location are important classification points.

A key condition characteristic is the progressive nature of scoliosis, meaning it has it in its very nature to worsen over time, particularly if left untreated or not treated proactively.

So, where scoliosis is at the time of diagnosis is not indicative of where it will stay.

So, now we know the parameters that must be met to reach a diagnosis of scoliosis. Let’s move on to the condition’s early signs and symptoms and how they differ in adolescent and adult scoliosis.

Signs and Symptoms of Scoliosis in Adolescents 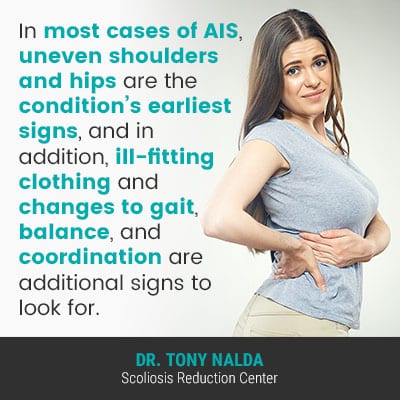 As mentioned, there are different condition types. The most prevalent type of scoliosis is adolescent idiopathic scoliosis (AIS), diagnosed between the ages of 10 and 18.

So for our current purposes, when talking about scoliosis in young patients, we are talking about AIS; the idiopathic designation means this form is not clearly associated with a single-known cause.

While we don’t fully understand what causes idiopathic scoliosis to develop initially, we do know how to treat it effectively, and understanding its causation wouldn’t necessarily change the course of treatment or its outcome.

In addition, we also understand what triggers the condition’s progression: growth and development.

Remember, there is a wide range of condition severity, and when mild, the condition’s early telltale signs can be difficult for anyone other than an expert to notice, which is why for many years, mandatory scoliosis screening was performed in schools, but that has since changed.

Now, the onus to recognize the condition’s early signs, and the need for further testing, falls on the shoulders of the patients themselves and their parents or caregivers.

As mentioned, early detection can be particularly challenging in mild conditions; when mild, scoliosis doesn’t commonly cause functional deficits, and as AIS isn’t commonly painful, it can be difficult to detect early in the condition’s progressive line.

Scoliosis introduces a lot of uneven forces to the body, which is why its earliest signs and symptoms in adolescents involve postural deviation caused by a disruption to the body’s overall symmetry:

In most cases of AIS, uneven shoulders and hips are the condition’s earliest signs, and in addition, ill-fitting clothing and changes to gait, balance, and coordination are additional signs to look for.

While having an asymmetrical feature doesn’t necessarily mean a person has scoliosis, it can warrant the need for further testing.

Another challenge to the early detection of AIS is that the condition isn’t commonly described as painful in young patients, and this is due to growth and development.

Signs and Symptoms of Adult Scoliosis 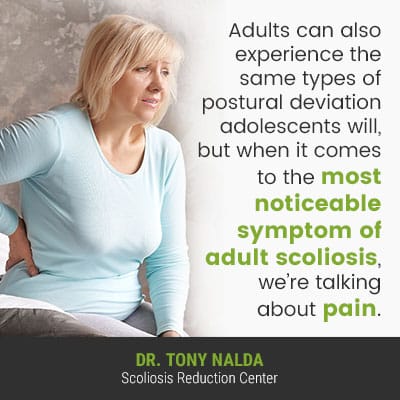 As mentioned earlier, the main symptom of scoliosis in adults is pain, and this can take the form of localized back or radicular pain felt throughout the body.

Scoliosis doesn’t become a compressive condition until skeletal maturity has been reached, which is why a lack of pain in adolescent idiopathic scoliosis can be a challenge to early detection.

In growing spines, the constant upward lengthening motion counteracts the compressive force of the curvature, and it’s compression of the spine and its surrounding muscles and nerves that cause the majority of condition-related pain.

In adults, it’s most often pain that brings them in to see me for a diagnosis and treatment, and the two most common condition types to affect adults are idiopathic and degenerative scoliosis.

Cases of idiopathic scoliosis in adults are extensions of AIS that went undiagnosed and untreated through adolescence, progressing with time and maturity, and once the condition’s become compressive, they start to produce more-noticeable symptoms, like pain.

Degenerative scoliosis is caused by natural age-related spinal degeneration that impacts the spine’s ability to maintain its natural curves and alignment, and the spinal structures that are often the first to experience deterioration are the spine’s intervertebral discs.

Again, adult scoliosis pain can involve localized back pain felt in the spinal section with the unnatural spinal curve, and when there is a degree of nerve involvement, radicular pain can also be felt throughout the body.

In fact, it’s most often pain felt in the hands, legs, and feet that brings many adults in to see me for a diagnosis and treatment.

The spine works in tandem with the brain to form the body’s central nervous system, so when the spine is unnaturally curved, it can expose the spinal nerves to uneven pressure, and this can cause pain felt anywhere along a nerve’s pathway, which can be extensive.

Adults can also experience the same types of postural deviation adolescents will, but when it comes to the most noticeable symptom of adult scoliosis, we’re talking about pain.

Do You Have These 7 Symptoms of Scoliosis?

So how do you know if you have scoliosis? While the only way to definitively know whether or not a person has scoliosis is to seek a professional assessment that can lead to a diagnosis, it is important to know the condition’s early signs.

As a progressive condition, where scoliosis is at the time of diagnosis is not indicative of where it will stay, which is why the best time to start scoliosis treatment is always now.

In children and adolescents, the earliest signs of scoliosis are often uneven hips and shoulders, and this is due to the uneven forces the condition introduces to the body; in adults, the most prevalent symptom is pain.

Pain is more commonly a part of adult scoliosis because the condition doesn’t become compressive until skeletal maturity has been reached.

When it comes to scoliosis treatment, there are numerous benefits associated with early detection, which is why it’s so important to increase awareness of the condition’s early signs and symptoms to look out for.

Here at the Scoliosis Reduction Center, I’ve diagnosed and treated hundreds of scoliosis patients; through combining multiple condition-specific treatment disciplines and customizing treatment plans, I help patients impact their condition on every level.