Optimal spinal health and function is dependent upon a number of factors: the spine’s ability to maintain its natural curvatures and alignment being of primary importance. If the spine develops a condition that causes a loss of its natural and healthy curves, it can cause a number of problems, especially if left untreated, or not treated proactively. Continue reading to learn more about thoracic kyphosis including what it is, its symptoms, and treatment needs.

There are a number of spinal conditions that develop and involve a loss of the spine’s healthy curves: kyphosis being one of them. When a patient’s upper back has an excessive forward curvature, this is diagnosed as thoracic kyphosis and requires proactive treatment that impacts the condition on a structural level.

Let’s start our discussion by first touching on the spine’s healthy curves, and then moving on to the specifics of thoracic kyphosis and treatment.

The spine is naturally curved to make it stronger, more flexible, and better able to evenly absorb and distribute mechanical stress.

There are a number of spinal conditions a person can develop that involve a loss of its healthy and natural curvatures including scoliosis, lordosis, and kyphosis.

In a healthy spine, the vertebrae (bones of the spine) are stacked neatly on top of one another in a natural alignment, but when an abnormal spinal curve develops, the spine becomes misaligned, and the biomechanics of the entire spine are disrupted.

There are three main spinal sections: cervical (neck), thoracic (middle/upper back), and lumbar (lower back), with each section having its own characteristic curvature.

So a diagnosis of thoracic kyphosis would mean there is an excessive forward-rounding curvature of the upper back. 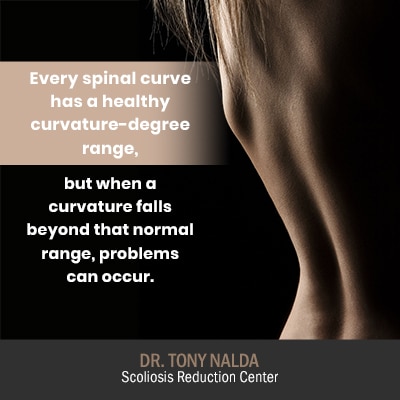 Every spinal curve has a healthy curvature-degree range, but when a curvature falls beyond that normal range, problems can occur.

While every case is different and will produce its own unique set of symptoms based on important patient/condition variables such as age, condition severity, and type, there are some common kyphosis symptoms to watch out for:

Again, it’s important to understand that each case of kyphosis is as unique as the patient themselves, and while one person might experience a number of noticeable symptoms, another might not experience any.

In general, the more severe the kyphosis is, the more likely it is to produce noticeable symptoms.

The answer to what causes thoracic kyphosis will depend on the type of kyphosis in question.

Postural kyphosis is the most common type, and as the name indicates, is caused by chronic bad posture.

This type typically develops during adolescence due to slouching and poor posture that stretches the ligaments/muscles that support and stabilize the spine.

The stretching pulls the vertebrae out of alignment with the rest of the spine, giving the spine an overly-rounded appearance.

This form typically affects girls more than boys, features a flexible curve, and doesn’t commonly cause pain or functional deficits.

If a person with postural kyphosis was to lay flat on the floor, with effort, they would be able to flatten their spine against the floor; if the condition was structural, this would not be the case.

As postural kyphosis is caused by poor posture, rather than a structural abnormality within the spine itself, this is the simplest form to treat.

Common treatment would involve education on the merits of proper posture, correcting bad habits such as slouching, looking down at devices for long periods of time, and increasing core strength so the spine is optimally supported and stabilized.

Unlike postural kyphosis, Scheuermann’s can be more problematic and complex to treat.

Named after the radiologist who first described the condition, Scheuermann’s kyphosis is caused by a structural abnormality within the spine itself.

This form of kyphosis is most prevalent in adolescents and affects boys more than girls.

Unlike the flexible curves of postural kyphosis, the curves in Scheuermann’s are rigid, which is why changing position won’t alter the curve.

While every case is different, it can be painful, particularly during long periods of activity, standing, or sitting.

As mentioned, because Scheuermann’s is structural, treatment is more complex.

While treatment results can never be guaranteed, here at the Scoliosis Reduction Center, I’ve treated many different types of structural spinal conditions.

Through a conservative treatment approach that combines multiple treatment disciplines such as kyphosis-specific chiropractic care, in-office therapy, custom-prescribed home exercises, and corrective bracing, I can impact the condition on a structural level in the form of a curvature reduction.

I then work towards increasing core strength so the muscles and ligaments that surround the spine can optimally support and stabilize it.

Like Scheuermann’s, congenital kyphosis is also structural and more complex to treat. 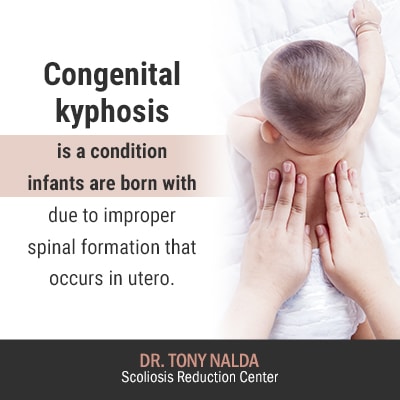 Congenital kyphosis is a condition infants are born with due to improper spinal formation that occurs in utero.

Congenital kyphosis can progress with age and growth, so being proactive to try and stay ahead of the curvature’s tendency to worsen with growth is key.

In cases of congenital kyphosis, it’s not uncommon to have other birth defects present, which warrants full examination, assessment, and close monitoring.

There are unique challenges to treating congenital kyphosis because of patient age, so treatment plans I might use with older children have to be modified to address the specifics of treating younger patients and a spine with more growth to go through.

Treatment can include kyphosis-specific chiropractic care, a variety of therapies, and in some cases, corrective bracing.

While there is a normal curvature-degree range in healthy spines, when one or more of those healthy curves move beyond that normal range, problems can develop.

If a person has an excessive upper-back curvature that gives them a pitched-forward roundback appearance, this can be caused by thoracic kyphosis.

As is the case with many spinal conditions, there are different forms of kyphosis, each with its own causation and treatment needs: postural, Scheuermann’s, and congenital being the main three.

While postural is the most common and the simplest to treat, Scheuermann’s and congenital kyphosis are structural conditions caused by a structural abnormality within the spine itself, which makes treatment more complex.

Here at the Scoliosis Reduction Center, while my speciality is scoliosis, I have a vast amount of experience treating a wide range of additional spinal conditions, kyphosis being one of them.

When it comes to reversing thoracic kyphosis, I work towards this by, first and foremost, impacting the condition on a structural level with kyphosis-specific chiropractic care.

Then I work closely with patients to increase core strength so the spine is strengthened and optimally supported and stabilized by stronger surrounding muscles and ligaments. When appropriate, I also prescribe corrective bracing as this can help augment treatment and achieve corrective results.

If you or someone you care about is experiencing, what appears to be, an abnormal spinal curvature, the time to seek guidance and treatment is always now. Early detection can increase chances of treatment success with many spinal conditions, including thoracic kyphosis.