Scheuermann's Kyphosis - What Is It & How To Treat It

There are different curvature types that characterize each of the spine’s main sections. Lordosis refers to spinal curves that bend backward, while kyphosis references spinal curves that bend forward. While there is a normal range of lordotic and kyphotic curves, problems can occur when a curve falls beyond that normal range. While there are different types of kyphosis, Scheuermann’s can be the most complex to treat because it is structural.

Let’s start our discussion of Scheuermann’s kyphosis by first touching on the difference between normal and healthy kyphotic curves and excessive kyphosis.

What is Scheuermann’s Kyphosis Curve?

As mentioned, there are two main curvature types that characterize the cervical (neck), thoracic (middle/upper back), and lumbar (lower back) sections of the spine.

The cervical and lumbar spinal sections have lordotic curves, meaning curves that bend backward, while the thoracic spine features a kyphotic curve that bends forward.

As also mentioned, within healthy spines, there is a natural range of lordosis and kyphosis, but when a curvature degree falls beyond that normal range, problems occur as the spine is no longer optimally aligned.

Kyphosis of the thoracic spine has a normal range of between 20 and 45 degrees, with 50+ generally considered hyperkyphosis: too much kyphosis causing excessive rounding of the upper back’s forward curvature.

As is the case with many spinal conditions, there are different forms of kyphosis with varying causation and related symptoms.

The three primary types of kyphosis are postural, congenital, and Scheuermann’s.

So to further specify, a Scheuermann’s kyphosis curve is an excessive forward-rounding of the upper back caused by a structural abnormality within the spine itself.

Let’s start our discussion of the primary forms of kyphosis with the most prevalent: postural kyphosis.

Postural kyphosis is the most prevalent type of kyphosis and is most commonly diagnosed during adolescence.

The condition often presents as poor posture with the classic adolescent slouch. As this type is not structural, it is the easiest to treat.

Postural kyphosis is caused by poor body positioning, which is why it’s not permanent, and a change in position can correct the unnatural kyphosis.

Postural kyphosis is most commonly diagnosed in female adolescents, is not progressive, and is rarely painful.

Treatment for postural kyphosis would include education on the importance of good posture and custom-prescribed condition-specific exercises for improving posture and body positioning and increasing abdominal and back muscle strength.

While postural kyphosis develops as the body’s exposed to chronic poor posture, congenital kyphosis is a form infants are born with.

Infants are born with congenital kyphosis as it develops in utero due to issues with spinal column formation.

As mentioned, Scheuermann’s kyphosis is a structural condition caused by a structural abnormality within the spine, which makes it more complex to treat.

Healthy vertebrae are rectangular-shaped, but in people with Scheuermann’s, an X-ray image will reveal multiple consecutive vertebrae to be triangular in shape instead. When vertebrae are misshapen in this way, it affects the spine’s ability to maintain its natural curvatures and alignment.

In addition, as triangular vertebrae become wedged together towards the front of the spine, it causes a loss of disc space and the condition’s characteristic roundback appearance.

While Scheuermann’s kyphosis most commonly affects the thoracic spine, it can also affect the lumbar spine.

As a structural spinal condition, if left untreated, Scheuermann’s kyphosis is likely to increase in severity.

Like postural kyphosis, Scheuermann’s is most commonly diagnosed during adolescence but is more common in boys and tends to progress with growth. 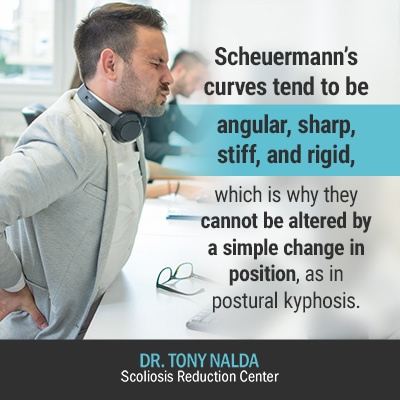 Scheuermann’s curves tend to be angular, sharp, stiff, and rigid, which is why they cannot be altered by a simple change in position, as in postural kyphosis.

For children and adolescents, which are the age groups most affected by Scheuermann’s kyphosis. The condition is not typically painful because they have not yet reached skeletal maturity; adults with Scheuermann’s, however, can find the condition painful, with the most-intense pain felt at the curvature’s apex (site of the most-tilted vertebrae).

In adults, hyperkyphosis-related pain tends to worsen during movement or while sitting/standing for long periods of time.

In addition, while Scheuermann’s kyphosis most commonly affects the thoracic spine, it also affects the lower back as the lumbar spine can respond to the presence of an unnatural curve above by putting in a compensatory curve below, which can also cause lower back pain.

Now that we have defined Scheuermann’s kyphosis and discussed its important characteristics and symptoms, let's talk about treatment options.

When it comes to treatment for Scheuermann’s kyphosis, the most important thing to remember is that as a structural condition, it won’t get better on its own. If left untreated, it’s likely to increase in severity, particularly in young patients who have not yet reached skeletal maturity.

As a structural condition, effective treatment for Scheuermann’s kyphosis has to impact the spine on a structural level.

As cases vary in severity, treatment needs to be customized to address key patient/condition characteristics for specific results. The first step of treatment is assessing if a patient’s kyphosis is progressing and at what rate.

At the Scoliosis Reduction Center, monitoring is only one aspect of proactive treatment because solely observing a condition's progression wastes valuable treatment time.

While there are no treatment guarantees, as a scoliosis chiropractor, I have years of experience treating a number of spinal conditions, Scheuermann’s kyphosis included.

Through a functional chiropractic-centered treatment approach that combines multiple forms of treatment, I can impact the condition on multiple levels.

While each case is unique, in general, my treatment plans for Scheuermann’s kyphosis include in-office therapy with condition-specific exercises to help strengthen the spine and its surrounding muscles, which is important in terms of spinal support.

In addition, increasing core and back strength takes the pressure off the spine as the muscles can help stabilize it and keep the back and its surrounding muscles as loose and flexible as possible. Condition-specific chiropractic care can help adjust and remodel the most-tilted vertebrae of the curvature into a better alignment with the rest of the spine: restoring healthy spinal curves for improved function and biomechanics.

Particularly in young patients, corrective bracing can also play a role in treatment. When children and adolescents wear a corrective brace consistently as prescribed, corrective results can be achieved by remodeling and correcting the growth of developing spines. 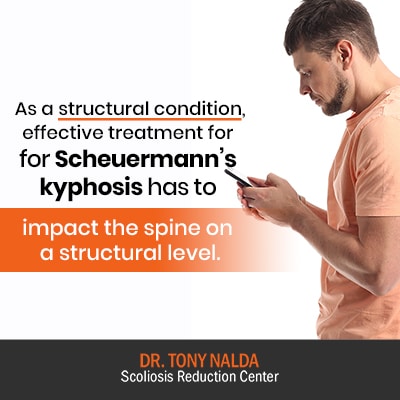 I can also integrate the use of a traction chair in treatment, which uses vibrations to help stretch and relax important muscles, and over time, this can help restore some of the lost natural spinal curves.

The use of highly-specialized cantilevers and weights can also help achieve a more balanced and neutral body position and posture, which reduces the uneven force and pressure caused by an abnormal spinal curve.

While corrective results are not always easy or quick to achieve, by crafting a comprehensive customized treatment plan and committing to it, patients can experience overall spinal health and function improvements: addressing the underlying cause of condition-related symptoms.

In severe cases, surgery can be recommended.

While no surgical procedure comes without its share of risks, spinal surgeries can come with particularly high potential risks and side effects.

In most cases, surgery is considered if the kyphosis is 75+ degrees, and not for cosmetic reasons, as the risks of working on and around the spine are high, particularly when it comes to nerve damage.

While there are different types of surgeries for treating Scheuermann’s kyphosis, typically, it’s a spinal fusion that’s performed.

The surgery will have two main parts: one that’s performed on the back of the spine and the other on the front. This is due to the rigidity of kyphotic curves necessitating an anterior and posterior fusion approach.

The procedure involves the fusing of multiple vertebrae into one solid bone; this is done to eliminate movement (progression) in the curvature’s most-tilted vertebrae, and the hardware is attached to the spine to hold it in place throughout the fusion process.

Again, while surgeons have their patients’ best interests at heart and there are always risks involved with any surgical procedure, spinal surgeries can be particularly risky because they involve working near the spine and spinal cord, which houses important nerves.

Fortunately, there are less-invasive treatment options available, such as those offered here at the Center, that can prevent increasing condition severity and the need for an invasive surgical procedure.

Being proactive is key when caring for the spine and treating structural spinal conditions, like Scheuermann’s kyphosis.

While there are no treatment guarantees, here at the Scoliosis Reduction Center, I offer patients a functional chiropractic-centered approach that combines multiple forms of treatment for the most customized results.

By combining corrective bracing (in younger patients), therapeutic exercise, and chiropractic care, these disciplines can be apportioned in such a way that they complement each other and augment corrective results.

As a structural condition, first and foremost, Scheuermann’s kyphosis has to be impacted on a structural level, and I work towards this through precise and gentle chiropractic adjustments/remodeling that encourage the realignment of the most-tilted vertebrae of the kyphotic curve.

In patients who have not yet reached skeletal maturity, corrective bracing can help support, stabilize, and realign the spine, and for adults with Scheuermann’s, when necessary, bracing can be used for spinal support/stabilization and pain relief.

Therapeutic condition-specific exercises can help engage parts of the brain to improve brain-body communication and achieve better body positioning and posture, not to mention increase core strength so the muscles surrounding the spine can support it optimally, taking pressure off the vertebrae and intervertebral discs.

When it comes to preserving spinal health and function, don’t hesitate to reach out for guidance if you, or a loved one, is experiencing any form of back pain and/or postural changes.

While early detection of Scheuerman’s kyphosis can’t guarantee positive treatment results, it does increase the likelihood by impacting conditions on a structural level and preventing increasing condition severity.