Reversal of Cervical Lordosis: What Is It? What Causes It?

In a healthy spine, the neck has a gentle lordotic curve, meaning it bends forward towards the body’s center. Cervical lordosis is important because the neck has to support the weight of the head. A loss of cervical lordosis can cause an unnaturally straight neck, or it can involve a reversal, where the neck’s curve bends in the wrong direction, becoming more kyphotic than lordotic.

Cervical lordosis refers to the natural C-shaped curvature of the neck, which is the bridge between the brain and the rest of the body. When the vertebrae in the neck bend in the wrong direction, it is considered to be a reversal of cervical lordosis and is associated with a variety of causes.

The neck is indispensable to overall health. As mentioned, it forms the bridge between the brain and the rest of the body.

As the spine works in tandem with the brain to form the body’s central nervous system (CNS), spinal conditions have the potential to cause issues throughout the body, and not just in the back.

Optimal health depends upon the brain-body connection and signals getting through to all organs and systems of the body.

The cervical spine in the neck consists of the first 7 spinal vertebrae (bones of the spine), and when healthy, it’s shaped like a wide ‘C’ with the curve facing forward.

The cervical spine’s natural lordosis (forward-facing curvature) allows the neck to support the weight of the head and provides a range of motion in the neck, but what does it mean to have a reversal of cervical lordosis?

What is Reversal of Cervical Lordosis?

While cervical lordosis has a healthy curvature-degree range of between 31 and 40 degrees, if that range falls beyond a normal level as the curvature is lost, the neck starts to straighten out and problems can occur.

When the curve flattens out, often referred to as military neck, a condition called hypolordosis can be to blame, and when the cervical curve faces the wrong direction, this is known as a reverse curve or a reversal of cervical lordosis.

The spine’s natural curvatures make it stronger, more flexible, and better able to absorb and distribute mechanical stress, so when a natural curve is lost, it doesn’t just affect that one area of the spine, but disrupts the entire spine’s biomechanics.

There are different causes for a loss/reversal of cervical lordosis.

What Causes Reversal of Cervical Lordosis? 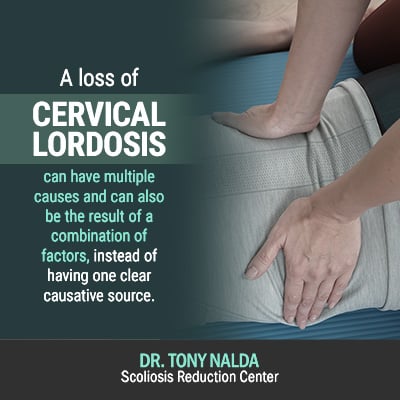 A loss of cervical lordosis can have multiple causes and can also be the result of a combination of factors, instead of having one clear causative source.

Accidents, injuries, and repeated postural issues such as constantly looking down at devices can put a strain on the body, and over time, can lead to cervical-lordosis issues.

It can be surprising, but just a forward-shift in posture as little as an inch at the cervical level can increase the weight of the head on the neck, shoulders, and supportive muscles exponentially, known as forward head posture.

The extra weight, over time, can pull the entire spine out of alignment, causing tension headaches, tight upper back/shoulder muscles, and neck pain.

In addition, a variety of spinal conditions can also lead to a loss of cervical lordosis, such as hypolordosis, hyperlordosis, hyperkyphosis, osteoporosis, and scoliosis.

When spinal conditions that involve a loss of the spine’s healthy curvatures develop, it’s not unusual for the spine to put in compensatory curves. For example, if a person has hyperkyphosis of the lumbar spine, the cervical spine can develop a hyperlordotic curve to try and counteract the abnormal spinal curve in the lower spine.

Structural spinal conditions like scoliosis introduce many uneven forces to the body that cause unnatural spinal curves to develop, which can lead to a loss of cervical lordosis.

Conditions that weaken the spine, such as osteoporosis, can lead to fractures and intervertebral disc issues that impair the spine’s ability to maintain its healthy curvatures.

If a person has pre-existing damage to the spinal ligaments or discs caused by a condition, trauma, or accident, the spine is particularly vulnerable to losing its natural and healthy curves/alignment.

Is Reversal of Cervical Lordosis Serious?

To reiterate, a reversal of cervical lordosis occurs when the cervical spine’s vertebrae bend in the wrong direction.

The cervical spine has a natural lordotic curve, but if it reverses and starts to bend outwards, it becomes more kyphotic than lordotic.

How to Fix Loss of Cervical Lordosis

Here at the Scoliosis Reduction Center, I use a chiropractic-centered conservative treatment approach that integrates a number of treatment disciplines for better treatment efficacy and a truly customized approach. 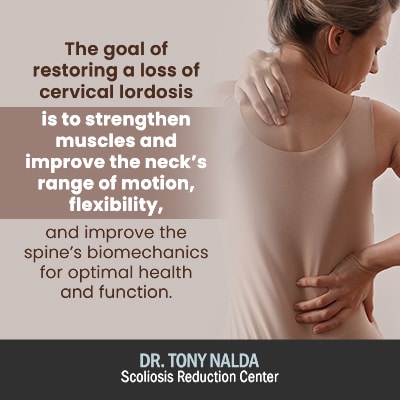 The goal of restoring a loss of cervical lordosis is to strengthen muscles and improve the neck’s range of motion, flexibility, and improve the spine’s biomechanics for optimal health and function.

To restore a loss of cervical lordosis, its underlying cause has to be addressed. If it’s related to posture and/or obesity, those are lifestyle issues that can be corrected.

If a spinal injury or trauma has weakened the spine and caused the loss of cervical lordosis, the injury has to be treated proactively in order to improve the spine’s health, strength, and function.

When a spinal condition such as hypokyphosis, scoliosis, or osteoporosis is the cause, those conditions have to be the guiding force of the treatment. As they are impacted on a structural level, related symptoms are addressed/alleviated as the spine’s vertebrae are adjusted back into a healthier alignment with the rest of the spine.

Here at the Center, I combine precise chiropractic adjustments, therapies, and exercises, so they work together to relax certain muscles, reposition vertebrae, and activate certain areas of the brain that affect balance, posture, and coordination.

Spinal weights can be effective at inducing neurological retraining, and soft-tissue remodeling focuses on restoring, relaxing, and rehabilitating the ligaments in the neck for better support.

Through taking an X-ray at the onset and completion of treatment, I can see how the spine has responded to treatment and whether or not the cervical spine has been impacted on a structural level.

When it comes to the spine, in order for it to perform optimally, it has to be able to maintain its natural curvatures and alignment.

The spine has three main sections: lumbar (lower back), thoracic (middle/upper back), and cervical (neck).

As each section has its own characteristic curvature type and size range, you can likely imagine how one section developing an unnatural curve would residually affect the spine’s other curvatures, which is why one unhealthy curve disrupts the biomechanics of the entire spine.

A loss of cervical lordosis is when the neck becomes unnaturally straight, known as military neck caused by a forward head posture, and can also involve when the neck’s natural lordosis reverses into kyphosis. In other words, the cervical spine that’s supposed to bend inwards reverses and bends outwards instead.

With multiple causes ranging from obesity and bad posture to spinal injury, trauma, disease, or the presence of other spinal conditions, effective treatment will depend on the factors that led to the loss of cervical lordosis.

If you, or someone you care about, are experiencing unexplained neck and shoulder pain and/or noticing a reduced range of motion in the neck, it could result from losing the neck’s healthy curve.

Here at the Scoliosis Reduction Center, patients experiencing a loss of cervical lordosis will be assessed, diagnosed, and treated proactively.

Through combining various treatment disciplines such as condition-specific chiropractic care, in-office therapy, custom-prescribed at-home exercises, and corrective bracing, we can work towards restoring as much of the neck’s natural curve as possible, thus improving the spine’s overall health, function and improving the brain-body connection.