Normal Curvature of the Spine: What is a Normal Spine Curve?

The spine has its own natural and healthy curves that help it stay aligned and function optimally. There are a number of spinal conditions that involve a loss of the spine’s healthy curves, such as scoliosis. Keep reading to also learn about the spine’s normal degrees of lordosis and kyphosis.

The spine’s natural curves make it stronger, more flexible, and better able to absorb/distribute mechanical stress. Each of the spine’s three sections has its own healthy range of curvature degree, but when a curve falls beyond a healthy range, problems can occur that impact the entire spine.

Let’s start our discussion of the spine’s normal curves by exploring some basic spinal anatomy.

Anatomy of a Healthy Spine

As mentioned, these natural curves make the spine stronger, enable its flexibility/range of motion, and help it to absorb stress from impact and movement. 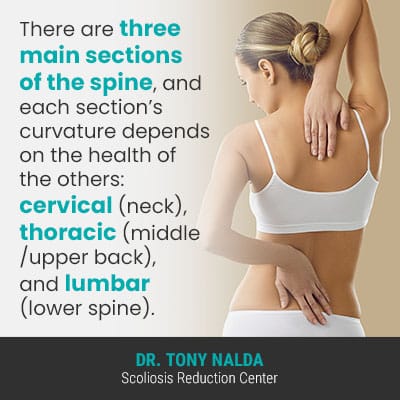 There are three main sections of the spine, and each section’s curvature depends on the health of the others: cervical (neck), thoracic (middle/upper back), and lumbar (lower spine).

Lordosis involves the cervical and lumbar sections, while kyphosis characterizes the thoracic spine. If the spine’s natural lordosis and kyphosis fall beyond a normal range, these curves become exaggerated and disrupt the spine’s overall function and biomechanics, known as hyperlordosis and hyperkyphosis.

As you can see, the spine’s healthy curves still have a significant size range, and it’s when a person’s spinal curves fall beyond a normal range that problems can occur.

There are numerous additional spinal conditions that involve a loss of the spine’s healthy curves, such as scoliosis: the most prevalent spinal condition amongst school-aged children in the United States.

In fact, scoliosis is more common than most people realize with the National Scoliosis Foundation putting current estimates of people living with scoliosis in the States to be close to 7 million.

If the spine develops an unnatural sideways curve, this can be diagnosed as scoliosis, but certain parameters have to be met to reach a scoliosis diagnosis.

Scoliosis involves the development of an unnatural sideways spinal curve (a curve that bends to the side), but in addition, a scoliotic curve also has a rotational component, making it a 3-dimensional condition as the spine not only bends unnaturally to the side, but also twists from front to back, back to front.

In order to reach a scoliosis diagnosis, the unnatural spinal curve also has to be of a certain size.

A measurement known as Cobb angle is regarded as the orthopedic gold standard in the assessment of scoliosis and tells me how far out of alignment a scoliotic spine is; it also places conditions on a severity scale of mild to moderate and severe to very severe:

In addition to the rotational component, 10 degrees was the decided cut-off point for scoliosis to regulate the diagnostic process and distinguish between a normal sideways spine curve and a scoliotic spine curve.

So what are some other important characteristics of scoliosis?

What Are The 4 Main Types of Scoliosis?

Scoliosis is progressive, meaning it has it in its very nature to worsen over time, particularly if left untreated, or not treated proactively.

There are also different types of scoliosis. Idiopathic scoliosis is the most prevalent form, accounting for approximately 80 percent of known diagnosed cases.

The idiopathic designation means not clearly associated with a single-known cause; idiopathic scoliosis is thought to be multifactorial, meaning caused by multiple factors that can vary from patient to patient.

While scoliosis can affect all ages, the condition’s most-prevalent form is adolescent idiopathic scoliosis (AIS), diagnosed between the ages of 10 and 18.

Although we don't fully understand the etiology of idiopathic scoliosis, we do understand its trigger for progression: growth and development.

So we know that children and adolescents who have not yet reached skeletal maturity are at risk for rapid-phase progression, and effective treatment has to work towards counteracting the condition’s progressive nature. 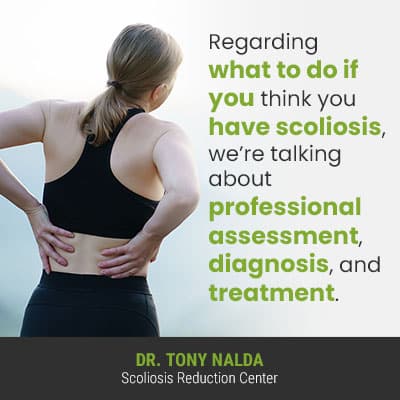 Regarding what to do if you think you have scoliosis, we’re talking about professional assessment, diagnosis, and treatment.

The first step to proactive treatment is recognizing the condition’s early signs and understanding how an abnormal spinal curve can affect the spine and its surroundings.

When the spine has an unnatural curve, it doesn’t just affect the spine itself, but also its surrounding muscles and nerves.

The spine’s surrounding muscles help it remain aligned by providing it with support and stabilization. If a scoliotic curve develops, the surrounding muscles struggle to support the unnaturally-curved spine, often becoming strained, stiff, and sore as a result.

As the spine works in tandem with the brain to form the body’s central nervous system, spinal nerves can also be impacted as they’re exposed to uneven forces and compression, known to cause radicular pain felt throughout the body.

While there are no treatment guarantees, early detection can increase the chances of treatment success as it’s less complex to treat a curvature while mild. Before progression has occurred, spinal rigidity has increased, and before the body has had time to adjust to the unnatural curve’s presence.

One of the main goals of treatment here at the Scoliosis Reduction Center is to apply proactive treatment as close to the time of diagnosis as possible to prevent increasing condition severity, escalating symptoms, and the need for invasive treatment in the future.

In the condition’s most-prevalent form, adolescent idiopathic scoliosis, its earliest signs are related to the uneven forces the condition introduces to the body: postural deviation.

Scoliosis disrupts the body’s overall symmetry, and while each case is unique, some common signs of AIS include:

As a result of the disruption to the body’s overall symmetry, clothing can become ill-fitting, and related changes to gait, balance, and coordination can also occur.

So if you notice any of the aforementioned postural changes, it’s possible that a normal spine curve has been replaced by a scoliotic curve in need of proactive treatment that works towards restoring as much of the spine’s normal curves as possible.

A healthy spine is important for providing the body with a structure, supporting the weight of the trunk, facilitating flexible movement, protecting organs, working with the brain to form the central nervous system, and allowing us to stand upright and practice good posture.

When the spine loses one or more of its normal and healthy curves, it disrupts the biomechanics of the entire spine; this is because the integrity of each spinal curve is dependent upon the health of the others.

The spine’s normal curves make it stronger and allow it to function optimally; if an abnormal spinal curve develops, this can involve a misaligned spine and be the result of a number of spinal conditions such as hyperlordosis, hyperkyphosis, and scoliosis.

While hyperlordosis and hyperkyphosis involve the spine’s normal forward and backward curves, scoliosis involves the development of an unnatural sideways spinal curve that involves rotation.

If you, or a loved one, suspects the development of an abnormal spinal curve, the first step is seeking out a professional assessment that can lead to a diagnosis, proactive treatment, and restoring as much of the spine’s normal curves as possible.