Scoliosis is a structural spinal condition that involves a loss of its healthy curves, which are key to maintaining optimal spinal health and function. As the spine works in tandem with the brain to form the body’s central nervous system, the effects of spinal conditions, like scoliosis, can be felt throughout the body; only proactive treatment can minimize those effects.

Before getting to the specifics of how to treat scoliosis, let’s explore some important condition characteristics because they shape the crafting of effective treatment plans.

Scoliosis is a structural spinal condition that involves a loss of its healthy curves due to the development of unhealthy curves.

Scoliosis is an unnatural sideways spinal curve with rotation, and a minimum Cobb angle measurement of 10 degrees; these are the parameters that have to be met to reach a diagnosis of scoliosis.

A patient’s Cobb angle is a measurement taken during an X-ray that places conditions on a severity scale of mild to moderate and severe to very severe: 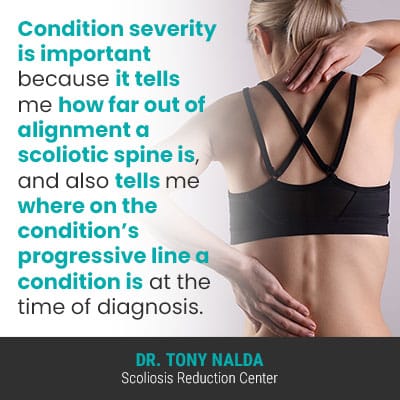 Condition severity is important because it tells me how far out of alignment a scoliotic spine is, and also tells me where on the condition’s progressive line a condition is at the time of diagnosis.

As a progressive condition, scoliosis has it in its nature to get worse over time, especially if left untreated or not treated proactively.

Even scoliosis diagnosed as mild can progress to moderate, severe, or very severe, so where scoliosis is at the time of diagnosis is not indicative of where it will stay.

Scoliosis can affect all ages, but is most prevalent in adolescents between the ages of 10 and 18: adolescent idiopathic scoliosis (AIS).

So now that we have covered some important characteristics of scoliosis in our definition of the condition let’s move on to addressing treatment options.

Fortunately for Pensacola residents, Florida state is also home to one of the country’s top scoliosis chiropractors; Dr. Tony Nalda and his Scoliosis Reduction Center of the Celebration, Orlando area, is only an approximate 466 miles and a 7-hour drive away.

The traditional scoliosis treatment approach is one that has been in place for hundreds of years, but it has changed little over those years, despite our growing understanding of the condition and how it responds to treatment.

A traditional approach is commonly described as reactive, and this is because it does nothing to prevent increasing condition severity while a condition is mild: when it’s going to be the most responsive to treatment.

An adolescent with mild scoliosis would often be told to simply watch for signs of further progression and return at periodic intervals for assessment.

Depending on the individual case and treatment provider, those intervals can range from every 3, 6, to 12 months.

Now, although the idiopathic designation in AIS means we don’t fully understand what caused it to develop, we do know what triggers it to get worse: growth and development.

Adolescents are in, or are entering into, the stage of puberty, so what commonly occurs is adolescents have a significant growth spurt and progress because of it. In between assessments and when they return for treatment, their condition has gotten significantly worse, complicating the treatment process.

The issue with this is that had proactive treatment been applied while the condition was still mild, it could have been enough to counteract the condition’s progressive nature and prevent it from getting worse.

The only type of treatment a traditional approach applies is traditional bracing, like the Boston brace, which is limited in its efficacy, before recommending spinal fusion surgery once the patient continues to progress and crosses the surgical-level threshold at 40+ degrees.

Spinal fusion has its place in scoliosis treatment but is a costly and invasive procedure that comes with heavy potential risks and side effects: commonly costing the spine in terms of function with a loss of spinal flexibility and range of motion.

Also known as functional or chiropractic-centered, a modern conservative treatment approach values a proactive response to a diagnosis, and nonsurgical treatment strives to preserve as much of the spine’s natural function and range of motion as possible.

Here in Celebration, Orlando, Florida, I’ve built my Center out of a desire to not only treat scoliosis non-surgically but also to spread awareness on the accessibility of non-surgical treatment options.

So for residents of the Pensacola area, a non-surgical conservative scoliosis treatment approach is a mere 466 miles away, and while a 7-hour drive might sound like a long journey, considering the far-reaching effects that scoliosis treatment can have, it could be more than worth the travel time and effort.

If I have a mild scoliosis patient, I look at this as an opportunity to impact the condition early when there are fewer limits to what we can achieve.

As progression occurs, the scoliotic curve increases in size and the uneven forces being introduced to the body are also increasing, and this increases spinal rigidity: making the spine less responsive to treatment.

In addition, a large part of my integrative treatment approach is using scoliosis-specific physical therapy and exercises to increase core strength so the spine is optimally supported and stabilized. Also, certain scoliosis-specific exercises (SSEs) activate areas of the brain for improved brain-body communication, postural remodeling, and a more natural body positioning.

In addition to in-office therapy and custom-prescribed SSEs, I use condition-specific chiropractic care to, first and foremost, impact the condition on a structural level, and corrective bracing to augment corrective results achieved through the combination of multiple treatment modalities.

Unlike the traditional Boston brace, I favor the modern ultra-corrective ScoliBrace to meet my patients’ bracing needs as it not only addresses many of the shortcomings associated with traditional bracing but can also help achieve corrective results.

When it comes to treatment options, there are two main scoliosis treatment approaches for patients to choose between: traditional and conservative.

The traditional scoliosis treatment approach is considered reactive because it does little to prevent progression due to focusing more on monitoring for progression. As a result, it tends to funnel patients toward spinal fusion surgery.

The modern conservative scoliosis treatment approach features a proactive response by initiating treatment as close to the time of diagnosis as possible in the interest of preventing further progression, reducing the curve on a structural level, and helping patients avoid surgery.

So for those looking for Pensacola area scoliosis treatment, although approximately 466 miles and a 7-hour drive away, contacting the Scoliosis Reduction Center can mean accessing industry-leading non-surgical scoliosis treatment.