Scoliosis can be a confusing condition to be diagnosed with, but it doesn’t have to be. While complex in its variability and etiology, once a person fully understands the various treatment-approach options, effective non-surgical treatment can be well within reach.

Before getting to the specifics of Miami's scoliosis treatment, let’s explore some important condition characteristics for a better understanding of the different treatment options available.

Scoliosis is a Progressive Condition

One of the reasons scoliosis is so often deemed complex or confusing is because of its progressive nature, meaning it’s virtually guaranteed to worsen at some point, particularly if left untreated or not treated proactively.

When I say worsen, I mean the unnatural sideways spinal curve will increase in size, and this is known as increasing condition severity: a key variable when it comes to the crafting of effective treatment plans.

A measurement known as the Cobb angle classifies conditions on a severity scale of mild, moderate, severe, or very severe:

A patient’s Cobb angle is obtained during X-ray and involves drawing intersecting lines from the tops and bottoms of the curve’s most-tilted vertebrae at its apex; the resulting angle is expressed in degrees.

The higher the Cobb angle, the more severe the condition, and the more likely it is to continue progressing.

As a progressive condition, where scoliosis is at the time of diagnosis is not indicative of where it will stay: only treatment outcome can determine that.

If a person is diagnosed with mild scoliosis, but the case is left untreated or not treated effectively, it can easily become moderate, severe, or even very severe.

The fact that scoliosis is so highly variable is yet another reason it can be a challenge to treat. Still, fortunately, there is more than one way to treat the complex condition, and for residents of Miami, Florida, a leading scoliosis-treatment center is a mere 3.5-hour drive away.

There are two main scoliosis treatment approaches to choose between: traditional and conservative.

The issue, however, is that as a progressive condition, we know that virtually every case is going to worsen at one time or another, so why not be proactive? 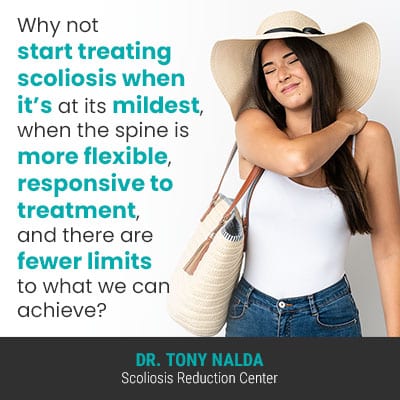 Why not apply proactive treatment early in the condition’s progressive line? Why not start treating scoliosis when it’s at its mildest, when the spine is more flexible, responsive to treatment, and there are fewer limits to what we can achieve?

The traditional response is to observe for progression by scheduling periodic assessments, but the risk is that progression can occur in between assessments, making it more difficult to treat as the scoliotic curve was left to progress unchecked.

In fact, the only form of treatment applied would be traditional bracing, which is associated with a number of shortfalls.

If a condition continues to progress, despite bracing, once it crosses into the severe classification at 40+ degrees, it’s approaching the surgical-level threshold when patients are frequently funneled towards a spinal-fusion recommendation.

In addition to spinal fusion being a costly and lengthy procedure, it also comes with its share of heavy potential risks and side effects and doesn’t preserve the spine’s natural function.

Fortunately, there is another non-surgical treatment option for scoliosis patients with proven results, and for those in the Miami, Florida area, it's only 3.5 hours away.

Here at the Scoliosis Reduction Center, in the Orlando area, I have patients coming to us from all over the world, so for those in Miami, Fl, traversing 228 miles puts proactive non-surgical scoliosis treatment within reach.

Unlike the traditional approach that values watching and waiting, I value proactive treatment started as close to the time of diagnosis as possible.

While there are no treatment guarantees, early detection comes with a number of treatment benefits, but only if the diagnosis is responded to with proactive treatment.

It’s simpler to treat scoliosis when the curve is smaller, before spinal rigidity has increased alongside progression, and before the body has had ample time to adjust to its presence.

For Center patients, I customize each treatment plan to impact the condition on multiple levels; first and foremost, as a structural condition, I want to impact it on a structural level in the form of a curvature reduction. 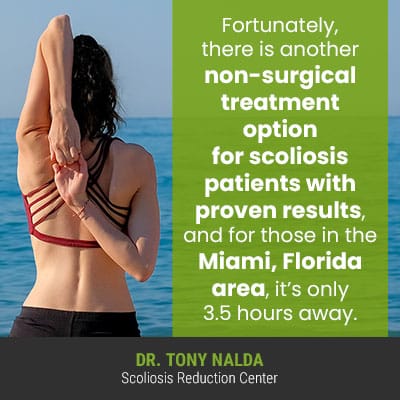 Because I’m certified in multiple condition-specific treatment modalities, patients of the Center have the benefit of accessing a wide variety of treatment disciplines and the advantages associated with each, under one roof.

By integrating chiropractic care, in-office therapy, custom-prescribed home exercises, and corrective bracing, I can help patients work towards a curvature reduction, while increasing core strength, so the spine is optimally stabilized and supported by its surrounding muscles.

I can complement corrective results achieved through other forms of treatment with corrective bracing that works by pushing the spine into a corrective position.

So for those in need of Miami scoliosis treatment, why not travel the 228 miles to the Scoliosis Reduction Center in Celebration, Orlando; people cross the globe in search of support, guidance, and treatment from one of the world’s leading scoliosis chiropractors, but for Miami residents, it’s a mere 3.5-hour drive.

Those in search of a less-invasive non-surgical scoliosis treatment approach shouldn’t hesitate to reach out as, particularly when it comes to progressive conditions, the best time to start treatment is always now.