How Serious is Scoliosis?

If you, or someone you love, has recently been diagnosed with scoliosis, it’s only natural to wonder just how serious scoliosis is. As the spine’s natural ‘S’ shape and healthy curves give it its strength and flexibility, a loss of these curves affects the overall biomechanics of the spine. Factors such as age and health of the patient, location of the curvature, and condition severity help shape a person’s experience of living with their condition.

When scoliosis is first diagnosed, the X-ray results tell me how severe a condition is, as well as most of the additional information needed to treat that condition. In addition to the information provided by the X-ray images, the patient’s medical history, age, and overall health are also taken into account. Before we move on to how the condition is classified on its severity scale, let’s first talk about what a scoliosis diagnosis means.

There are close to seven million people currently living with scoliosis in the United States, and it is the leading cause of deformity amongst school-aged children.

If a person is living with scoliosis, it means their spine abnormally bends to the side and coincides with rotation, which is why scoliosis is described as a 3-dimensional condition.

This rotation is the difference between a true scoliosis and a postural problem. Also, in order to be considered scoliosis, the curve has to measure at 10 degrees or more. The largest curvature I’ve seen measured 150 degrees, so you can see how much of a variance there would be from 10 to 150 degrees.

Scoliosis is a progressive condition with no known cure, meaning it’s in the condition’s nature to worsen over time. This is why proactive treatment, like the approach we offer here at the Scoliosis Reduction Center, is so important; the key to living your best life with scoliosis is staying ahead of its progression. 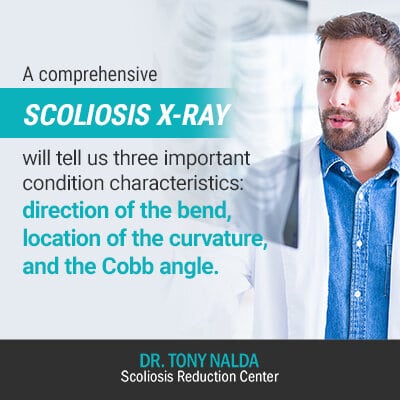 A comprehensive scoliosis X-ray will tell us three important condition characteristics: direction of the bend, location of the curvature, and the Cobb angle.

The information that the X-ray provides becomes the road map of treatment, telling us where our adjustment efforts need to be concentrated and just how severe the curvature is.

Direction of the Bend

In atypical scoliosis, this is a red flag that there is something more going on than just scoliosis. In these types of cases, I approach treatment differently as scoliosis is often a secondary complication of another medical issue.

Other pathologies that could account for a left-bending curve would be congenital scoliosis (caused by a bone malformation at birth), tumors pressing on the spine, or neuromuscular diseases such as spina bifida, cerebral palsy, or muscular dystrophy.

Location of the Curvature

Another important classification point for scoliosis is just where along the spine the scoliosis developed.

The spine consists of three main sections: cervical (upper back), thoracic (middle back), and lumbar (lower back).

While scoliosis can develop at any location along the spine, it’s most commonly found in the thoracic section.

Along with telling us where we need to focus our chiropractic adjustments, the location of the curvature also prepares us for certain symptoms and characteristics associated with scoliosis that develops in different sections of the spine.

This is the most common location for scoliosis. When scoliosis develops in the middle part of the spine, we know it’s likely to cause a rib deformity as well.

As the rib and spinal deformity worsens, we also expect to see asymmetries develop in the shoulders, arms, and legs.

Lumbar scoliosis develops in the spine’s lower section. It often causes one hip to sit higher than the other and gives the appearance of legs and arms hanging at different lengths.

In thoracolumbar scoliosis, as the name suggests, these types of curves include vertebrae from the lower thoracic region and upper lumbar sections of the spine.

Often in these types of cases, the cause is congenital or a secondary complication of neuromuscular conditions.

You might be wondering why cervical scoliosis hasn’t been given a section and that’s because it’s a rare condition that has not yet been well defined.

You can see how knowing where along the spine the scoliosis has developed gives us important information regarding likely symptoms, postural changes, and possible causes.

The next big classification point for scoliosis is the Cobb angle.

The most important information provided by the scoliosis X-ray is the Cobb angle. This is important because it helps us reach an official diagnosis and places the condition on the severity scale of mild, moderate, or severe.

The Cobb angle is a measurement of the most tilted vertebrae at the apex of the curve. If the curvature measures 10 degrees or more and coincides with rotation, this is considered true scoliosis.

The higher the patient’s Cobb angle, the more severe the condition is considered, and this tells us just how hard we’ll have to work to gain a correction and restore the spine’s healthy curves.

Severe Scoliosis: Cobb angle measurement of more than 40 degrees in adolescents and more than 50 in adults.

Combined with the age of the patient, the aforementioned characteristics classify the condition, determine how serious it is at the time of diagnosis, and inform our treatment approach.

While scoliosis can develop at any age, it’s most commonly diagnosed between the ages of 10 and 18, and this is classed as ‘adolescent idiopathic scoliosis’ (AIS). The vast majority of AIS cases have no known single cause, which is where the ‘idiopathic’ designation comes in.

When it comes to treating AIS, we monitor growth patterns to see how they affect progression, and we aim to reduce the curve as much as possible to realign the spine. 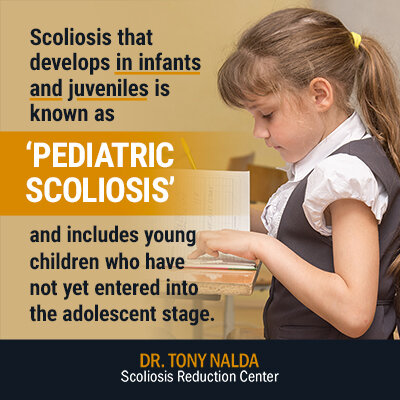 Scoliosis that develops in infants and juveniles is known as ‘pediatric scoliosis’ and includes young children who have not yet entered into the adolescent stage.

The condition in infants is mainly caused by a congenital defect, such as a bone malformation. While some data shows that mild cases of infantile scoliosis can sometimes resolve itself, there is no way to be sure whether a case will resolve on its own or progress, so treatment is still recommended, regardless of the condition’s severity.

When it comes to ‘juvenile scoliosis’, this involves cases diagnosed in children between the ages of 3 and 10. In juvenile scoliosis, we know that there is a very high risk of progression because these patients have the most growing to do, and one thing we know for certain about scoliosis is that in patients who have not yet reached skeletal maturity, growth is the biggest trigger for progression.

Again, this is why it’s so crucial to initiate proactive treatment so the condition is treated and managed before it progresses in severity and becomes more difficult to treat.

There are two main types of adult scoliosis: scoliosis that has been carried from adolescence and is not diagnosed until adulthood (the more common form) and adult de novo scoliosis, meaning the condition has developed fresh in adulthood with no prior history.

As mentioned earlier, growth is the big trigger for progression. What this means in cases of adult scoliosis is that as skeletal maturity has been reached, the condition will still progress, but tends to progress more slowly.

The reason why it’s not often until adulthood that cases of adolescent idiopathic scoliosis are diagnosed is because scoliosis has such a wide severity scale, and depending where on that scale a person’s condition falls, there can be numerous noticeable symptoms, or none at all.

When growth has stopped, the spine is vulnerable to the compressive forces of scoliosis felt in the spine, its surrounding muscles, and nerves; this pain is what brings most adults in to see me.

Scoliosis that develops later in life is often the result of degenerative changes to the spine that accompany aging.

Correcting a misalignment of the spine means restoring as much of the spine’s healthy curves as possible and improving the overall biomechanics of the spine.

When it comes to how serious scoliosis can be, you can see how much of a variance there is within the condition itself. Depending on age, condition cause (if known), type and size of curvature, a condition can be considered mild, moderate, or severe.

Regardless of what size a person’s curvature is at the time of diagnosis, as a progressive condition, it’s almost certain that curvatures will worsen over time if left untreated. If left untreated, the risk factors and potential complications of scoliosis increase exponentially, and in severe cases, in addition to postural changes, these can include lung impairment, sleep problems, pain, headaches, and digestive issues.

The single-best way to address any case of scoliosis is to actively treat it. There’s no harm in working to reduce a mild curvature before it progresses, but there most certainly is harm associated with leaving a curvature to progress on its own.

Obviously, a curvature that’s smaller is easier to treat for multiple reasons. Not only does a smaller curvature mean less intense levels of treatment, it also means the spine is more flexible and easier to manipulate into moving in the direction we want.

As a curvature gets more extreme, the spine gets more rigid and difficult to move.

So the big take-away here: get treatment at any age and at any stage of scoliosis. The best way to prevent a condition from becoming more severe, and minimize the risk of potential complications, is to actively treat it and stay ahead of its progression.