What is Thoracolumbar Scoliosis?

Basic anatomy of the spine divides it into three main sections: cervical, thoracic, and lumbar. If a person is diagnosed with ‘thoracolumbar’ scoliosis, this means their spinal curvature includes the thoracic and lumbar regions of the spine.

Scoliosis affects millions of people around the world and is defined as a sideways curvature of the spine, coupled with spinal rotation. As the spine bends, curves, and rotates in multiple directions, scoliosis is described as a 3-dimensional condition. Scoliosis can develop anywhere along the spine but is most common in the thoracic area (middle back).

Scoliosis is a complex condition that takes many forms, the most common being adolescent idiopathic scoliosis (AIS). This form of the condition accounts for 80 percent of diagnosed cases and has no known single cause.

While we don’t know what causes the vast majority of scoliosis cases, experts have found causes to the following forms of the condition: neuromuscular scoliosis, congenital scoliosis, degenerative scoliosis, and traumatic scoliosis.

As a progressive condition with no known cure, when it comes to treating patients with the condition, the focus is on how to manage its progression. As the nature of scoliosis is to worsen, staying ahead of the curve by counteracting that tendency with proactive treatment strategies is what we do best.

Here at the Scoliosis Reduction Center, every treatment plan is customized to address the condition severity and symptoms the patient is experiencing. This is particularly important when treating scoliosis because even within the same form of the condition, no two patients will experience it the same way.

In fact, in all my years of treating scoliosis, I’ve never used a treatment plan twice; a wide number of variables goes into deciding how to treat a condition such as age of the patient, physical fitness level and overall health, cause of the condition, degree and location of the curvature.

The spine is generally divided into three main sections: cervical (upper back), thoracic (middle back), and lumbar (lower back).

The three primary functions of the spine are to protect the spinal cord, provide the body with structural stability and balance, and to facilitate the body’s flexibility and mobility. 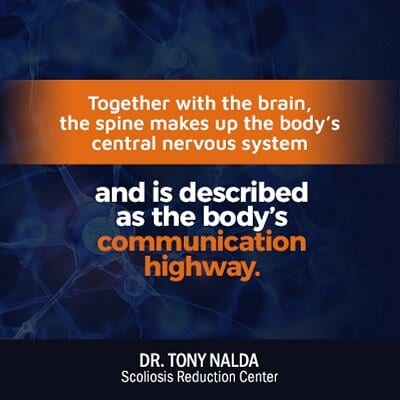 Together with the brain, the spine makes up the body’s central nervous system and is described as the body’s communication highway.

The nerves that run through the spinal canal allow the brain to communicate with the rest of the body.

The support and balance that the spine provides the body with is the reason we stand upright and can maintain good posture.

There are five healthy curves to the spine that give it its natural S-shaped curve.

If you were to view a healthy spine from the side, you would see it has an S-shaped curve. The five curves that give the spine its shape consist of the cervical, thoracic, lumbar, sacral and coccyx.

Together, the five healthy curves give the spine its flexibility and strength. Much like a coiled spring, the curves absorb force and make it much stronger than if it were straight. When those healthy natural curves are lost, it comes at the expense of strength and flexibility, and the body will often respond by introducing bad curves in an attempt to stabilize the imbalance.

If a patient’s curvature includes the lower-thoracic (middle back) and upper-lumbar (lower back) portions of the spine, it’s considered a combined scoliosis and is classified as ‘thoracolumbar scoliosis’. Terms such as ‘dextroscoliosis’ and ‘levoscoliosis’ refer to the direction of the curve: left or right.

What is Thoracolumbar Scoliosis?

Congenital scoliosis is evident at birth as the curve forms in gestation, usually at around the third to the sixth week; the condition is present in approximately 1 out of every 10,000 newborns.

If you picture the spinal cord and its vertebrae, the vertebrae are like bricks stacked on top of one another. In cases of congenital scoliosis, one of those bricks is shaped like a triangle, which causes the spine to shift and become misaligned.

There are different types of congenital scoliosis that develop for different reasons: vertebrae malformation, vertebrae fails to separate, and bars and hemivertebrae combined.

The spine forms before birth, and sometimes, a vertebra, or more than one, fails to form completely.

When this happens, the abnormality is called a hemivertebra and can create a sharp angle in the spine. As the child grows, that sharp angle can get worse.

In cases where there are more than one hemivertebra, they sometimes balance each other out to increase the spine’s stability.

Failure of the Vertebra to Separate

When a fetus is developing, the spine initially forms as a single column of tissue; later, that column separates into sections that form the bony vertebra.

If the separation process is incomplete, a partial fusion, also known as ‘boney bar’, can join multiple vertebrae together.

That bar prevents the child’s spine from growing on one side after they’re born, accounting for the spinal curvature that develops and progresses with growth.

The most severe form of congenital scoliosis is when the spine has a bar on one side and a hemivertebra on the other. This form causes serious growth problems and can progress rapidly. 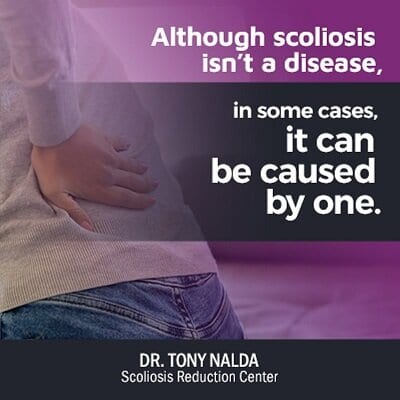 Although scoliosis isn’t a disease, in some cases, it can be caused by one.

Neuromuscular scoliosis most often develops in children and adolescents who have medical conditions that impair the body’s ability to control the muscles that provide the spine with support.

A spinal curvature develops when the back’s nerves and muscles are impaired and can’t maintain the spine and trunk’s alignment and balance.

In these cases, progression into adulthood is likely and can become more severe in patients who lose the ability to walk. People whose condition has confined them to a wheelchair tend to find it difficult to sit upright and slump to one side as a result.

In these types of cases, scoliosis develops as a secondary complication of a more serious condition such as muscular dystrophy, spina bifida, and cerebral palsy.

Here at the Scoliosis Reduction Center, we approach each and every patient with fresh eyes and a blank treatment plan. As assessments are done, measurements taken, and a comprehensive understanding of a patient’s condition is reached, we work with each patient to come up with the best possible treatment plan for the individual.

Not only does a treatment plan address the individual’s age and overall health and fitness level, it also addresses the condition’s cause, if it has one, the degree of curvature, and where along the spine the curvature developed.

In all forms of the condition, managing its progression is key. The main treatment priority is achieving a reduction, and once the condition is addressed structurally, we can open up that treatment strategy to include other areas such as exercise and diet.

Here at the Scoliosis Reduction Center, our patients have access to multiple forms of treatment in one convenient and accessible location. Regardless of how far advanced your condition may or may not be, or where the curvature is located along the spine, we have the experience and ingenuity to design a fully-customized treatment plan that can help you achieve a curvature reduction while maintaining the spine’s flexibility and function.