What to Expect After Scoliosis Surgery

What to expect after scoliosis surgery is difficult to predict as it’s based on a number of variables that differ from patient to patient and surgery to surgery. Based on my experience of treating patients after they’ve had spinal-fusion surgery, what to expect involves two timeframes: short- and long-term results.

I’ve seen the results of spinal-fusion surgery in a number of my patients. When it comes to what a person considering scoliosis surgery should expect, let’s first explore what those initial months following surgery might look like.

What to Expect in the Months Following Scoliosis Surgery

While there is no data on what patients should expect 10, 20, and 30 years after scoliosis surgery, there are some common outcomes that characterize the months immediately following the surgery.

On average, barring any complications, patients are released from the hospital within a week of their scoliosis surgery.

They often have to follow limited-activity restrictions while the vertebrae of the spine fully fuse. These restrictions can last for around six months, depending on the patient’s recovery.

Assuming those initial restrictions are followed and the patient is doing well and on track, they are generally released from those restrictions a year after the surgery.

Initially, most patients do well after scoliosis surgery, meaning they recover with their spine held in a corrective position. These positive results can last for several years with patients not experiencing noticeable side effects or risk factors related to their surgery.

It’s when we get to the long-term effects that the data is particularly unclear.

What to Expect in the Years Following Scoliosis Surgery

When it comes to how scoliosis surgery affects people in the long-term, nobody can accurately predict this. 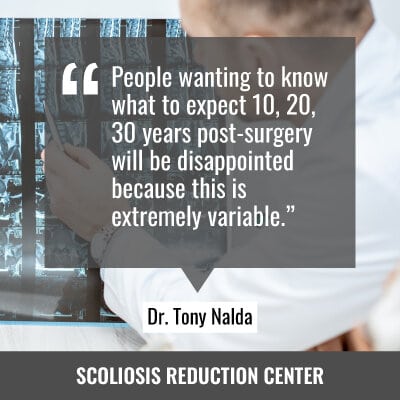 People wanting to know what to expect 10, 20, 30 years post-surgery will be disappointed because this is extremely variable. Some patients will do well, while others complain of pain and mobility issues.

From my perspective, and as a proponent of the conservative approach to scoliosis treatment, when I see patients post-surgery, it’s because they are having issues, which is why they’ve reached out to me.

The general consensus of doctors, surgeons, and scoliosis experts I’ve collaborated with estimate that scoliosis surgery has an average lifespan of 20 to 30 years. Within that 20- to 30-year period, patients are going to have issues related to that surgery, to varying degrees.

This is the case with any invasive surgery that relies on hardware in the body, such as knee or shoulder surgery.

In my opinion, these complications are often downplayed, especially with children who have had scoliosis surgery. The lifespan of rods, screws, hooks and wires is a crucial factor, but patients are often told, “Don’t worry about it. Once you have the surgery, you won’t have to worry about the hardware.” The truth is that this is often said because no doctor actually knows the long-term effects or the lifespan of the hardware used.

One common result post-surgery that studies have shown is that many patients are disappointed with the cosmetic results of the surgery. Many patients expect that in addition to having a straighter spine, they’re physical appearance will change and become more symmetrical.

The truth is that after surgery, many patients don’t look much different from how they looked prior to the surgery, and this often disappoints patients who come out of surgery still having a rib deformity or waste asymmetry.

The number-one reason people choose to have scoliosis surgery is cosmetic, so you can see how disappointing it would be to come out of surgery not looking markedly different than you did before.

This is where the argument regarding the merits of surgery comes in; if a patient isn’t in a large amount of pain, should they go through an invasive spinal surgery out of a desire to look differently, especially as it’s likely they will be disappointed with the results.

A patient would then have the disappointment of realizing they have undergone the surgery without the results they were looking for, while putting themselves at risk of a variety of complications related to the surgery.

When patients research what to expect after scoliosis surgery, a factor that’s often overlooked is the potential psychological effect of living with a rod attached to the spine.

When patients talk to me about this, I point out that life after surgery often entails a lot of unexpected changes. People often think they will be able to do everything they did before the surgery, or before they were diagnosed with scoliosis, but that’s not accurate.

What people should expect is that living with hardware attached to the spine has life-long consequences. You don’t just get spinal-fusion surgery and walk away from it to never think about it again.

There will need to be a lot of monitoring to ensure there are no surgical infections that develop, or failure of the hardware installed, and that the curvature isn’t continuing to progress, which it sometimes does.

Life post-surgery does involve limitations both in the short and long term. For example, a person with a fused spine could be adversely affected by an injury far more than someone living with scoliosis without a fused spine.

At any point after surgery, there is the risk of hardware failure such as rods breaking or screws coming loose. This equates to a life of concern over what a person’s fused spine can handle. People often find this worry to be an unexpected consequence of surgery that keeps them from trying new things or participating in activities they love. 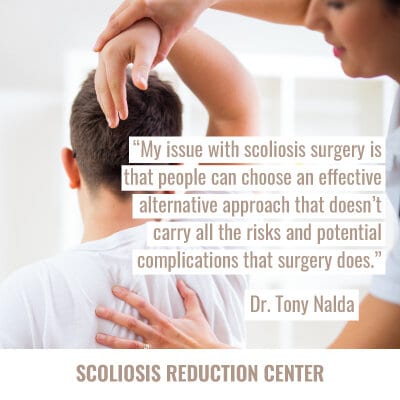 My issue with scoliosis surgery is that people can choose an effective alternative approach that doesn’t carry all the risks and potential complications that surgery does.

When it comes to scoliosis in the later stages of life, I’ve seen numerous patients with very large curvatures with very few, if any, limitations. Had those same people opted to have scoliosis surgery earlier in life, would they still be living a life without limitations, or would they be living a different type of life with limitations related to the surgery?

What I caution people with is that once you’ve had surgery, there’s no going back, and if you end up having complications, you’re likely going to need subsequent surgeries.

Here at the Scoliosis Reduction Center, the patients that come to see us post scoliosis surgery are reaching out because they are experiencing complications or side effects. This is hard to see because I can’t help but wonder where they would be if they had chosen a treatment path that didn’t involve surgery.

When we embark on a treatment path with a patient who has had scoliosis surgery, it’s always going to be marked, meaning a little uncertain. This is because there is such a large variance in the surgery itself.

Different surgeons use different techniques, have different hardware preferences, and the rod lengths can differ as well.

Depending on when a person had their surgery, older techniques and hardware could have been used, such as prior to the invention of the pedicle screw, and these variables can affect the outcome.

Basically, when it comes to treating patients who have had scoliosis surgery, our results are less predictable, and we have to really modify our treatment approach. That’s not to say we can’t get good results, but their treatment program will involve modifications to our adjustments, therapy, and recommended exercises.

The last thing we want to do is cause an additional complication because of introducing active treatment post-surgery, so we carefully modify our approach to ensure that doesn’t happen.

Answering the question of what to expect after scoliosis surgery is difficult because there is simply not enough data to include long-term effects.

Studies that have been done only extend five years beyond surgery, and even those studies aren’t 100-percent reliable. While there are some positive results of scoliosis surgery, when it comes to the long-term results, this is somewhat of a grey area.

Basically, there are a lot of opinions floating around regarding the efficacy of scoliosis surgery, but there is just not enough data to support many of them, especially when it comes to long-term results.

Here at the Scoliosis Reduction Center, we are dedicated to empowering our patients to make the best possible treatment choice by informing them of the risks and benefits of every treatment option that is available to them.