While scoliosis is more commonly diagnosed in children and adolescents, it also affects adults, and from idiopathic to traumatic, adults facing scoliosis need proactive treatment that understands the complexities of the condition and how to maintain reduction results.

Before we get to the scoliosis treatment success videos, let’s first talk generally about adult scoliosis.

As mentioned, scoliosis is often considered an adolescent condition, and that is because its most prevalent form is adolescent idiopathic scoliosis (AIS), diagnosed between the ages of 10 and 18.

Scoliosis has it in its very nature to worsen over time, particularly if left untreated or not treated proactively, so where a condition is at the time of diagnosis is not indicative of where it will stay, and a patient’s Cobb angle determines this.

Cobb angle is a measurement taken during an X-ray that tells me how far out of alignment a scoliotic spine is and places conditions on a severity scale:

Enjoy listening to the following adult scoliosis treatment success videos where patients share their experience with scoliosis and how nonsurgical treatment gave them hope for a brighter future.

Although Amber knew there was something different about her asymmetrical torso, she thought it was simply bad posture and was unaware that she had an actual medical condition. 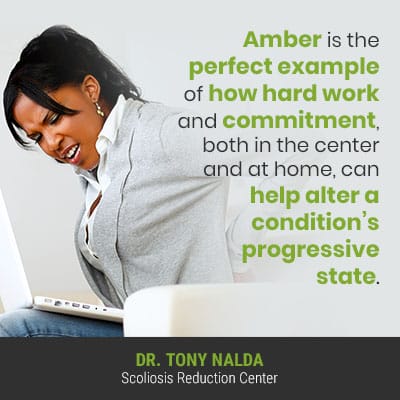 After learning what scoliosis was and doing her own due diligence, Amber’s research brought her to the Scoliosis Reduction Center.

When I see patients like Amber, the treatment goal is to reduce the curvature but also to sustain and hold that reduction. The patients themselves play a big role in that through their commitment to homecare and rehabilitation.

Through a series of chiropractic adjustments and scoliosis-specific exercises (SSEs), I was able to customize and coordinate a treatment plan that included in-office treatment to sustainable home care.

While it’s not always easy, Amber finds that doing her exercises every day to help stabilize the spine helps her stay on track, and after seeing that her curvature had reduced by 5 degrees in only four days of treatment, those results were highly motivating.

Next, the goal was to reduce another five degrees and then another.

Amber is the perfect example of how hard work and commitment, both in the center and at home, can help alter a condition’s progressive state.

Alisha was originally told she could have scoliosis during a routine screening exam performed when she was a junior in high school.

At the time, there was a lot of misinformation about scoliosis around, and no one seemed to be talking openly about it.

Alisha was referred to a specialist who diagnosed her with moderate scoliosis and a 35-degree curve.

The only treatment option Alisha was given was surgery, and she was told that spinal fusion could correct her scoliosis to approximately 50 percent, but that wasn’t good enough for Alisha.

After trying general chiropractic care for years, which helped with short-term results and pain management, Alisha really wanted a long-term solution that could help her be the type of mom she wanted to be: the kind of mom that could be active and keep up with her young children.

After receiving a referral to come see me at the Center, that’s exactly what we worked towards.

With adult scoliosis, while progression is slow, that rate of slow progression over time due to gravity which can make the condition increasingly painful because the spine and its surrounding muscles, nerves, and tissues are gradually being compressed over time.

And once natural age-related spinal degeneration comes into play, the condition can become even more painful.

While we can achieve a good retention rate with adults because growth isn’t triggering progression and counteracting treatment, work has to be done to sustain those results, and for patients like Alisha who are willing to commit to a therapy program that works to shift and straighten the spine, great strides can be made.

Thanks to Alisha’s hard work, in only ten days, we were able to reduce her curve from 43 degrees to 31.

Alisha was thankful to find someone that was even willing to talk about moving the spine, let alone a treatment provider who was able to do so non-surgically, and asserts that Dr. Tony’s success will surely change how chiropractic is viewed as a discipline.

Alisha considers her scoliosis experience a shining example to her children of how we all have to advocate for ourselves and look after our health so we can be the types of people we were meant to be.

As a motivational speaker, Eli wasn’t lacking drive when it came to his scoliosis, but guidance.

At the age of 20, Eli experienced a shoulder injury that led to the development of traumatic scoliosis.

Traumatic scoliosis is considered atypical because a trauma experienced by the spine causes it, and while most typical scoliotic curves bend to the right, away from the heart, Eli’s bent to the left, towards the heart.

After general chiropractic care fell short, Dr. Tony was recommended to Eli as one of the world’s leading scoliosis chiropractors.

This was right around the time that Covid hit, and with speaking events canceled, Eli saw it as the ideal time to finally face his scoliosis and see just what he could accomplish through a different treatment approach.

While progression immediately after a spinal trauma can be faster, at 43 years old, we were still able to achieve an impressive 50-percent reduction on Eli.

Thanks to the Center’s intense treatment protocols, Eli was able to reconnect to his body, get his life back on track, and continue motivating those around him.

Denise had been struggling with back pain for 20 years and went through numerous doctors telling her it was simply part of getting older.

As someone who had been active her entire life, she wouldn’t accept growing old as the reason behind her increasing back pain/issues.

After finally receiving a diagnosis of scoliosis, she decided she had waited long enough for an answer and was anxious to see what could be done with treatment.

After doing her own research, Denise came across Dr. Tony’s treatment center.

Adult scoliosis is a different ballgame than adolescent scoliosis because adults have reached skeletal maturity, meaning their spines have settled due to maturity and gravity, and related compression of the spine and its surroundings that develops alongside progression can cause varying levels of pain. 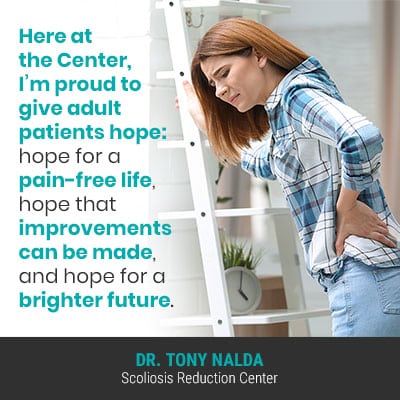 In only four days, Denise’s scoliosis was reduced from 31 to 24 degrees, and Denise finally knew what she had suspected for all those years; her suffering was not in her head, and she had a spinal condition that was not beyond the reach of treatment.

We were successful in achieving what I aim for in many of my adult scoliosis patients: reducing a scoliotic curve back to the size it was prior to causing pain and other noticeable symptoms.

Realistically, we’re not trying to reduce an adult’s scoliosis back to zero, but we can certainly make a big difference when it comes to pain and quality of life.

Scoliosis is a complex condition, and the reality is that many doctors simply say there is nothing to do but wait for it to get worse because they are unaware of treatment options other than spinal fusion surgery.

However, only patients whose scoliosis has progressed into the severe and very-severe levels are candidates for surgery, hence the watch-and-wait approach of traditional treatment.

Here at the Center, I’m proud to give adult patients hope: hope for a pain-free life, hope that improvements can be made, and hope for a brighter future.

The right time to treat scoliosis proactively is always now, regardless of age, and while many consider scoliosis to be largely an adolescent spinal condition, the actual rates of scoliosis increase with age.

With many of my adult patients, the focus is reducing a scoliosis back to the size it was prior to causing noticeable symptoms like pain and then working to stabilize the spine so the reduction can be sustained for long-term results.

In addition, causation is an important factor that has to drive the crafting of effective treatment plans, as is the case with Eli and his traumatic scoliosis.

Here at the Scoliosis Reduction Center, I have experience treating a wide range of condition types and patients of all ages.

For adults struggling to deal with their scoliosis, I want them to know there are treatment options outside of surgery that can greatly improve their quality of life and give hope for a brighter future.