There are different treatment approaches to choose from for scoliosis treatment, and those approaches favor a different type of spinal brace. The most commonly used traditional scoliosis spinal brace is the Boston, while the modern ScoliBrace represents the culmination of what we’ve learned about scoliosis and bracing as a form of treatment over the years.

When a person is diagnosed with scoliosis, they have an abnormal sideways spinal curvature, with rotation and a Cobb angle of 10+ degrees.

Once a diagnosis is given, the most important decision moving forward is how best to treat it.

As a progressive condition, the very nature of scoliosis is to worsen over time, particularly if severe or if left untreated.

For those who choose to follow a traditional approach to scoliosis treatment, the treatment focus is preventing further progression, but this is not the same as working towards a correction.

Also called conservative, functional, or chiropractic-centered, a modern scoliosis treatment approach aims to achieve corrective results rather than solely focusing on preventing the condition from getting worse.

Corrective results mean impacting the condition on a structural level by reducing the abnormal spinal curve.

When it comes to scoliosis spinal braces, the biggest difference between traditional and modern is how their designs are influenced by their end goals.

It should also be said that due to the complex nature of scoliosis, effective treatment needs to integrate different modalities to impact the condition on multiple levels. No brace, on its own, can impact scoliosis the way bracing can when combined with other effective and complementary forms of treatment, such as physical therapy and chiropractic care.

When it comes to scoliosis spinal braces, there are many different types of scoliosis braces, but not all are created equal.

For those following the traditional path of treatment, the treatment journey starts with observing mild conditions to watch and wait for further progression, traditional bracing to manage the progression of moderate scoliosis. Patients are commonly funneled towards spinal fusion surgery once the condition passes the surgical-level threshold of 40+ degrees and shows further progression.

The Boston Brace is the most commonly used traditional brace, and it works towards preventing further progression by squeezing the spine into a straighter alignment.

The Boston Brace was designed in the ‘70s, with its original design still the same today despite our changing understanding of the condition and how the spine responds to different forms of treatment. 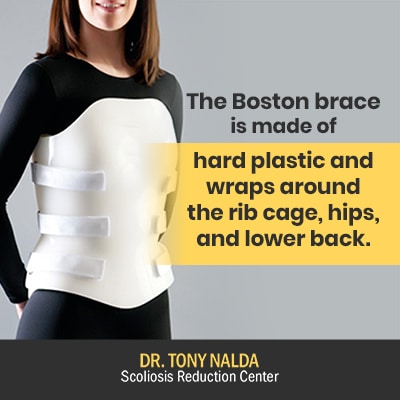 The Boston brace is made of hard plastic and wraps around the rib cage, hips, and lower back.

Through a three-point pressure system, the brace uses strategically-placed pads to put pressure on corresponding points of the abnormal spinal curve; the pads squeeze the spine into a corrective position.

The Boston brace is mass-produced and is not fully customized to address the specifics of a patient’s body type and condition, and even when the brace fits relatively well, it has to be worn full time, meaning 18 to 23 hours a day, for anywhere up to five years.

In addition, due to how traditional braces squeeze the spine, they can also cause breathing difficulties, increase related postural changes, particularly rib arches, and lead to muscle loss due to activity restrictions while wearing the brace. It can also lead to the loss of muscle strength as the brace supports the spine and not the abdominal/spinal muscles.

Another important factor is that scoliosis is a 3-dimensional condition, meaning the spine bends to the sides, but the rotational component means the spine also twists from front to back, back to front.

Traditional treatment, and braces, approach the condition as 2-dimensional, which is why the Boston squeezes the spine from the sides, meaning its efficacy is limited as it’s not addressing the condition’s true 3-dimensional nature.

So while traditional spinal braces like the Boston can help control progression, they can also weaken the spine and its surrounding muscles, leading to additional issues down the road.

Also, the Boston doesn’t correct scoliosis but rather squeezes the scoliotic spine into a corrective position: two very different things.

While the Boston brace does have its place in scoliosis treatment, when appropriate, the dynamic and modern ScoliBrace is my brace of choice here at the Scoliosis Reduction Center.

Modern scoliosis spinal braces are uniquely designed because they have another end goal in mind: correcting the abnormal spinal curve on a structural level by returning the most-tilted vertebrae of the curvature into a more natural alignment with the rest of the spine.

The ScoliBrace is ultra corrective and made from a softer, more flexible material. It opens easily at the front, making them more comfortable and less cumbersome to wear, addressing the prevalent compliance issue with traditional scoliosis spinal braces.

The modern ScoliBrace represents the culmination of what we have learned about scoliosis over the years. It addresses its 3-dimensional nature by reducing the abnormal spinal curve on all dimensions: side to side and front to back.

The ScoliBrace is not only more effective because of its design but also because of the modern treatment approach utilizing it.

A functional chiropractic-centered treatment approach, like the one offered here at the Center, believes that instead of watching and waiting while a mild condition progresses before acting, initiating treatment as close to the time of diagnosis is far more proactive and can help prevent increasing condition severity.

While there are no treatment guarantees, the end goal of modern functional treatment is to preserve the spine’s overall health and function by reducing the abnormal spinal curve and increasing core/spinal muscle strength. That way, the spine is optimally stabilized and supported the way it was designed to be (by its surrounding muscles), rather than being squeezed into a better position. 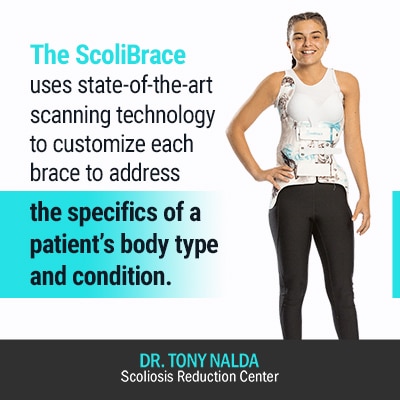 The ScoliBrace uses state-of-the-art scanning technology to customize each brace to address the specifics of a patient’s body type and condition.

The brace works by positioning the spine in an opposite mirror image, reducing scoliotic curves structurally while improving related postural changes.

When used in conjunction with other effective forms of treatment such as chiropractic care, physical therapy, and custom-prescribed home exercises, modern scoliosis spinal braces like the ScoliBrace carry the potential to achieve corrective results and prevent the need for more invasive procedures forms of treatment.

Scoliosis is a highly-prevalent progressive spinal condition with close to seven million people living in the United States alone.

While the condition’s most common form (adolescent idiopathic scoliosis) is idiopathic, meaning we don’t know why it develops, that doesn’t mean we don’t know how to treat it effectively.

Scoliosis has been present for hundreds of years. The general understanding of the condition and how the spine responds to treatment has evolved during this time.

When it comes to scoliosis spinal braces, the different treatment approaches favor other braces with designs aligned with their treatment goals.

As the most commonly-used traditional brace, the Boston impacts progression by squeezing the spine from the sides to eliminate movement, while the modern ScoliBrace works by pushing the spine into an over-corrective position by addressing its 3-dimensional nature.

While the Boston is mass-produced and has changed little since its creation in the ‘70s, the ScoliBrace uses a comprehensive system of scans, pictures, and measurements to ensure that every brace is fully customized for each patient. This customization can address the specifics of each body type and condition, making them more effective and comfortable to wear.