While there are some forms of scoliosis that have known causes, its main form, adolescent idiopathic scoliosis, is classed as ‘idiopathic’, meaning no known single cause. With this form, it’s thought that scoliosis develops as a result of multiple factors that can vary from person to person.

The question of what causes scoliosis is a complex one to answer because the condition has different forms. While we know what causes some forms of scoliosis to develop, adolescent idiopathic scoliosis is the most common form with no known cause, so let’s start there.

The main type of scoliosis is adolescent idiopathic scoliosis, and this form of the condition is classed as idiopathic, meaning its development can’t be tied to one specific cause.

The general consensus is that it’s a multifactorial problem, meaning there are multiple factors that can lead to scoliosis. These factors can lead to a patient developing scoliosis while they are in the adolescent stage of rapid growth and development.

Typically, when a curve first develops, it’s small and appears in pre-adolescence, meaning either at birth, in the infantile, or juvenile stage. What we believe is that whatever caused the small curve to develop initially might have resolved itself, but the growth and development that follows causes the curve to worsen and become a structural issue.

Therefore, whatever causes the scoliosis to develop initially becomes almost irrelevant because by the time we can see the curve and diagnose it, it could be years after that initial cause. When we do catch it, it’s because it’s progressed and become more noticeable, most often due to the trigger of growth and development; by this time, it’s become a structural issue.

In order to treat this form of scoliosis, it has to be dealt with as a structural issue of the spine due to the condition’s structural component, regardless of what caused it.

When it comes to adolescent idiopathic scoliosis, I understand the need to know what causes the condition. What I remind patients and their families is that not knowing that initial cause doesn’t necessarily make a difference to how we treat the condition, or the efficacy of that treatment.

This is important to understand because even if we knew the causes and could eliminate them at that later stage of discovery and diagnosis, the curve wouldn’t spontaneously disappear.

For example, there are theories that nutritional and neurotransmitter deficiencies can cause scoliosis, so let’s say a patient develops scoliosis because of one of these reasons at the age of 6.

At 6 years of age, a small 5- or 10-degree spinal curvature develops. At this time, the curve would be too small to notice and remains undiagnosed until progression hits when they’re an adolescent. During those first big growth spurts, that curve increases to 30 degrees.

At this point, even if we were to eliminate the nutritional or neurotransmitter deficiencies that caused the curve to initially appear, that 30-degree curve isn’t going from 30 degrees to zero because that curve has grown with the patient and become a structural issue.

By the time we reach diagnosis and treatment, that initial cause is irrelevant because the change is structural and has to be dealt with structurally.

That being said, I do still believe we need to search for the answer to what causes idiopathic scoliosis to develop, but the truth is we may never find it because it’s likely multifactorial.

I like to use the example of a fever to explain this further. A child can develop a fever for multiple reasons: infection, virus, healing response, injury, etc. A fever, however, isn’t structural, meaning that once whatever caused it is resolved, there are no consequences.

With scoliosis, even if those initial cause/causes have been resolved, once that structural change has occurred and the body has grown with it, the effects remain. It then becomes more important to understand why growth triggers progression, rather than what caused the condition’s development.

There are numerous theories regarding what causes scoliosis to progress during growth; a strong one explains it as a result of neurological tension within the spinal cord itself.

While this is purely theoretical, I do think it’s a strong component, although not the only component, that affects progression during growth and development. 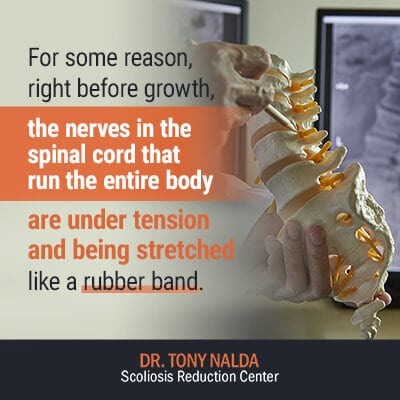 The spinal cord is a fixed length from the skull to the sacrum. For some reason, right before growth, the nerves in the spinal cord that run the entire body are under tension and being stretched like a rubber band.

If an adolescent enters into a rapid stage of growth that’s elongating their spinal cord at the exact same moment, the only thing the body can do to protect the cord is to create a curve to reduce the tension within the cord. This is why scoliosis progresses rapidly during growth, and the minute you stop growing, progression can stop as well.

This theory seems plausible because if what caused the curve to develop was also the cause of progression, the rate of progression would be the same throughout life, but instead, it stops once skeletal maturity is reached. Because of this, we know it has something to do with spinal length and development and that structural component of the scoliosis.

Although this understanding of the main cause of adolescent idiopathic scoliosis remains theoretical, there are other forms of the condition with known causes.

Forms of Scoliosis with Known Causes

Although adolescent idiopathic scoliosis is by far the condition’s most common form, additional forms include congenital, neuromuscular, and degenerative scoliosis. All of these forms develop as a secondary complication of a serious medical condition, disease, or issue.

Congenital scoliosis is a condition in which a malformed bone in the spine causes the scoliosis to develop.

That malformed bone is called a hemivertebra, meaning ‘half vertebra’ and can cause scoliosis to develop. Malformations of this nature are often present at birth.

Neuromuscular scoliosis is a connective tissue disorder, meaning there’s either a soft-tissue disorder in the muscles, ligaments, discs, or all of them; that causes an instability in the spine, which leads to muscle contractions, instability, laxity, and the development of scoliosis.

In adult degenerative scoliosis, there’s degeneration that’s occurring in the spine that’s asymmetrical, leading to the development of a scoliotic curve or scoliosis that will develop over time.

Unfortunately, when people are asking what the main cause of scoliosis is, they’re generally referring to idiopathic scoliosis, and no one can answer that question because it’s unknown.

I think, currently, there are around 70 different theories that are related to the cause of scoliosis in children, right down to getting braces too early or too much time spent in chlorinated swimming pools. There are correlations that can be found for many of these theories, which supports the consensus that idiopathic scoliosis doesn’t have a single cause and is, instead, multifactorial.

To be clear, there is no known main cause for the condition’s most common form, adolescent idiopathic scoliosis; however, congenital, neuromuscular, and adult degenerative scoliosis have causes that are known to lead to the development of the condition.

Here at the Scoliosis Reduction Center, we have experience treating all forms of the condition, and whether or not we know that initial cause has little, if any, impact on treatment efficacy.