Can Scoliosis Happen Suddenly? How Fast Does It Develop?

It’s natural for people to wonder just how fast a condition develops. With scoliosis, especially in its most common form (adolescent idiopathic scoliosis), I have heard parents say, multiple times, that the condition seemed to develop overnight. This seems like an unrealistic perception; however, there is a very good explanation as to why so many people feel this way.

In adolescent idiopathic scoliosis, the thing to remember is that the condition could be developing inside, unnoticed, for quite some time. When signs of the condition first appear, it’s natural to assume that it has just developed; however, this is rarely the case as it’s generally not until a condition progresses that noticeable symptoms appear and lead to diagnosis.

Before we really delve into the issue of whether or not scoliosis can happen suddenly and the rate of its development, we first have to visit the topics of ‘condition severity’ and ‘progression’ as these are relevant condition characteristics.

As already mentioned, for our current purposes, we are going to focus on the condition’s most common form, adolescent idiopathic scoliosis, diagnosed between the ages of 10 and 18.

When a patient is first diagnosed, part of that diagnosis includes further classifying the condition.

Scoliosis is further classified based on the patient’s age, condition cause (if known), condition severity, and location of the curvature.

In relation to scoliosis onset and the pace at which it develops, condition severity and progression play leading roles in determining whether a condition is too subtle to notice, or produces overt symptoms that lead to a diagnosis.

Scoliosis has a huge severity range, which is why treatment plans need to be fully customized to address the uniqueness of each patient and their condition.

When a patient is first brought in with suspicions of scoliosis, I conduct an exam, do a visual assessment, and look into the patient’s family history.

I can also tell a lot about a patient’s condition by the way they walk, so this is a common part of my exam.

If I see indicators of scoliosis, I order a scoliosis X-ray taken from a number of angles and in a number of positions. Once I have the results, if scoliosis is present, I can classify the condition, give the patient and their family a diagnosis, and start designing a customized treatment plan.

In terms of condition severity, scoliosis is classified as mild, moderate, or severe.

As scoliosis is an abnormal sideways curvature of the spine that includes rotation, condition severity is based on the size of the scoliotic curve.

A measurement known as ‘Cobb angle’ remains the orthopedic gold standard for assessing scoliosis, and this tells us just how far out of a natural and healthy alignment a patient’s spine bends and twists.

The higher the Cobb angle, the more severe the condition is:

Determining condition severity is not only important in terms of classification, but also in predicting ‘likely’ symptoms a patient might experience and ‘likely’ rates of progression.

I say ‘likely’ because even within one of those severity-level categories, there can be a huge range of symptoms, and no two patients will experience the condition in exactly the same way.

In addition, as AIS is ‘idiopathic’, meaning there is no known single cause, we can’t pinpoint the precise cause, and time, of scoliosis onset.

In relation to the question being asked, can scoliosis happen suddenly, condition severity plays more of a role in determining how noticeable a person’s condition is, based on expressed symptoms.

In other words, let’s say an adolescent is diagnosed with moderate scoliosis and a 30-degree curvature.

Does this mean the condition just suddenly appeared with a 30-degree curvature, or is it more likely that the condition had been around for a while, progressed from mild into the moderate stage, and then started to produce symptoms overt enough to bring them in for a diagnosis?

The latter is the more likely scenario, and this leads us into the next section: progression.

‘Progression’ is one of those fancy medical terms that mean something pretty simple: a condition getting worse. 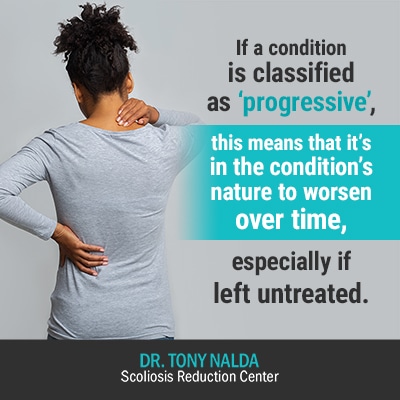 If a condition is classified as ‘progressive’, this means that it’s in the condition’s nature to worsen over time, especially if left untreated.

Scoliosis is an incurable and progressive condition, meaning virtually all cases are going to get worse at some point; it’s just a matter of how long it will take.

There is no general formula to apply that can accurately predict how fast, or slow, a patient’s condition will progress; however, certain forms and patient characteristics can help us predict likely rates of progression.

When I mentioned earlier how age can indicate ‘likely’ progression rates, this is what I was referring to.

For patients who have not yet reached skeletal maturity, we know that progression is a big element, and this has to be factored into our treatment plan moving forward.

Part of treatment for AIS involves monitoring the patient’s growth, observing how the scoliotic spine responds to that growth, and adjusting their treatment plan accordingly to stay ahead of the condition’s progressive line.

Here is an interesting characteristic of AIS: the condition is rarely painful. This is because for adolescents who have not reached skeletal maturity, they are always growing, and this includes the spine.

As the spine is experiencing a constant lengthening motion, this counteracts the compression caused by the abnormal curvature: the cause of scoliosis-related pain in adults.

While the absence of pain is a good thing in one regard, in respect to early detection, it presents a challenge.

The absence of pain makes it that much easier to develop the condition without noticing, so at the point at which an adolescent, or their parents, first notice signs of scoliosis, this isn’t necessarily indicative of when the condition first developed.

Instead, it’s likely that the mild-scoliosis stage went unnoticed, and it wasn’t until the condition progressed into the moderate stage that it started to produce noticeable symptoms, such as postural changes.

In mild scoliosis, the postural changes it can produce are very often too subtle for anyone other than a scoliosis specialist to notice.

This is why the majority of my patients are adolescents in the moderate stage of progression. So while it might seem like a condition suddenly developed, this is likely not the case; it’s more accurate to say the condition was suddenly ‘noticed’.

To return to a statement from earlier, parents and caregivers of AIS patients are often shocked to see those first X-ray images; they can’t believe that a spine that misshapen could have taken so long to notice.

When parents tell me that their child looked fine one day, and like something was off the next, this is often due to the fact that the child just went through a big growth spurt. 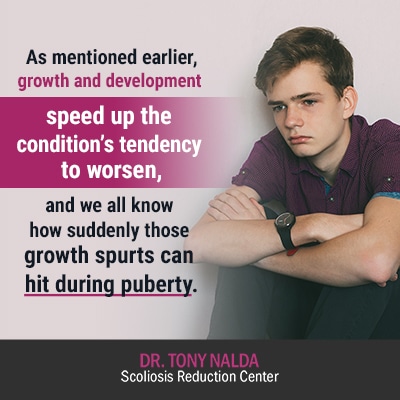 As mentioned earlier, growth and development speed up the condition’s tendency to worsen, and we all know how suddenly those growth spurts can hit during puberty.

This is why children can seem to have grown overnight, and as scoliosis progression is so closely linked to growth, it can also seem as though the scoliosis has developed overnight; what has really happened is that growth has simply sped up the condition’s progression.

While the most common cases of scoliosis involve adolescents, adults can develop it too, and progressive rates and symptoms change significantly once skeletal maturity has been reached.

While we have focused on AIS as the condition’s most common form, I would also like to address the question of how fast scoliosis develops in adults.

There are two main forms of scoliosis in adults: idiopathic and degenerative.

When idiopathic scoliosis is present in adults, these patients had AIS in their younger years, but were unaware.

As AIS is not painful, and in many cases of scoliosis, especially when it’s mild, the postural changes it produces are too subtle to notice.

What often happens is these adolescents don’t realize something is amiss until they have reached skeletal maturity and noticeable postural changes and symptoms like pain appear.

Obviously, in this form of adult scoliosis, the condition has been progressing steadily over the years so has not developed suddenly.

When skeletal maturity is reached, that big trigger for progression (growth) is removed, so progression tends to be slower, although the cumulative effect of progression over many years can still add up to a large degree of curvature.

Most common in adults over the age of 40, degenerative scoliosis develops due to natural degenerative changes experienced by the spine that can accompany aging.

Most often, it’s the intervertebral discs that start to erode. Over the years, the spine, just like the rest of the body, incurs the effects of wear and tear.

Aging doesn’t necessarily equal an unhealthy spine, but lifestyle choices such as bad posture, lifting heavy objects improperly, and inactivity can build up over the years.

Once the intervertebral discs start to erode, as part of their role is to act as ligaments connecting parts of the spine, this can cause the spine to slip out of alignment and scoliosis to develop as a result.

In these cases, it’s the cumulative effects of years of degenerative changes associated with aging, plus lifestyle choices, that can impact the health of the spine and lead to the development of scoliosis.

So, again, with both the most common forms of adult scoliosis, neither happen suddenly, and rates of progression will vary based on the patient’s age, type of condition, and severity level.

When a condition is classified as progressive, this means that it is bound to get worse over time.

With scoliosis, the condition’s progressive line goes from mild to moderate, and severe. While early detection is highly beneficial in terms of treatment efficacy, this is not alway possible, especially in cases of AIS where there is often an absence of noticeable symptoms.

What this leads people to ask, especially parents and caregivers of adolescents recently diagnosed is, can scoliosis happen suddenly?

While scoliosis can seem to appear overnight in adolescents, based on how growth spurts during puberty are known to speed up progression, it’s more accurate to say the condition doesn’t appear overnight, but rather that a point is reached in the progressive line when it suddenly becomes noticeable.

Even in the most common forms of adult scoliosis, the condition has either progressed throughout adolescence and into adulthood, or adults develop scoliosis due to the natural degenerative effects of aging on the spine.

Regardless of when a condition is first noticed and diagnosed, it is never too late to start proactive treatment. If you or a loved one suspects scoliosis could be an issue, don’t hesitate to reach out to us here at the Scoliosis Reduction Center.

We can help answer your questions, empower you with information on treatment options, and come up with a customized treatment plan.

Regardless of how far your condition has progressed by the time it is diagnosed, there is still great potential to help control and manage its progression moving forward.