Scoliosis Progression: Does Scoliosis Get Worse Over Time?

As a progressive and incurable condition, scoliosis is a spinal deformity that, if left untreated, is virtually guaranteed to get worse over time. While there is no easy formula to apply that tells us just how fast, or slowly, a patient’s condition will progress, we know its main trigger is growth, which we monitor closely.

As a highly variant condition, scoliosis can be classified as mild, moderate, or severe. This classification is based on the patient’s Cobb angle, and this characteristic tells us how severe a patient’s condition is, guiding our treatment approach moving forward.

The first important thing to understand about scoliosis is how much it can range in severity from one person to the next. Condition characteristics such as where along the spine the curvature is located, cause (if known), age of patient, and size of curvature all weigh in when it comes to shaping a person’s condition and related symptoms.

While all the above characteristics are important pieces of information used in shaping a treatment plan, perhaps the most important is the size of curvature, also known as the Cobb angle.

Once I have comprehensively examined a patient and studied their scoliosis X-ray, I know everything I need to know to design an effective and customized treatment plan moving forward.

You might be wondering how much over 40 degrees a Cobb angle can reach; the largest curvature I have seen is a 150-degree curve. With that, you can see how significantly the condition can vary in severity. Also, keep in mind that that doesn’t mean curvatures can’t exceed 150; that’s just the most severe form I’ve seen, so far.

So when it comes to classifying a condition as mild, moderate, or severe, another key thing to remember is that as scoliosis is progressive, the classification that a patient receives at the time of their diagnosis is not a fixed point. If left untreated, or if a passive treatment approach is chosen, that condition is virtually guaranteed to get worse over time. 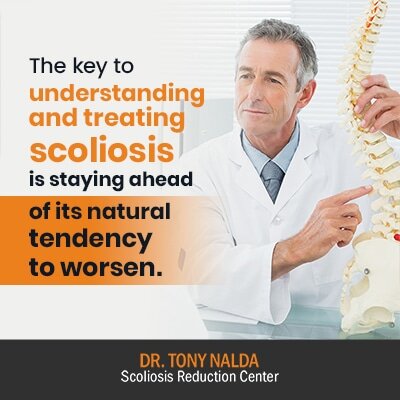 The key to understanding and treating scoliosis is staying ahead of its natural tendency to worsen. There are two main treatment approaches a patient can choose between: traditional and functional.

As we move on, let’s take a look at how these two approaches would handle a patient’s condition at varying points along their progressive line.

In order to get a scoliosis diagnosis, a couple of parameters have to be met. Firstly, the patient’s Cobb angle has to be over 10 degrees; secondly, their curvature also has to include rotation.

Once a scoliosis diagnosis is given, there is an important decision to be made, a decision that will determine how a patient experiences and responds to their condition, and this will shape their life moving forward.

Based on the two main treatment approaches mentioned, traditional and functional, there are two ways to respond to a patient freshly diagnosed with mild scoliosis: passively, or actively.

Those opting for traditional treatment for a case of mild scoliosis would likely be told that as their condition is currently mild, they should return in 3, 6, or 12 months (depending on condition severity/age) for a re-assessment to determine if, and how much, their condition has progressed.

As adolescent idiopathic scoliosis is, by far, the condition’s most common form, let’s assume this patient is 12 years old. Entering into the puberty stage means this patient is about to go through rapid and unpredictable growth spurts; this means they are about to face the conditon’s biggest trigger for progression: growth.

Yet, traditional treatment would mean passively watching and waiting while a case of mild scoliosis is left to progress unimpeded.

Does Scoliosis Get Worse Over Time?

Those opting for the functional treatment approach we offer here at the Scoliosis Reduction Center would experience things very differently.

We would tell the patient that while their condition is currently mild, it will naturally progress, especially because of the big growth trigger looming. We would tell them that in order to stay ahead of the condition’s progressive nature, we want to start treatment as soon as possible.

We would explain that while there is no harm in trying to reduce a small curvature, there most certainly is harm to leaving a small curvature to progress into a bigger one. We don’t believe in wasting valuable treatment time in favor of passively observing a condition.

At this point, our treatment plan would likely combine monitoring and scoliosis-specific treatment disciplines such as chiropractic adjustments, therapy, and exercises.

While every patient’s condition is different and ever-changing, there are some common symptoms associated with each stage of severity. The most commonly observed signs of mild scoliosis include:

Basically, an overall asymmetry of the body is the biggest indication that scoliosis is present. While the above signs might seem extreme, at the mild-scoliosis stage, they can be very subtle and only noticeable to experts who know exactly what they are looking for; this is why early detection can be such a challenge.

The next stage in the progressive line of scoliosis is moderate scoliosis. If a person hasn’t noticed the above signs of mild scoliosis, at some point, their condition will progress into the moderate stage.

Even with a moderate scoliosis diagnosis, the traditional treatment approach would still be mainly observing at this point. Their approach is to watch and wait until a condition progresses to a surgical-level degree of curvature, and then spinal-fusion surgery is recommended as the best option.

In addition to observation, traditional treatment might recommend the use of a Boston brace at this stage. The Boston brace, however, does not have correction as its goal, but rather attempts to stop or slow progression; it does nothing to actually address the structural nature of the scoliosis.

Let’s say the Boston brace is unsuccessful at slowing progression for any number of reasons, the condition would continue to progress, moving closer to that severe-scoliosis designation. 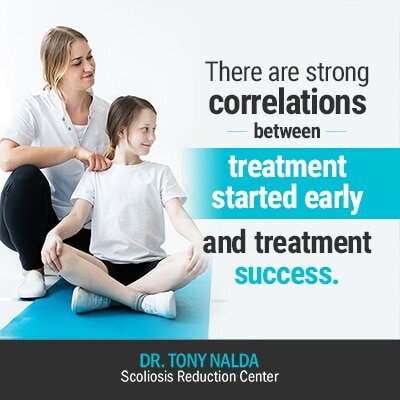 There are strong correlations between treatment started early and treatment success. In cases of moderate scoliosis, we continue to actively treat it to reduce the curvature at a structural level, lessing any related symptoms along with it.

At this stage, we could continue with our aforementioned treatment disciplines, with the possible addition of the corrective ScoliBrace. This brace represents the culmination of what we have learned about the shortfalls of bracing for scoliosis patients.

The ScoliBrace is corrective, meaning its end goal isn’t merely to slow or stop progression; it works to actually ‘correct’ the scoliosis by impacting it at a structural level.

Based on our assessments and X-ray results, we would apportion our treatment disciplines accordingly, tweaking the plan as necessary to address any changes in growth, progression, and related symptoms.

At this stage, posture suffers more and sets adolescents apart from their peers.

At the stage of moderate scoliosis, the signs of mild scoliosis would become more pronounced and noticeable:

For patients who have reached the moderate stage, it’s even more important to take active strides to stay ahead of progression as the next stop along the line is severe scoliosis.

Once a person enters into the severe-scoliosis stage, they are entering into the final stage of the condition’s progressive line. Once a curvature reaches ‘severe’ status, it is at a higher risk for progression.

At this stage, patients often face the painstaking choice of whether to undergo spinal-fusion surgery or not.

Once a patient’s curvature breaks 40 degrees and shows little or no response to the Boston brace, it’s in this stage that they are often funneled towards spinal-fusion surgery.

Spinal-fusion surgery involves fusing the tilted vertebrae of the curvature together into one solid bone to eliminate progression, but this also eliminates future movement in the fused section of the spine. To hold the vertebrae in place while they fully fuse, rods and screws are commonly attached to the spine.

This carries numerous risks and potential complications that should be carefully weighed when considering such an invasive and costly procedure.

At this stage, those who have followed the traditional-treatment route watched their condition progress with little active effort to stop it, and now they would likely find themselves facing a spinal-fusion recommendation.

For those following our functional treatment approach, if we have been successful, which we very often are, our patient would have never reached this point in their progressive line.

All our active early treatment started at the time of a patient’s diagnosis has the ultimate goal of correction and prevention: correcting the abnormal curvature by achieving a curvature reduction on a structural level, thus preventing the need for spinal-fusion surgery by never allowing the degree of curvature to reach surgical level.

Also, our approach, being natural and noninvasive, carries few, if any, side effects, unlike spinal-fusion surgery. If a patient is ever unhappy with the results of our treatment, there is no harm done; if a patient is unhappy with the results of spinal-fusion surgery, there is no going back. If surgery fails due to a complication with the patient or the hardware used, the only response is more surgery.

In severe scoliosis, the symptoms associated with mild and moderate scoliosis are amplified, with increasing potential for some additional complications:

The more severe a person’s scoliosis gets, the larger their abnormal curvature becomes, increasing the potential for experiencing more severe symptoms and related complications.

To answer the question plainly of if scoliosis gets worse over time: yes, as a progressive condition, virtually all cases of scoliosis will get worse at some point, especially if left untreated.

While there is no way to fully predict a patient’s rate of progression, age helps determine the likeliest rate. For adolescents entering into the puberty stage of rapid growth and development, this age group is at the highest risk of rapid progression; adults who have reached skeletal maturity tend to progress slower, but even with slow progression, the cumulative effects of progressing as little as .5 of a degree a year add up over time.

Regardless of your age or severity level, the best thing you can do to get some control over your condition’s progression is to seek active treatment, such as the proactive functional treatment approach we offer here at the Scoliosis Reduction Center.