Even though scoliosis is the leading spinal condition amongst school-aged children, and current estimates are close to seven million living with the condition in the United States alone, there is a lot of misinformation out there. Part of the reason scoliosis is so often deemed a complex condition to treat is because no two cases are the same, which is why the customization of treatment plans is key.

Scoliosis is a highly-prevalent spinal condition that involves a loss of its healthy curves. There are also different types of scoliosis, with different causes and treatment needs. The most common symptoms of scoliosis are postural changes and back/radicular pain.

Let’s start our explanation of scoliosis by discussing the parameters that must be met to diagnose scoliosis.

Being Diagnosed with Scoliosis

In order to reach a diagnosis of scoliosis, certain parameters have to be met.

Scoliosis is a structural spinal condition that involves the development of an unnatural sideways spinal curve with a rotational component.

It’s the rotational component that makes scoliosis a 3-dimensional condition as the spine doesn’t just bend unnaturally to the side, but also twists from front to back, back to front.

In addition to an unnatural sideways spinal curve, with rotation, the curve has to have a Cobb angle measurement of 10+ degrees.

The diagnostic cutting point of 10 degrees was decided, somewhat arbitrarily, as a means of standardizing the diagnostic process.

A patient’s Cobb angle is a measurement taken during an X-ray that tells me how far out of alignment a scoliotic spine is and places conditions on a severity scale:

A key feature to understand when it comes to scoliosis is that as a progressive condition, where scoliosis is at the time of diagnosis is not indicative of where it will stay.

A patient diagnosed with mild scoliosis can easily progress to moderate, severe, or very severe, particularly if left untreated or not treated proactively.

So now that we’ve discussed what it means to be diagnosed with scoliosis, let’s address causation. 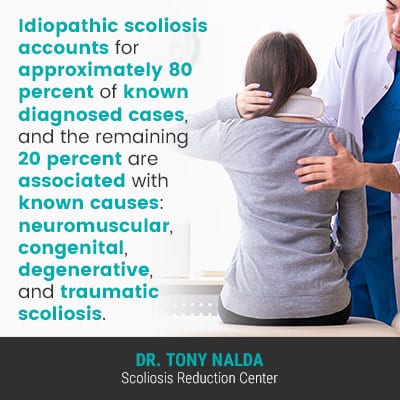 As mentioned earlier, scoliosis is a complex condition, not just because of its prevalence and how widely it ranges in severity but also because there are different types.

The most prevalent form of scoliosis is adolescent idiopathic scoliosis (AIS), diagnosed between the ages of 10 and 18, and the idiopathic designation means not clearly associated with a single-known cause.

Idiopathic scoliosis is thought to be multifactorial: caused by the combination of different variables that can differ from patient to patient.

So in the majority of scoliosis cases (idiopathic), we don’t fully understand what causes the condition’s initial development.

What I remind patients is that just because we don’t know what caused a condition to develop doesn’t mean we don’t know how to treat it, and even if we did fully understand its etiology, it wouldn't necessarily change the course of treatment or its outcome.

Neuromuscular scoliosis (NMS) is caused by the presence of a larger neuromuscular condition, like cerebral palsy, muscular dystrophy, or spina bifida, that affects the connection between the brain and the muscles and connective tissues that support the spine.

In cases of congenital scoliosis, infants are born with the condition due to a malformation within the spine itself that develops in utero; this is a rare form affecting approximately 1 in 10,000.

In cases of degenerative scoliosis, this type is caused by natural age-related spinal degeneration, most commonly affecting the spine’s intervertebral discs first.

As the name suggests, traumatic scoliosis is caused by a trauma or injury, such as in a car accident or fall.

In addition, the presence of tumors pressing on the spine can also force it out of alignment and cause the development of traumatic scoliosis.

So now that we know what causes the different types of scoliosis let’s talk about symptoms.

Remember, as a condition that can range so widely in severity from mild to moderate and severe to very severe. Not two patients will experience scoliosis in the exact same way.

There are many patient/condition variables that shape a person’s experience of life with the condition, such as patient age and overall health, condition type, curvature location, and severity, and these are the variables that further classify conditions and inform the crafting of effective treatment plans.

Scoliosis introduces a lot of uneven forces to the body, which is why the main symptom of scoliosis in children and adolescents is postural deviation:

In addition to the postural changes caused by a disruption to the body’s overall symmetry, ill-fitting clothing and changes to gait, balance, and coordination are additional symptoms of scoliosis.

While one or two bodily asymmetries don’t guarantee a person has scoliosis, it can indicate the need for further testing.

You’ll notice that pain wasn’t on the list, and that’s because in the condition’s most-prevalent form, AIS, the condition isn’t commonly painful.

Scoliosis becomes compressive in adulthood once skeletal maturity has been reached.

While growing, the spine experiences a constant lengthening motion, which counteracts the compressive force of the unnatural curve, and once a person stops growing, the spine and its surrounding muscles and nerves are vulnerable to compression: the main cause of condition-related pain.

So for adults, in addition to the aforementioned postural changes, and a prominent lean to one side, the main scoliosis symptom is back or radicular pain due to compressed nerves.

In fact, most adults who come to see me for a diagnosis are experiencing pain in the arms, hands, and feet; remember, nerves are like branches on a tree, fanning off in different directions, which is why nerve pain can be felt far from its site of origin.

So now that we know some of the condition’s most common symptoms and the main difference between adolescent and adult scoliosis, let’s move on to treatment options.

There are two main scoliosis treatment approaches for patients to choose between: traditional and conservative.

It’s important to know the differences between them because each has its own end goal and offers patients a different potential outcome.

Once a diagnosis of scoliosis is given, the most important decision is how to treat it moving forward.

So let’s talk about the differences between the two main scoliosis treatment approaches.

Under the banner of traditional scoliosis treatment, patients with mild scoliosis are told to watch and wait for signs of further progression, and this is because traditional treatment doesn’t have a strategy for addressing scoliosis while mild, so it has to wait for it to progress to a certain point, before applying treatment.

The issue with watching and waiting is that it’s wasting valuable treatment time, while allowing conditions to progress unimpeded; as a progressive condition, we know that virtually every case of scoliosis is going to progress at some point.

While there are never treatment guarantees, early detection, when it’s responded to with proactive treatment, has a number of benefits; it’s far simpler to treat scoliosis while mild before significant progression has occurred, the curve is larger, more rigid, less responsive to treatment, and before the body’s had ample time to adjust to the unnatural spinal curve’s presence.

Traditional treatment has to stop progression as its end goal, not correcting scoliosis, and if bracing is unsuccessful at stopping progression and a patient progresses into the severe classification at 40+ degrees, they are commonly funneled toward spinal fusion surgery.

While all surgical procedures come with their share of risks, spinal fusion is a costly, lengthy, and invasive procedure that can cost the spine in terms of its overall strength, function, and health. 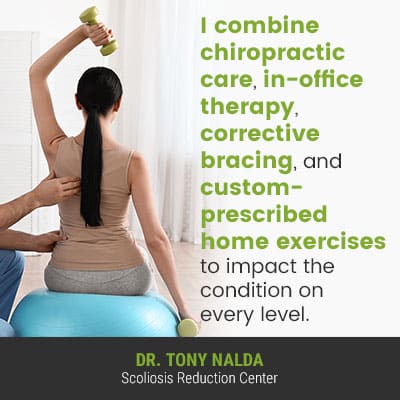 Here at the Scoliosis Reduction Center, I treat patients with a conservative chiropractic-centered treatment approach that strives to preserve as much of the spine’s natural strength and function as possible.

My approach is also proactive, meaning I start treatment as close to the time of diagnosis as possible; that way, I can work towards preventing progression, increasing condition severity, escalating symptoms, and the need for invasive treatment in the future, like spinal fusion surgery.

Patients of the Center also benefit from an integrative approach that involves combining multiple forms of condition-specific treatment for the best potential results.

I combine chiropractic care, in-office therapy, corrective bracing, and custom-prescribed home exercises to impact the condition on every level.

First and foremost, as a structural condition, scoliosis has to be impacted on a structural level, and I work towards this through achieving a curvature reduction; I use a variety of chiropractic techniques and manual adjustments to adjust the position of the curve’s most-tilted vertebrae back into alignment with the rest of the spine.

Once I see structural results, I can shift the focus to increasing core strength so the spine is optimally supported by its surrounding muscles, and this is achieved through a variety of therapies.

To augment corrective results achieved through other treatment disciplines, I use ultra-corrective bracing, and my brace of choice is the modern ScoliBrace, which addresses the shortcomings of traditional bracing by having correction as its end goal and addressing the condition’s true 3-dimensional nature.

Through custom-prescribed home exercises, a home-rehabilitation program can be established to further stabilize the spine for sustainable long-term results.

Scoliosis is the development of an unnatural sideways spinal curve, with rotation, and a minimum Cobb angle of 10 degrees.

The rotational component makes it a 3-dimensional condition, and with different types and severity levels, the complex nature of scoliosis necessitates a customized treatment approach.

The main scoliosis symptom in children and adolescents is postural deviation, while the main symptom in adults is pain.

In adults, the main symptom of scoliosis is pain, either localized back pain and/or radicular pain felt throughout the body due to nerve compression.

When it comes to scoliosis treatment, it’s important for patients, and their families, to be aware of all options available to them.

While there is still a place for spinal fusion in the treatment of scoliosis, in most cases, it can be treated non-surgically, with a conservative chiropractic-centered treatment approach that values being proactive and preserving as much of the spine’s natural function as possible.