ICD 10 Codes for Scoliosis: What They Are & Scoliosis Types

A few years back, the United States government and the American Medical Association developed a new system of diagnostic coding for classifying diseases and disorders. It was called ICD 10, an acronym for International Classification of Disease, and the ‘10’ is the edition number. Classifying a condition like scoliosis is important because it clearly communicates to health-care professionals what type of scoliosis they are dealing with; this is especially important in conditions, like scoliosis, that can take many forms.

Before we go into the specific codes for scoliosis, let’s first take a look at what goes into classifying the condition, such as time of diagnosis, causation, and curvature location.

When a patient’s scoliosis is classified, when their condition was first diagnosed is what the final classification is based on. In other words, if a patient was first diagnosed with scoliosis when they were a teenager, but as the condition was mild, they didn’t seek out active treatment until well into adulthood, the case would still be classed as adolescent scoliosis, not adult scoliosis.

This is important because the reason behind the original onset of a condition or disease helps indicate what form of treatment would be most effective. Particularly with scoliosis, as a progressive condition, when it’s first diagnosed is even more important because condition characteristics can change so substantially over the years.

Determining causation is not an easy thing with scoliosis. The condition’s main form, adolescent idiopathic scoliosis, has no known single cause, which is why it’s classified as ‘idiopathic’. However, there are some forms of the condition with known causes, such as congenital, neuromuscular, degenerative and traumatic, and the ICD 10 codes will reflect the cause, if known.

Location of the Curvature

There are three main sections of the spine: cervical (upper back and neck), thoracic (middle back), and lumbar (lower back). While scoliosis most commonly develops in the thoracic region, it can develop anywhere along the spine, which is why location is another important classification point.

What are ICD 10 Codes for Scoliosis? 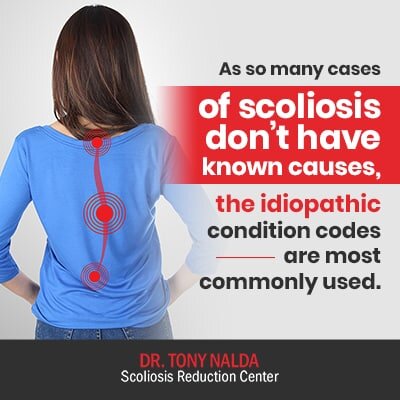 Adolescent Idiopathic Scoliosis (code M41.12): as mentioned earlier, scoliosis is most commonly diagnosed between the ages of 10 and 18. This group represents approximately 80 percent of diagnosed cases, and there is no known single cause with this form.

Scoliosis isn’t always easy to catch, especially in its milder forms or early in the condition’s progression. With adolescents, pain is rarely present, making it more difficult to notice, and postural changes are often subtle and would only be noticed by a specialist who knows how to recognize those subtle signs.

Infantile Idiopathic Scoliosis (code M41.00): infantile idiopathic scoliosis is defined as scoliosis diagnosed in infants between birth and the age of 3. Again, this form is idiopathic, so causation is unknown.

While some cases of infantile idiopathic scoliosis resolve on their own, for those that don’t, as growth is the main trigger for progression, these infants face the likelihood that their curvature will progress to severe levels in later life.

Juvenile Idiopathic Scoliosis (code M41.11): juvenile idiopathic scoliosis is defined as scoliosis diagnosed in individuals between the ages of 3 and 9 with no known single cause.

Again, as growth is such a big trigger for the condition’s progression, this age group faces a high risk of progression because they have so much growth yet to go through.

Additional Idiopathic Scoliosis Conditions (code M41.2): this code is used for any other conditions that remained undetected prior to the patient reaching skeletal maturity. Most often, skeletal maturity is considered to be reached around the age of 18, but of course, this isn’t exact and differs case by case.

Cases of degenerative or adult ‘de novo’ scoliosis would also fall into this category. These cases are classed as ‘de novo’ because they have developed fresh in adulthood, after skeletal maturity has been reached, with no prior history of having the condition.

These types of cases often involve patients who are over 40 and facing degenerative changes to the spine and the discs that cushion the spine’s individual vertebrae.

Congenital Scoliosis (code Q76.3): congenital scoliosis is one of the condition’s forms with a known cause, which is a congenital bone malformation, like a hemivertebra, that’s present at birth.

Neuromuscular Scoliosis (code M41.4): neuromuscular scoliosis is another form of the condition with a known cause. This code is used to classify scoliosis that develops as a secondary complication of neuromuscular disorders; these would include cerebral palsy, muscular dystrophy, spina bifida, etc.

Obviously, there are many more codes that go with the different forms of scoliosis, and conditions with specific scoliosis-related complications such as cardiac issues or lung impairment have their own codes to further specify the condition.

Why are Medical Coding Guidelines Important?

When a condition is first diagnosed, it has to be comprehensively assessed. This comprehensive assessment involves looking at a number of characteristics involving the patient and their condition and documenting those findings.

The current procedural terminology (CPT) used by the American Medical Association and the ICD are working to classify medical diseases and conditions as thoroughly and consistently as possible. 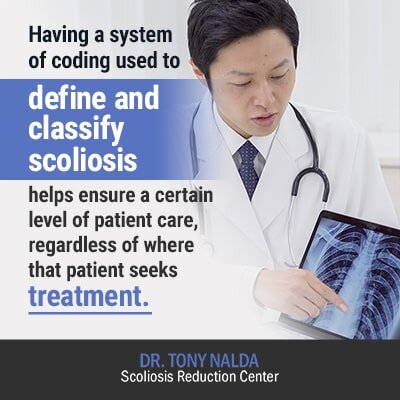 Having a common language and system of coding used to define and classify scoliosis helps ensure a certain level of patient care, regardless of where that patient seeks treatment.

Initial scoliosis coding and sequencing will depend upon the doctor that first diagnoses and documents the condition. If there is a consistent system for classifying scoliosis, different doctors, specialists, and health-care professionals can have a common understanding of the form of the condition they are treating and the requirements that have to be met to accurately define and classify it.

So we know that complete and accurate coding is beneficial to the team of health-care professionals treating a specific patient, but it is also necessary to ensure that an effective treatment plan can be designed and implemented.

Through comprehensive coding, that team will know everything they need to know about the condition to be able to design a customized treatment plan. A treatment plan that is customized accordingly will address the individual characteristics of the patient and the form of scoliosis they are dealing with.

As we have seen, scoliosis is not a simple condition to treat as it ranges widely in severity and can take on many forms. Having a comprehensive and accurate coding system in place addresses this complexity and establishes a method for streamlining the diagnosis and treatment process amongst health-care professionals.

The types of ICD 10 codes for scoliosis are most important in terms of treatment efficacy. Clearly, we want the best for our patients, and here at the Scoliosis Reduction Center, out treatment approach centers around customization.

Having a system of codes and terminology in place helps us understand another doctor’s assessment and diagnosis and also helps us comprehensively assess and diagnose the patients that walk through our doors.

Regardless of where you are in the progressive line of your condition, seeking active treatment is always the best choice.

Together, we can help guide patients on how best to integrate their condition as positively as possible into their life and future goals.