How to Know if You Have Scoliosis

Scoliosis is a complex condition that can be difficult to fully understand. While many of the condition’s characteristics still elude us, there are some common symptoms I like to recommend people watch out for. Early diagnosis carries a lot of benefits in terms of treatment ease and efficacy so screening and early detection is important.

To provide an outline of this discussion on how to know if you have scoliosis, this article will define scoliosis, discuss the importance of early detection, the condition’s severity scale, and touch on signs to look for in adolescents and adults.

First off, it can be hard to spot the development of a condition without at least a basic understanding of what it is. While most people have heard of scoliosis, that’s not the same as fully understanding the nature of the condition.

Scoliosis is a spinal deformity that’s progressive and incurable. When a person develops scoliosis, this means that their spine has an abnormal curvature that deviates from a straight alignment.

When a scoliosis X-ray is ordered, what’s called a Cobb angle measurement will be taken. This measures the degree of the curvature, and if the curvature measures at greater than 10 degrees with spinal rotation, a scoliosis diagnosis will be given.

As a progressive condition, that curvature, if left untreated, is going to continue progressing, although no one can tell just how quickly or slowly that progression will occur.

Scoliosis is a 3-dimensional condition, meaning it’s expressed in the three anatomical planes of the spine: sagittal, coronal, and transverse. Scoliosis doesn’t just make the spine curve unnaturally, it also coincides with rotation. Any treatment plan that doesn’t address the condition as 3-dimensional will be ineffective.

Why Early Diagnosis is Important

With progressive conditions, they’re only going to get worse over time, so when it comes to treatment, early diagnosis is highly beneficial. In terms of scoliosis, this is especially important as it’s much easier to reduce a curvature that’s 15 degrees as opposed to, say, 30+ degrees.

When a condition is caught in its earlier stages, there’s less of a correction needed, and the level of treatment-intensity is less than for conditions that are more severe. Also, when a body has been left to live with scoliosis untreated, it’s adjusted to living with that curvature and it’s that much more difficult to try and manipulate the spine to move back to the position we want it to. 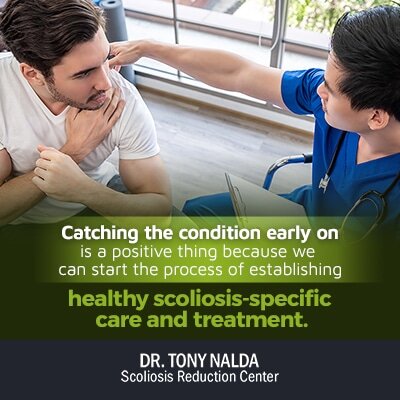 Catching the condition early on is a positive thing because we can start the process of establishing healthy scoliosis-specific care and treatment. The longer a curvature is left untreated and the worse it gets, the more the spine’s entire biomechanics are thrown off, and the harder it is to reverse those structural effects.

Early diagnosis is also important, especially with younger patients, as growth is the number-one trigger for progression. If it’s caught early before the patient has a lot of growth spurts, that progression can be monitored and managed more effectively, and any treatment plan can be tweaked to respond to patterns of growth and progression that become evident.

One of the mystifying things about scoliosis is how much the condition can vary from patient to patient. Even two patients of the same age and gender that are diagnosed at the same time with a 15-degree curve can progress at wildly different rates, making each patient’s experience with the condition completely different. This variability is why it’s so important to fully customize each and every treatment plan to respond to each individual’s condition.

As mentioned earlier, a scoliosis X-ray will tell us where a patient’s condition falls on the severity scale. The Cobb angle measurement designates a patient’s curvature as mild, moderate, or severe; the higher the degree of curvature, the more severe the condition is considered.

When it comes to symptoms to look for, some are subtle while others are overt; the severity level of the condition, plus where along the spine the scoliosis develops, determines the likeliest symptoms you’ll experience. That being said, each and every case is as unique as the condition itself, meaning there’s no one-size-fits-all description of signs to look for.

The designation of scoliosis as progressive and incurable is frightening for people to hear, especially for those just receiving a scoliosis diagnosis. On a positive note, I like to point out that that doesn’t mean the condition can’t be treated and managed effectively.

In addition, the very fact that you’re asking the question of how to know if you have scoliosis means you’re already taking a proactive approach, and that’s the best strategy for increasing the likelihood of early diagnosis and successful treatment.

As scoliosis can affect any age group, the form the condition takes can vary greatly. Its most common form is classed as ‘adolescent idiopathic scoliosis’ (AIS), and the age group it includes (10 to 18 years of age) is the group most commonly diagnosed; this is understood as a result of the rapid growth spurts that characterize the puberty stage.

Signs of Adolescent Idiopathic Scoliosis to Look For

Depending on the severity and form of the condition, symptoms can vary significantly, but following are some common signs that you might have AIS: 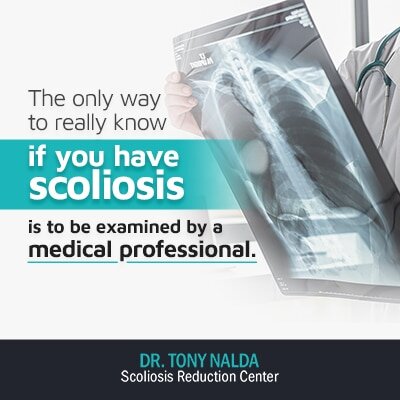 If you are noticing some of these symptoms, it’s not a guarantee that you have scoliosis, but it definitely warrants further investigation. The only way to really know if you have scoliosis is to be examined by a medical professional. Once your X-ray results are in, if you do indeed have scoliosis, you’ll receive your official diagnosis.

Signs of Scoliosis in Adults

The reason we’re touching on signs for adolescents and adults is that the primary indicator for scoliosis in adults is not overly relevant to adolescents with the condition.

I’m sure many readers would assume that scoliosis-related back pain would be the most common sign of the condition. While that can be said of adults with the condition, pain is often a nonissue with adolescents.

When scoliosis develops, the spine loses some of its healthy curves, to varying extents. In response, the body replaces those lost healthy curves with bad curves. Those bad curves place adverse tension on the spine.

As you’re growing, your spine is experiencing a lengthening motion, so there’s an absence of compressive forces. When growth has stopped, that adverse tension on the spine causes compression of the spinal nerves, tissues, and surrounding muscles, and that’s what causes pain and discomfort.

The other interesting thing about scoliosis-related pain in adults is that the pain is often felt in areas of the body, other than the back. Most times, when an adult’s pain brings them in, that pain is felt in the arms, legs, and feet as radiating pain.

For adults, the most obvious sign you have scoliosis, in addition to the aforementioned postural changes, is pain and discomfort.

While there are certain common indicators that scoliosis is present, the only way to know for sure that you have the condition is to be officially diagnosed by a scoliosis specialist. I always recommend seeing a scoliosis specialist as the treatment needs of patients with the condition are very scoliosis-specific. Scoliosis is a complex condition, and if you suspect you have it, you’ll want to be treated by someone who truly understands its nature and treatment needs.

As scoliosis is a progressive condition, patients benefit from early detection. Knowing some of the common indicators of the condition to look for is a proactive way of self-monitoring and advocating for yourself.

If you’re experiencing changes to how you walk, how clothes hang on you, or a general change to your body’s symmetry, these are signs you might have scoliosis. If one shoulder appears higher than the other, a rib hump is present, arms and legs seem different lengths, or one side of your waist seems flatter or rounder than the other, these are further signs you might have scoliosis.

While some of these changes could be attributed to postural issues, the more changes you experience, the more likely it is that something more might be going on. Pain in the back, neck, shoulders, legs and feet are further indicators of scoliosis, especially in adults.

The bottom line is if you’re concerned, see a medical professional. There’s no harm done if the tests are negative, but there’s a lot of harm done by doing nothing while a condition is left to progress on its own.

If you suspect scoliosis might be something you’re struggling with, reaching out to us here at the Scoliosis Reduction Center can get you all the answers you need to move forward.