What Is Disc Desiccation? Symptoms, Causes and Treatment

The spine’s overall biomechanics are reliant upon its natural and healthy curvatures and the health of its individual parts, such as the intervertebral discs. As a person gets older, the body faces degenerative effects, and the spine is no exception. Once the spine’s discs start to dehydrate and degenerate, it can impact the overall health of the spine.

Disc desiccation refers to the loss of hydration experienced by the spine’s intervertebral discs, commonly presenting alongside degenerative disc disease. Symptoms vary depending on the severity and location of the affected discs, but known symptoms include pain, weakness, stiffness, and/or tingling in the back that sometimes radiates into the legs.

Before we discuss the details of disc desiccation and degenerative disc disease, let’s first look at some basic spinal anatomy for a better understanding of the spine’s structure and function as a whole.

Anatomy of the Spine

The spine performs many important functions. It allows us to maintain a straight and upright posture, facilitates flexible movement, provides the body with structure and support, protects the spinal cord, and works in tandem with the brain to form the central nervous system (CNS).

The spine has a complex structure, and its overall health and biomechanics are dependent upon the health of its individual parts and natural curvatures.

The spine has three main sections, each with its own characteristic and healthy spinal curvature: cervical (neck), thoracic (middle and upper back), and lumbar (lower back). The curvatures of the spine give it strength, flexibility, and help to evenly distribute mechanical stress.

Most people are born with 33 vertebrae; these are the individual bones of the spine. As a person grows and develops, the vertebrae at the base of the spine fuse together, leaving most people with 24 by the time they reach adulthood. Adjacent vertebrae are separated by intervertebral discs, of which there are 23. 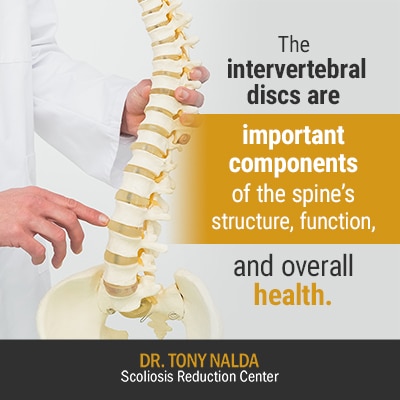 As already mentioned, the intervertebral discs contribute to the spine’s health and function in several ways.

As the discs separate adjacent vertebrae, they provide cushioning so the vertebrae are not rubbing up against one another during movement; constant rubbing would increase degeneration.

By acting as the spine’s shock absorbers, the discs help to evenly distribute the mechanical stress that’s incurred during movement so that no particular section of the spine is taking on more stress and weight than the others.

They also act as tough ligaments providing structure to the spine by holding its individual bones together and cartilaginous joints that allow for flexible movement.

When problems arise with one or more of the spine’s discs, a number of symptoms can be produced, including stiffness, weakness, pain, tingling, and/or radiating pain into the legs.

If the discs can’t perform their roles, the health of the vertebrae are affected, and this impacts the spine as a whole.

Anatomy of the Intervertebral Discs

The intervertebral discs that sit between the spine’s vertebrae consist of two parts: a tough outer shell and a soft inner core.

The outer portion of the disc (annulus fibrosus) is the tough circular-shaped exterior made up of concentric sheets of lamellae (collagen fibers), and this outer shell surrounds the inner core.

The inner portion (nucleus pulposus) is the home of a network of fibers that are suspended in mucoprotein gel.

The annular fibers of the tough outer portion hydraulically seal and protect the gelatinous nucleus within; they also evenly distribute force and pressure exerted on the structure.

The outer and inner portions fit together like concentric cylinders, and cartilaginous end-plates on the outer portion firmly connect the discs to the adjacent vertebrae.

While it’s natural for the discs to lose some hydration as we age, at birth, the discs are composed of approximately 80-percent water. The discs need to stay well hydrated to perform optimally.

Disc hydration is also important as the inner portion is the main bearer of the body’s axial load (force exerted on the spine); nucleus pulposus strength and flexibility is dependent upon its water-based contents.

Now that we have a better overall understanding of the structure and function of the spine and its intervertebral discs, let’s take a look at factors that can lead to disc desiccation.

How Does Disc Desiccation Occur?

Most often, disc desiccation is a feature of degenerative disc disease, and is caused by the cumulation of wear and tear on the spine as we age, and related lifestyle choices. Less commonly, it can also be caused by trauma.

While a certain amount of disc degeneration is expected as a person ages, unhealthy  lifestyle choices are known to increase this.

If a person has an occupation that involves heavy lifting, but over the years, that person has not made the effort to learn how to lift objects properly without unnecessarily straining the back, they are more prone to developing disc desiccation and related back issues.

Being overweight and/or leading a sedentary lifestyle can also play a role in the longevity of the spinal discs. Carrying excess weight puts more strain on the spine and its individual parts, making them work harder to try and absorb/distribute the body’s axial load.

Conversely, sudden weight loss can also contribute to disc desiccation as it can lead to the body, and the intervertebral discs, losing a significant amount of fluid.

As the spine’s very design is to facilitate movement, a person leading a sedentary life with lots of sitting and little activity can also lead to disc desiccation. As the spinal discs don’t have their own vascular supply, the only way they replenish their fluid levels is through movement, so if regular movement is lacking, a loss of the discs’ inner fluid can occur.

In addition, simply not staying hydrated enough, over time, can play a role in the body’s fluid level, including the intervertebral discs.

Trauma can also be the cause of disc desiccation if a fall, accident, or sports injury causes significant damage to the spine.

So what are the symptoms of disc desiccation?

As a certain amount of disc desiccation is natural as we age, not everyone will experience adverse symptoms and even be aware it’s occurring; however, if the dehydration of the intervertebral discs is beyond a normal level, there are some common symptoms. 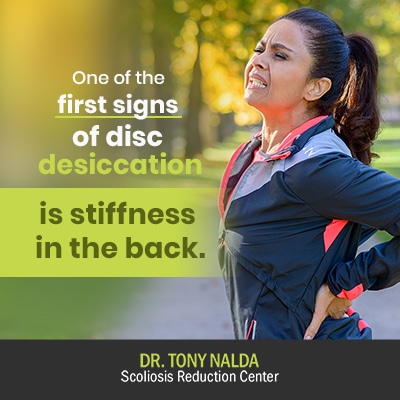 One of the first signs of disc desiccation is stiffness in the back. This stiffness can also be accompanied by pain, weakness, and/or tingling.

If a patient’s symptoms are mild, their doctor will likely advise making some healthy lifestyle changes known to support overall spine health, such as maintaining a healthy weight and practicing good posture. A health-care professional can also provide helpful guidance on how to move and lift with minimal adverse strain on the back.

For patients whose symptoms are more severe, here at the Scoliosis Reduction Center, we would use a conservative approach and treatment efforts would likely include a combination of chiropractic and in-office rehabilitation.

As the effects of disc degeneration occur gradually over time, our chiropractic treatment would focus on reducing joint-stress to help facilitate structural changes.

A customized treatment plan would be designed that would address the individual characteristics of each patient and their condition such as age, where along the spine the affected discs are located, and condition severity.

We would also work towards strengthening the patient’s core muscles as this will provide better support and stability for the trunk and help take pressure off the back.

While it can take a lot of effort, with the right lifestyle changes, and guidance on exercises to improve core strength (strengthening the muscles that help support and stabilize the spine), degenerative effects can be slowed and fluid levels maintained.

However, in most cases, an actual reversal of disc desiccation is only possible during the early stage of degeneration, and as this stage is not generally known to produce noticeable symptoms, it’s rarely caught in time.

In addition, as the effects of disc degeneration are gradual and occur over many years, even if a reversal is possible, it won’t be a quick or easy process.

While a certain amount of spinal degeneration is expected as we age, there are many proactive steps that can be taken to minimize its occurence.

As mentioned, living a healthy lifestyle is a key component of preserving the spine’s overall health and function.

As the spine’s intervertebral discs play such important and numerous roles, they are particularly vulnerable to the effects of degeneration.

When the intervertebral discs start to lose their inner-fluid level, this is known as ‘disc desiccation’ and has the potential to affect the spine in a number of ways.

As a common feature of degenerative disc disease, if left untreated with no efforts made to remove trigger points such as unhealthy lifestyle choices, the condition can go on to cause more serious complications such as the spine becoming misaligned.

If you are experiencing symptoms of disc desiccation and/or degenerative disc disease, don’t hesitate to reach out to us here at the Scoliosis Reduction Center, where you will have access to multiple treatment disciplines located conveniently under one roof.