Scoliosis can lead to a number of seemingly unrelated symptoms and complications. While abnormal curvatures can develop anywhere along the spine, those that affect the lower thoracic, lumbar, or sacral spine are more likely to produce urinary problems, also known as neurogenic bladder dysfunction.

Before we look into the specific connection between scoliosis and the potential development of urinary problems, let’s first explore some characteristics of neurogenic bladder disorder.

What is Neurogenic Bladder Dysfunction?

‘Neurogenic’ references the nerve tissues in charge of supplying and stimulating organs and/or muscles to function optimally.

Urinary problems that fit under an NBD classification include:

When NBD is present, the nerves that control the bladder and the muscles engaged in the urination process cause the bladder to be either over or underactive.

Anyone who has dealt with urinary problems understands how disruptive they can be. Imagine the stress of constantly needing to be near a washroom, or being nervous to leave the house in case of an accident.

Now that we fully understand some of the characteristics and symptoms of NBD, let’s extend that understanding to scoliosis and how it can potentially affect the body’s urinary system.

We know that the brain and spinal cord work together to make up the body’s central nervous system.

We also know that scoliosis, as an abnormal sideways curvature of the spine that coincides with rotation, is a spinal disorder. Considering the role of the spinal cord in relaying messages throughout the body via the nerves running through it, it’s understandable how scoliosis can produce nerve issues. 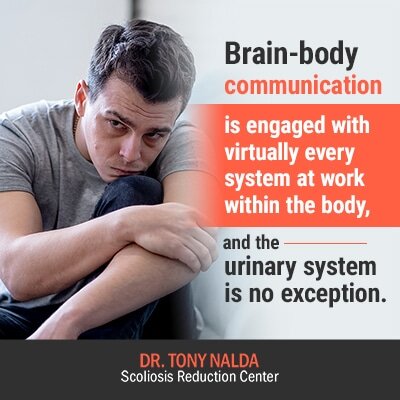 Brain-body communication is engaged with virtually every system at work within the body, and the urinary system is no exception.

As scoliosis develops, the biomechanics of the spine are thrown off and this can lead to compression of the spine and its surrounding muscles, tissues, and nerves.

This is why spinal disorders and/or injuries can lead to multiple issues such as back and radiating pain into the arms, legs, feet, and the loss of sensation in multiple areas of the body.

Now, let’s connect nerves, and what can happen in scoliosis, to the urinary system.

The Urinary System and Nerves

The CNS facilitates the transmission of signals/messages to and from the bladder, such as when it is empty or full.

The spine is an integral part of the CNS and is made up of three main sections: the cervical, thoracic, and lumbar spine. The spine tapers off into a gentle curve at its base where it meets the pelvic bone, and this is called the sacral spine. 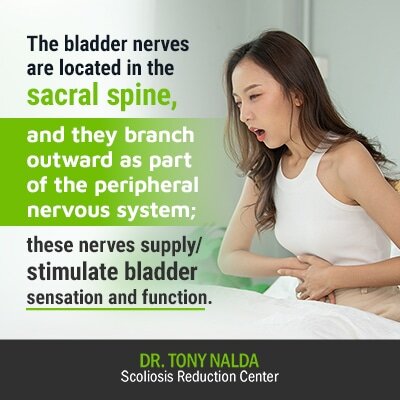 The bladder nerves are located in the sacral spine, and they branch outward as part of the peripheral nervous system; these nerves supply/stimulate bladder sensation and function.

When the nerves in charge of facilitating bladder sensation and function are irritated, inflamed, injured, or compressed, organ dysfunction can also occur, affecting the kidneys and their role in the urinary system.

Kidneys have several important urinary-system roles including removing waste from the body and balancing the body’s fluid and electrolyte levels.

Scoliosis can develop anywhere along the spine, and as curvatures that develop along the lower thoracic and lumbar spine are closest to the cauda equina, these curvatures have the greatest potential to cause compression of the bladder nerves in the sacral spine.

As the nerves in the sacral spine receive/send messages from the brain that the bladder is full or empty, if these nerves are subject to compression caused by the abnormal spinal curvature in the lower spine, this may lead to bladder issues such as urinary incontinence.

While we have established the connection between the optimal functioning of the urinary system and the nerves located in the sacral spine, urinary problems, while a possible complication of scoliosis, is not a commonly experienced one.

What’s interesting is that although we can see a logical connection between scoliosis, resultant nerve compression, and potential urinary problems such as urinary incontinence, there is a gap in clinical studies on the subject.

Stress incontinence involves the weakening of the pelvic floor muscles making them too weak to stop urination and causing urine to leak when pressure is applied to the bladder, such as when sneezing, coughing, or laughing.

Urge incontinence occurs when urine leaks just before and/or after a person urinates.

The study showed that there was not a significant association between pelvic floor weakness and thoracic and lumbar curvatures. This could be due to the fact that scoliosis more greatly impacts the central nervous system, while the urinary system is more reliant upon the peripheral nervous system.

The fact that the peripheral nervous system includes nerves that branch out from the central nervous system does suggest that there could be an indirect relationship between scoliosis and urinary problems, but as is the case with many scoliosis symptoms and complications, every condition is different.

As previously mentioned, scoliosis is a complex condition that can take many forms. When a patient is first diagnosed with scoliosis, part of that diagnosis is further classifying the condition based on a number of characteristics such as cause (if known), age of the patient, curvature location, and curvature severity.

A patient’s condition will be placed on a severity scale of mild, moderate, or severe, based on the size of the abnormal curvature. Generally speaking, the more severe a condition is, the more likely it is to produce adverse symptoms such as bladder issues and urinary incontinence.

As scoliosis is a structural disorder of the spine, it can affect the body in a myriad of ways. While it’s possible for scoliosis to cause compression of the nerves in the sacral spine, known to control urinary function, this is not a common complication.

Scoliosis, as a disorder that affects the central nervous system, has the potential to cause a number of complications; however, complications such as urinary problems, are far more likely to develop in severe conditions, atypical forms, or conditions left untreated.

Scoliosis that develops out of a neurologic condition such as multiple sclerosis or muscular dystrophy has more potential to result in urinary problems, but that is more closely related to the larger neurological condition than the actual scoliosis.

So can scoliosis cause urinary problems like urinary incontinence? Yes, it has the potential to do so, but is not a common complication and would be more likely in severe cases, conditions left untreated, or forms of scoliosis that develop due to a larger neurological disorder/disease.

Here at the Scoliosis Reduction Center, we would address scoliosis-related urinary problems by actively treating the condition as a whole: combining multiple treatment disciplines to achieve a curvature reduction on a structural level, and this would lessen related symptoms, such as urinary problems, as the curvature is reduced.