As a condition that takes many forms, scoliosis can develop due to a more serious condition or disease, such as multiple sclerosis (MS). As the more dominant condition, MS directly targets the central nervous system (CNS); MS can lead to scoliosis, but not vice versa. Scoliosis is a structural deformity of the spine, while MS is a disease of the CNS.

In order to gain a better understanding of the connection between scoliosis and multiple sclerosis, let’s first take a look at each condition and the characteristics that define them.

As mentioned, the condition’s most common form is adolescent idiopathic scoliosis (AIS), with no known single cause; this form makes up for 80 percent of known diagnosed cases.

The remaining 20 percent have known causes, and it’s this group that neuromuscular scoliosis (NMS) falls into; the others are congenital scoliosis, degenerative scoliosis, and traumatic scoliosis.

The most common form of scoliosis (AIS) is a structural deformity of the spine where it curves abnormally to the right and rotates; there has to be rotation present and the curvature has to measure at more than 10 degrees to be classified as scoliosis.

In atypical forms of the condition, the spine might bend to the left and/or there is another underlying condition responsible for its development.

Scoliosis is a progressive and incurable condition with close to seven million people currently living with it in the States alone.

While scoliosis is far more commonly diagnosed between the ages of 10 and 18, adults can develop it too. Common forms of adult scoliosis are idiopathic (adolescents who didn’t know they had the condition until adulthood), degenerative, and neuromuscular.

Neuromuscular scoliosis is the second most common form of the condition. 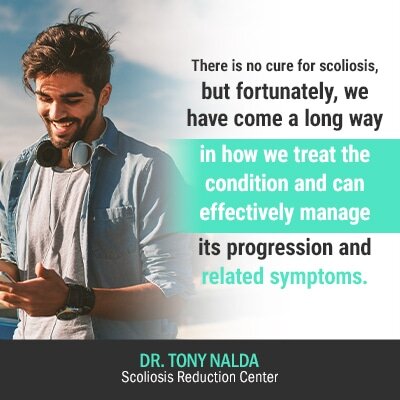 There is no cure for scoliosis, but fortunately, we have come a long way in how we treat the condition and can effectively manage its progression and related symptoms.

Multiple sclerosis is a disease of the central nervous system (made up of the brain and spinal cord).

When MS is present, the body’s immune system starts to attack the myelin sheath (protective covering) of nerve fibers, and this disrupts the communication between the brain and the body. Over time, MS can cause permanent and irreversible nerve damage and deterioration.

Like scoliosis, there is a wide range in condition severity and experienced symptoms. Depending on the extent of nerve damage and the nerves affected, some people can lose the ability to walk on their own; others can have periods of remission where no new symptoms appear.

Also, like the most common form of scoliosis, the cause of multiple sclerosis remains unknown. Multiple factors such as family history, age, race, gender, infection, climate, autoimmune disease, and vitamin D levels are thought to play a role in its development.

In addition to the development of neuromuscular scoliosis, people with multiple sclerosis can develop the following complications: muscle spasms or stiffness, bladder, bowel, and sexual-function issues, paralysis (most commonly in the legs), mental changes such as unpredictable mood swings and forgetfulness, epilepsy, and depression.

Like scoliosis, there is no known cure for multiple sclerosis, but there are treatment methods known to help recovery from attacks, stretch remission periods, influence the  progression of the disease, and manage symptoms.

Now, let’s talk about the form of scoliosis that can develop as a complication of multiple sclerosis: neuromuscular scoliosis.

Now that we have defined both scoliosis and multiple sclerosis, you can see that the most common form of scoliosis (AIS) and MS share both significant similarities, and differences.

Similarities Between Multiple Sclerosis and Scoliosis

Both involve the brain and spinal cord, which work in tandem to form the central nervous system: in charge of relaying signals and messages from the brain to the rest of the body.

Both have unknown causes and are thought to develop due to a combination of variables that can differ from person to person, and both can develop across a wide severity spectrum and produce a number of different symptoms and related complications.

Both conditions are progressive and incurable.

Differences Between Multiple Sclerosis and Scoliosis

Now, in a typical form of scoliosis, such as AIS, it is a structural issue. As it involves the spinal cord which works in tandem with the brain to control the body’s responses, reflexes, and movement, it affects the CNS, but the deformity is not a disorder of the CNS; MS is a disease of the CNS.

Scoliosis is a structural issue, while multiple sclerosis is an autoimmune disease of the central nervous system.

How Multiple Sclerosis can Lead to Neuromuscular Scoliosis

For people who have been living with MS, the development of neuromuscular scoliosis can be the result of degenerative changes to the spine; this is associated with asymmetric weakness in the muscles and ligaments that surround and support the spine.

For people with MS, their immune system is attacking the protective layer (myelin sheath) that covers the brain and spinal cord’s nerve fibers, and this exposes the nerves and disrupts the messages that travel along those nerve fibers.

In the same way, the nerves and the messages they are transmitting throughout the body need to be protected, and when they are not, problems will arise.

It’s the impairment of the central nervous system in MS that adversely affects the muscles and connective tissues supporting the spine. When this happens, the spine is no longer being adequately supported and can slip out of alignment: the onset of neuromuscular scoliosis.

In NMS, the cause of its onset is known; it’s due to the impairment of the CNS caused by the effects of multiple sclerosis.

MS patients who develop neuromuscular scoliosis not only have the scoliosis that develops to deal with, but also the dominant underlying disease to address, along with its related symptoms and potential additional complications.

As MS is the more dominant medical condition, its complications can include the development of neuromuscular scoliosis, but not vice versa as scoliosis is a structural issue secondary to the neurological/muscular disease that is multiple sclerosis.

So can scoliosis lead to multiple sclerosis? No, it cannot because as a structural issue, it can affect the central nervous system, but is not a disorder of the CNS; however, the reverse is true that MS can lead to the development of neuromuscular scoliosis.

If scoliosis is left untreated, it will not lead to the development of multiple sclerosis. In most cases, untreated scoliosis will simply continue to progress at varying rates, and as it progresses and the curvature gets larger, scoliosis-related complications and symptoms such as postural changes and discomfort are likely to increase.

If multiple sclerosis is left untreated, a wide range of issues can emerge, including increasing damage to the structure of the spine as the joints face degenerative changes, and this can lead to the spine slipping out of alignment and rotating: the defining characteristics of scoliosis.

Treating neuromuscular scoliosis patients are some of my most difficult cases. I cannot give these patients as positive a prognosis as I do with my typical scoliosis cases because there is a larger medical condition at play, and that is the underlying cause of the scoliosis.

Just as when I’m treating a more common form of scoliosis, in order to treat it effectively, I have to address the underlying structural nature of the condition; when treating NMS in an MS patient, the underlying cause is the MS, which has to be the primary guide for treatment.

Regardless of the form of scoliosis you might be facing, over the years, there have been a lot of advancements in our understanding of the condition and how to treat it as effectively as possible.

If you or a loved one has recently been diagnosed with scoliosis, here at the Scoliosis Reduction Center, we are here to answer all your questions and address any concerns you might have.