Can Scoliosis Decrease Height? Can It Make You Shorter?

Most of us have likely laughed or joked about shrinking as we get older, but how many actually understand why that is? For people with scoliosis, a decrease in height is related to far more than just the degenerative effects of aging; it’s related to the health of the spine.

As scoliosis is an abnormally-curved spine, this can produce a lot of postural changes and give the body an overall asymmetrical appearance. We’ve all likely been told to “stand up straight” at some point in our lives. For people with scoliosis, the inability to stand fully erect can be impossible, and is far more than just bad posture.

Before we address the current question of how scoliosis can make you shorter, let’s first take a look at some condition characteristics and basic spinal anatomy. Then we will move on to how scoliosis can decrease trunk height.

Obviously, there are a lot of factors that play into a person’s height; genetics and posture are the two significant ones.

In addition, spine health also plays a role. In most people, the spine is made up of 33 individual vertebra that are stacked on top of one another and separated by intervertebral discs.

The discs that sit between each vertebrae help cushion the bones of the spine and prevent them from grinding up against each other.

They also facilitate the spine’s flexibility, act as connective ligaments holding the vertebrae together, and help the spine absorb impact and evenly distribute it.

In addition to making the spine stronger and facilitating movement, the spine’s natural and healthy curvatures, of which there are three main ones, also allow us to maintain good posture and stand upright.

If there is a loss of one or more of the spine’s healthy curvatures, the overall health and function of the spine can be affected.

Regardless of the height a person is at the time of their diagnosis, scoliosis, especially if left untreated, or in severe forms, has the potential to significantly impact a person’s standing height.

This leads us into discussing the different severity levels, types of scoliosis, and how these factors can affect a person’s height.

When a person is diagnosed with scoliosis, their condition is further classified based on age, cause (if known), severity level, and location of the curvature.

The big determining factor in severity level is the patient’s Cobb angle. This is a measurement taken from the curvature’s most-tilted vertebrae; it’s taken in degrees and tells us how much a patient’s spine bends and rotates.

It’s not enough for a spine to only have an abnormal curvature to be diagnosed as scoliosis; it has to bend to a certain degree (over 10 degrees), and also has to include rotation. The rotational component makes it more than just an issue of chronic bad posture.

The different severity levels of scoliosis are as follows:

Moderate scoliosis - Cobb angle measurement of between 25 and 40 degrees

Just to give you an idea of how much of a variance there is within this severity spectrum, the largest curvature I’ve seen was 150 degrees. From 10 to 150 degrees is a huge severity range.

This is why I always preface discussions of scoliosis with saying that just because you have it, doesn’t mean you will experience all of its potential symptoms; every case is as unique as the patients themselves.

As condition severity is determined by curvature size, the more severe a person’s scoliosis is, the more likely they are to experience severe symptoms and significant postural changes, which can lead to a decrease in height. 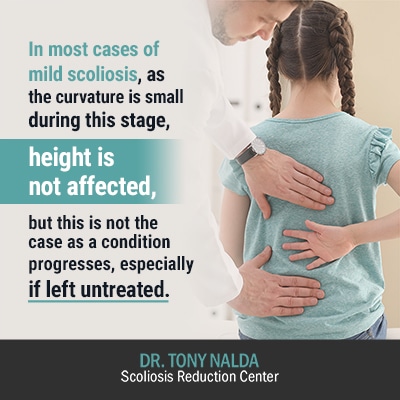 In most cases of mild scoliosis, as the curvature is small during this stage, height is not affected, but this is not the case as a condition progresses, especially if left untreated.

Let’s now move on to exploring the different types of scoliosis and how particularly severe forms can decrease height.

Scoliosis is a complex condition; as such, there is not just one general form. Scoliosis can develop at any age and any location along the spine.

A big determinant of condition form is what has caused it to develop. Sometimes, these causes are known, but often, they are not.

The most common form of the condition is known as adolescent idiopathic scoliosis (AIS), and this is diagnosed between the ages of 10 and 18, accounting for 80 percent of known diagnosed cases.

The ‘idiopathic’ classification means there is no known single cause; instead, the etiology of AIS is considered to be multifactorial.

In AIS cases, these patients have not yet reached skeletal maturity. It can be difficult to monitor and measure the direct effect of AIS on height as the spine is continuously growing.

Scoliosis Forms with a Clear Cause

As AIS accounts for 80 percent of diagnosed cases, the other 20 percent are different types because they have known causes; these include congenital, neuromuscular, traumatic, and degenerative.

While all of these forms involve a spine that abnormally curves to the side and includes rotation, in these cases, the scoliosis has developed because of a larger medical issue: bone malformation that developed in utero, the presence of neuromuscular disease such as cerebral palsy or muscular dystrophy, a spinal injury due to trauma, or the degenerative effects of aging.

These cases of scoliosis are more complex for me to treat because there is a larger medical issue behind the development of scoliosis, and this larger issue has to be the guiding force of treatment.

Neuromuscular scoliosis (NMS) is a particularly aggressive form and has the potential to greatly impact a person’s height; this is because neuromuscular scoliosis can make a person nonambulatory (unable to move on their own) and wheelchair-bound, and NMS patients also have a very high risk of progression. 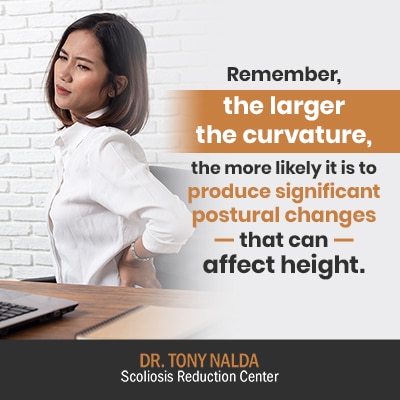 Remember, the larger the curvature, the more likely it is to produce significant postural changes that can affect height.

While being nonambulatory is not the same as shrinking or losing actual inches of height, if a person is wheelchair bound, obviously, their ability to stand up on their own and remain upright is compromised.

For NMS patients who are nonambulatory, the constant pressure on the spine from sitting also contributes to a loss of height over time.

NMS develops in patients who have a pre-existing condition affecting the muscles and ligaments that support the spine; this is why these cases have a very high risk of progression.

Not only do these patients have the challenge of living with a neuromuscular condition, they also have the scoliosis that develops as a result to cope with.

Another form of scoliosis known to have a strong potential for affecting height is degenerative scoliosis; these patients are adults who have reached skeletal maturity and whose spines are not as healthy as they once were.

We touched on this earlier, but as a person ages, the spine faces the cumulative effects of years of wear and tear.

Even for people without scoliosis, spinal degeneration can accompany aging, and for those whose intervertebral discs have been affected, this is likely to decrease trunk height.

While getting older doesn’t automatically lead to an unhealthy spine, the cumulation of lifestyle choices such as bad posture, diet, lifting improperly, and low activity levels can play a role in just how healthy a person’s spine stays as they age.

When it comes to degenerative scoliosis, it’s often the intervertebral discs that really feel the effects of aging and lifestyle choices.

The intervertebral discs separate the vertebrae of the spine so they don’t rub up against each other; they also facilitate movement, act as ligaments holding the spine together, and help to spread the stress of impact evenly throughout the spine.

Basically, they act as the body’s shock absorbers.

If an intervertebral disc starts to erode, this can cause the adjacent vertebrae attached to it to slip out of alignment and scoliosis to develop as a result.

As the intervertebral discs degenerate, they lose height as they don’t have their own vascular supply to rebuild themselves, and this can lead to a loss in the spine’s vertical height.

Can Scoliosis Affect My Height?

Can Scoliosis Make You Taller?

As a spine’s given length will experience a decreased vertical height when it’s curved, what happens when that curvature is reduced due to successful treatment?

Cosmetic concerns are often the most worrying for people freshly diagnosed with scoliosis, especially for adolescents and teenagers.

As mentioned, the spine of a person with scoliosis will not be as long as it would have been, had it not developed the condition; this is because the spine abnormally bends to the side, instead of keeping its natural and healthy curves that allow us to maintain optimal posture and stand upright.

Although there is no simple formula for determining exactly what type of height gain a patient will experience with a correction, reducing a person’s scoliotic curve can counteract the postural changes caused by the scoliosis.

As the connection between scoliosis and loss of height is linked to the severity of the abnormal curvature, using proactive treatment to reduce curvature severity can help restore that loss of height.

Here at the Scoliosis Reduction Center, we take great pride in the results we have achieved with our functional treatment approach.

There are few things more thrilling than seeing how much a curvature reduction improves upon any and all related symptoms: loss of height being one of them.

The more the spine’s healthy curves are restored, the higher the potential height gain is as the spine is becoming straighter, and postural asymmetries are being corrected as the abnormal curvature is reduced.

So can scoliosis make you taller? No, the condition cannot make you taller; however, a curvature reduction achieved through a proactive treatment approach can help restore a loss of height.

Scoliosis has the potential to impact multiple areas of a patient’s life; in the context of scoliosis-related cosmetic changes, a loss of height can be a common result of a scoliotic curve increasing in size.

The more severe the condition, particularly in neuromuscular and degenerative scoliosis, the greater the potential for a loss of height as these curvatures are at a high risk of rapid progression.

So to clearly answer the question, can scoliosis make you shorter: yes, it can. The worse a curvature gets, the more it bends unnaturally to the side, and this structural change can decrease height.

That being said, for some patients, treatment can help regain some, or all, of those lost inches. While there are different treatment options available, a proactive approach that achieves a curvature reduction can result in restoring as much of a patient’s pre-scoliosis standing height as possible.