Just as the end goal of traditional treatment isn’t correction, but stopping progression, the same can be said of the most widely-used traditional brace: the Boston brace. The ScoliBrace addresses many of the shortcomings associated with traditional bracing through its ultra-corrective and customized design.

Just as different scoliosis treatment approaches offer patients different potential outcomes, not all scoliosis braces are created equal. The Boston brace is a traditional brace used to stop progression, while the modern ScoliBrace is one that offers corrective potential.

As the different scoliosis braces reflect the divergence between the two main scoliosis treatment approaches, let’s start with traditional versus conservative treatment.

The two main scoliosis treatment approaches for patients to choose between are traditional and conservative.

It’s important that patients, and their families, fully understand the differences because committing to one over the other can have far-reaching effects.

While scoliosis isn’t curable, it is highly treatable, but how a condition is responded to can have life-long consequences, so I want to ensure that patients’ treatment expectations are aligned with the potential reality of their outcomes.

So how and when a treatment approach responds to a scoliosis diagnosis is an important factor in potential treatment efficacy and making long-term sustainable improvement.

As the traditional approach was the dominant choice for many years, let’s start there.

The traditional scoliosis treatment approach has been in place for hundreds of years but has changed little over those years, despite our growing understanding of the condition and how it responds to treatment.

Traditional treatment is about watching and waiting for signs of progression and then responding once a condition has progressed to the point of making the patient a candidate for spinal fusion surgery.

Spinal fusion involves fusing the most-tilted vertebrae at the apex of the curve into one solid bone, and then rods are commonly attached to the spine with screws to hold it in place; this eliminates movement (progression) in the fused section of the spine.

When successful, spinal fusion can make a crooked spine straight, but what many patients are disappointed with is their loss of spinal flexibility and range of motion, making them unable to participate in some of the activities they once loved and making some patients fearful of trying new things.

While all surgical procedures come with their share of risks, spinal fusion is a lengthy and invasive procedure with heavy potential side effects and risks of complications.

The way a scoliosis diagnosis is responded to under traditional treatment is described as reactive rather than the proactive response characteristic of conservative treatment.

Also known as functional or chiropractic centered, a conservative scoliosis treatment approach has achieving corrective results as its ultimate goal.

A conservative treatment approach is what patients of the Scoliosis Reduction Center benefit from as we strive to preserve as much of the spine’s natural function as possible.

Conservative treatment responds proactively by starting treatment as close to the time of diagnosis as possible; as scoliosis is a progressive condition, it’s in its nature to get worse over time, especially if left untreated or not treated proactively. 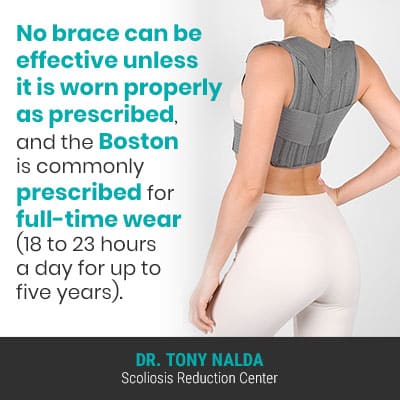 Conservative treatment wants to achieve corrective results on a structural level, meaning a curvature reduction, so as much of the spine’s healthy curves as possible are restored and spinal biomechanics are improved.

By combining different condition-specific treatment disciplines, I can impact conditions on multiple levels and sustain those results by including a maintenance program for patients to follow from home.

Through chiropractic care, I can work towards manually adjusting the most-tilted vertebrae at the apex of the curve back into a healthier alignment with the rest of the spine.

Through a variety of therapies and scoliosis-specific exercises (SSEs), I can help patients increase their core strength, so the spine is optimally supported by its surrounding muscles.

Corrective bracing can help augment results achieved by the aforementioned forms of treatment by pushing the spine into a corrective position.

What is the Boston Brace?

The Boston brace is the most widely-used traditional scoliosis brace, but it’s associated with a number of shortfalls that are known to limit its efficacy.

Firstly, the Boston works by squeezing the spine unnaturally from the sides via a three-point-pressure system to make it straighter, but squeezing an already-weakened spine can make it even weaker over time, not to mention increase related postural deviation.

The Boston is limited in its efficacy because it doesn’t address the condition’s true 3-dimensional nature.

In addition, the Boston brace is mass-produced and not customized to suit a patient’s specific body and curvature type, making it bulky and cumbersome to wear and causing compliance issues.

No brace can be effective unless it is worn properly as prescribed, and the Boston is commonly prescribed for full-time wear (18 to 23 hours a day for up to five years)

So let’s summarize why the Boston brace doesn’t work:

An effective Boston brace alternative can be found in the modern and ultra-corrective ScoliBrace.

What is the ScoliBrace?

The modern ScoliBrace represents the culmination of what we have learned about scoliosis and bracing efficacy over the years and is the brace of choice used by a modern conservative treatment approach.

The ScoliBrace addresses the condition as 3-dimensional and works by pushing it into a corrective position, not squeezing it, so the spine is not weakened.

As the ScoliBrace has corrective potential, it actually improves related postural deviation as the unnatural spinal curve is slowly being reduced.

In addition, the ScoliBrace relies on state-of-the-art scanning technology to ensure that each and every brace is fully customized to suit each patient’s body and curvature type, making it more comfortable to wear and leading to better compliance rates.

To be clear, no scoliosis brace, on its own, will be enough to reduce scoliosis effectively, but when combined with other forms of proactive treatment, as it is under a conservative treatment approach, the ScoliBrace has the potential to augment corrective results achieved by other forms of treatment. 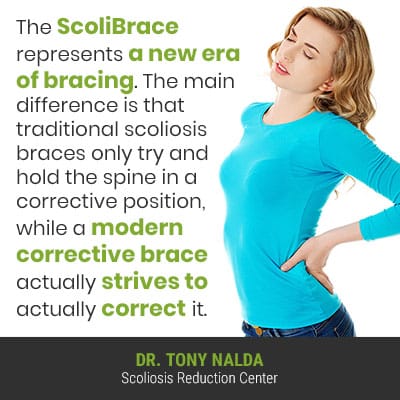 Under a conservative approach, multiple treatment disciplines are integrated so the condition is impacted on every level: condition-specific chiropractic care, in-office therapy, custom-prescribed home exercises, and corrective bracing.

So let’s summarize the reasons why the ScoliBrace works:

The ScoliBrace represents a new era of bracing. The main difference is that traditional scoliosis braces only try and hold the spine in a corrective position, while a modern corrective brace actually strives to actually correct it.

The Boston brace for scoliosis is the only form of traditional treatment applied before a patient progresses to the point of becoming a candidate for spinal fusion surgery.

The main issues with the Boston are that it doesn't address the condition as 3-dimensional, squeezes the spine unnaturally, weakening it and increasing postural deviation, is bulky to wear, so it has compliance issues and isn’t customized to suit patients’ body/curvature types.

The traditional approach to scoliosis treatment favors the use of the Boston brace because their treatment goals are aligned: stopping progression.

The modern and corrective ScoliBrace addresses many of the shortcomings associated with the Boston by addressing the condition’s true 3-dimensional nature, pushing the spine rather than squeezing it, improving postural deviation, customizing each brace so it’s more comfortable, producing better compliance rates, and complementing other forms of treatment.

A conservative approach to scoliosis treatment favors the ScoliBrace for its dynamic and modern design and its corrective potential.