What is Scoliosis Surgery?

Once an abnormal spinal curvature reaches the surgical-level threshold, those undergoing traditional scoliosis treatment will be funneled towards spinal-fusion surgery. This is the most common form of scoliosis surgery and involves attaching metal hardware to the spine to hold it in place while the affected vertebrae fuse.

A lot of people assume that scoliosis surgery fixes scoliosis. The truth is that nothing can ‘fix’ scoliosis; what spinal fusion surgery does is make the spine straighter and hold it in place. Continue reading to learn more about the process of scoliosis surgery, potential side effects, and how and why its treatment goal has evolved.

What Does Scoliosis Surgery Involve?

In the traditional treatment route, scoliosis surgery is generally recommended when scoliotic curves are considered severe, meaning greater than 40, 45 degrees. In these cases, spinal fusion surgery is recommended for the area of the spine that’s affected.

Normally, it’s anywhere from 12 to 14 vertebrae that are fused in scoliosis surgery, and what that means is that those vertebrae will have screws and rods attached that prevent mobility in that part of the spine.

While spinal fusion is the most common form of scoliosis surgery, there are other types as well.

Other Forms of Scoliosis Surgery

Although there are currently other forms of scoliosis surgery, because they’re relatively new, there’s no long-term data on potential side effects or the longevity of surgical results.

This is still a form of fusion because the cable’s preventing any kind of motion. The idea is that if the surgery is done while the patient is young enough, they might be able to pull that cable out or loosen it to restore some motion.

In addition to the fact that we’re lacking data on the long-term effects of spinal-fusion, there are also numerous other potential side effects and complications that can occur.

Scoliosis Surgery: When is Surgery Needed?

Any surgery carries risks and spinal fusion is no exception. Considering the spine is connected to multiple systems at work within the body, spinal surgery is lengthy, complex, and can affect people in multiple ways.

One such complication that people don’t necessarily consider is how the body will react to the metals the hardware is made from. There is some data on the potential toxicity of the metals used, but still, no one knows exactly how that develops over the lifespan of a fusion.

There was also some research done on Chinese patients who’d had scoliosis surgery. After these people passed away, their rods were looked at and corrosion was evident, most likely from the immune system attacking these foreign elements inside the body. 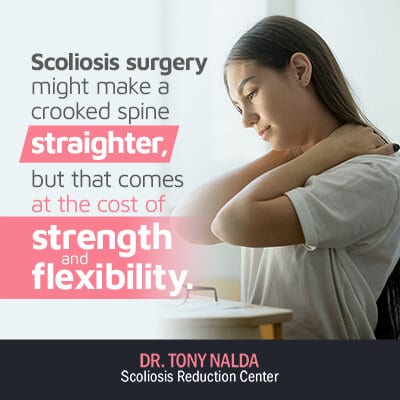 Scoliosis surgery might make a crooked spine straighter, but that comes at the cost of strength and flexibility. With a spine that’s held in place, it’s less able to effectively distribute force evenly throughout, meaning it can snap easier. It’s also more rigid, which accounts for flexibility issues and is associated with lung impairment.

People have been known to have allergic reactions to the metals used and the hardware can also fail; screws can come loose and rods can bend. The fusion site can also become infected. In these types of situations, corrective surgeries can be necessary in addition to the initial scoliosis surgery.

When a portion of the spine is fused, the bones directly above and below go through much faster wear, and that can cause what’s known as ‘failed back surgery syndrome’. When a spinal-fusion surgery has failed due to one of the aforementioned reasons, the only thing that can be done is more surgery to extend the fusion.

Scoliosis surgery can also be performed on patients while they’re too young. When spinal fusion is performed, it prevents subsequent growth in the bones that are fused, so when done too early, the surgery can actually cause stunted growth in that area.

Even if severe scoliosis was detected in a 10-year-old patient, they’re hesitant to do the surgery because the patient is still rapidly growing and developing, and they don’t want to risk stunting the growth of the entire spine.

The general consensus amongst doctors who treat scoliosis conservatively is that the results of spinal-fusion surgery aren’t permanent and that another surgery will be forthcoming in 20, 25 years; this is the best-case scenario.

The general consensus is the older you are, the less scoliosis surgery becomes a favorable treatment option because of the risks associated with it. At this point, when patients are passed that ideal age, conservative treatment is really the only option.

Considering the invasiveness of scoliosis surgery, and the monetary cost associated with it, people should first look into alternative forms of treatment that are more natural and less invasive.

This is where we come in at the Scoliosis Reduction Center as our goal is to reduce curvatures before they progress to that surgical-level threshold; we do this through a combination of various forms of treatment including exercise, therapy, rehabilitation, bracing, and chiropractic care.

Another interesting aspect of scoliosis surgery is how its goal has changed along with its evolution.

The Changing Goal of Scoliosis Surgery

The primary goal of scoliosis surgery is to stop progression. The secondary goal is to reduce the curve, and the reason that reduction is now a potential outcome is because of advancements made in the hardware used.

Often, history can be changed by a seemingly small development; this is the case with scoliosis surgery and the pedicle screw. A pedicle screw is a bone screw designed specifically for implantation into vertebral pedicles: dense structures that project from the bottom of each vertebra.

Scoliosis surgery was initially designed as an attempt to stop progression in high-risk cases. The surgery, when it first emerged, wasn’t regarded as a way to reduce scoliosis, but to prevent a patient’s scoliosis from getting worse. 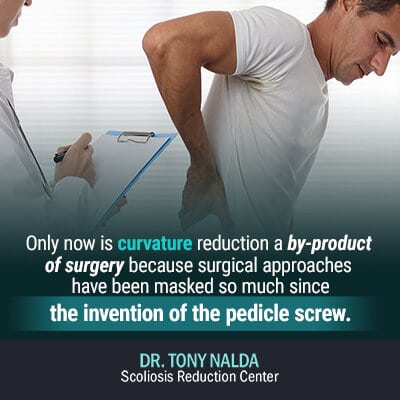 Only now is curvature reduction a by-product of surgery because surgical approaches have been masked so much since the invention of the pedicle screw.

Why is a Screw so Important?

The pedicle screw is what allows surgeons to use screws that can go through the pedicles of the vertebrae. Before, surgeons used hooks attached from the side, but those hooks didn’t allow as much of a reduction because they couldn’t screw into the vertebrae as well.

Since the invention of the pedicle screw, the surgery could be much more aggressive, but as a result, the surgery had to become more invasive to achieve reduction results. Instead of placing two hooks inside the bottom and top of the two rods to attach to the vertebrae, scoliosis surgery evolved to include placing two screws in every single vertebra down the entire length of the rod.

So with 12 vertebrae fused, you would have a total of 24 screws in your spine, as opposed to just four hooks. While this new approach allowed for better results in terms of curvature reduction, the surgery became far more complex, lengthy, and invasive.

Scoliosis surgery has evolved from its initial goal of preventing progression to include curvature reduction, thanks to the game-changing pedicle screw. As the surgery’s treatment goal changed, so too did the nature of the surgery itself as it became more invasive and complex.

When it comes to treating scoliosis, there are two main approaches: traditional and conservative. The traditional path to treatment has been in place since the condition’s early days, and it involves watching and waiting to see if a patient’s curvature progresses to the point where surgery is deemed necessary.

Although that surgical-level threshold differs from country to country, in the United States, it generally sits at curvatures with a Cobb angle measurement of 40+ degrees.

What I want people to be aware of is that the traditional course of treatment is not the only option. While scoliosis surgery can indeed make a crooked spine straighter, there’s not enough long-term data for us to fully understand the long-range impacts of scoliosis surgery.

What we do know is that more natural forms of conservative treatment such as exercise, therapy, rehabilitation, and chiropractic care offers amazing results and allows patients to avoid the many known and unknown complications of spinal-fusion surgery.

The conservative path of treatment strives to avoid surgery, and here at the Scoliosis Reduction Center, our patients have access to multiple forms of treatment that complement each other.